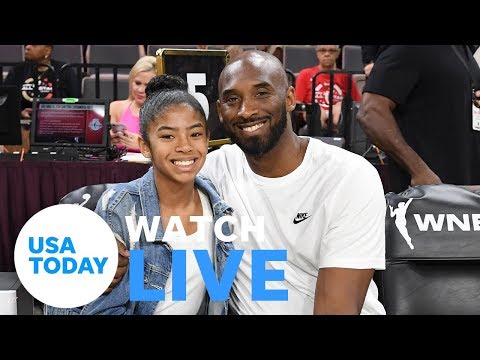 What we know, updates from public service


Los Angeles will come to a stop Monday to publicly memorialize Kobe and Gianna Bryant at the Staples Center.

When Vanessa Bryant announced the pubic service on Instagram earlier this month, she pointed out the symbolism in the date: 2/24/20.

Two for the number Gianna, aka “Mambacita,” wore.  Twenty-four for the number Kobe wore during the second half of his career. And twenty, for the years Kobe and Vanessa spent together.

Kobe and Gianna were buried in a private ceremony on Feb. 7, according to records.

It is sure to be an emotional event. Follow along with USA TODAY Sports for live updates.

The daily flat rate at public parking lots close to Staples Center has been hiked and street vendors are out in force Monday with three hours before the memorial service for Kobe Bryant and his 13-year-old daughter Gianna.

“That’s the story, right?” a parking lot attendant told USA TODAY SPORTS with a smile while declining to give his name. “Everybody’s making a profit on Kobe.”

Things were more affordable down the street. Vendors were selling Kobe beanies, caps and T-shirts for $10 apiece.

One vendor said that has been here for 24 hours.

“No shower,” she said with a grin.

The image of Kobe Bryant and his 13-year-old daughter Gianna are on omnipresent near Staples Center on Monday as the memorial service for both approaches.

In addition to T-shirts and other merchandise bearing their images, they’re also pictured together on a massive electronic billboard.

And on a retaining wall in front of a car wash, someone has spray-painted, “RIP KOBE & GIGI.”

Meanwhile, hundreds of ticket-holders for the memorial service already are standing in line, with doors to Staples Center expected to open at about 8 a.m.