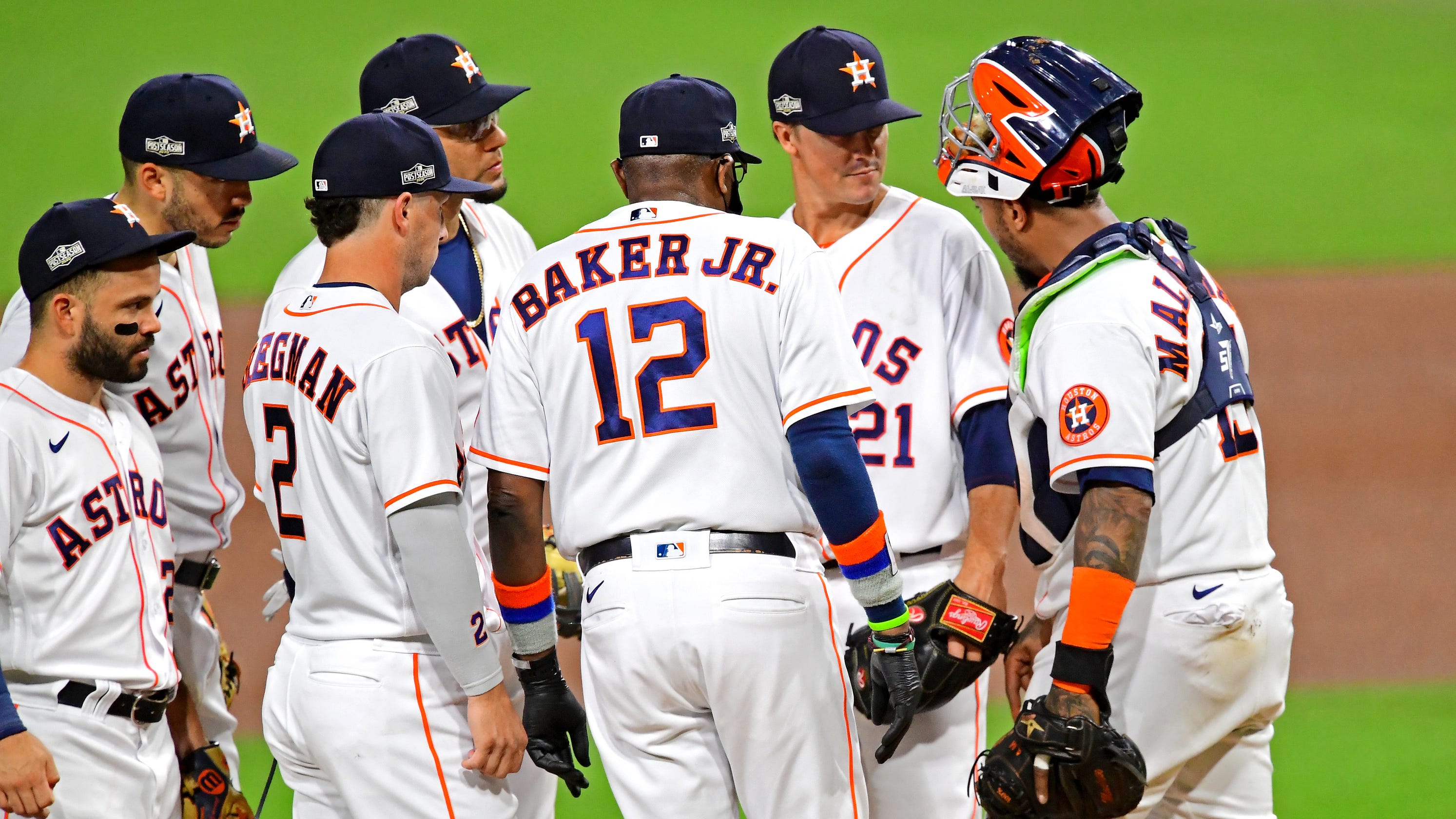 And baby, did it work.

The Astros showed the baseball world that it’s still cool to trust your instincts, follow your heart, and say a few prayers.

The Astros staved off elimination, beating the Tampa Bay Rays, 4-3, in a game that will be remembered for Baker’s gamble, guidance, counselling, and faith in the players he inherited in the wake of the cheating scandal that threatened to tear apart the fabric of the team.

“I’ve been impressed,’’ said winning pitcher Zack Greinke, who yielded five hits and two runs, striking out seven, for his first postseason victory in 11 starts. “He reads people really good. I don’t think I’ve ever seen him make a wrong decision when he trusts what he sees. I think he sees the right thing almost 100% of the time.

“He’s been impressive in that regard.’’

Baker worked his magic before the game, huddling with struggling second baseman Jose Altuve in the infield, telling him that he was going to be like the late, great Hall of Famer Joe Morgan. He spoke to his team in the clubhouse and told them that he’s not ready to go home, and the next trip he wants to take is to Arlington, Texas, for the World Series.

And then, there was that moment of truth in the sixth inning, with the Astros’ season on the line, and Baker having to make perhaps the most critical in-game decision of the year.

The Astros were clinging to a 4-2 lead with one out in the sixth when Randy Arozarena, who had already homered for the fifth time this postseason, the second-most by any rookie in history, was at the plate with runners on first and second and one out.

Baker strolled out to the mound prepared to take Greinke out of the game. The bullpen gate opened. Reliever Ryan Pressly walked halfway down the steps.

“I usually don’t change my mind,’’ Baker said, “but I hadn’t had my mind really, really made up until I got out there. I saw the look in Zack’s eyes. Maldy was adamant that he can get this guy. I said, ‘Ok, you got it.’

“It was more old school, doing the right thing that I thought was right.’’

Greinke, winless in his last 10 postseason starts, never said a single word, but Baker found the answer in his eyes.

Yep, just like he did years ago when managing Washington Nationals ace Max Scherzer, who has heterochromia iridis, with his left eye brown and his right eye blue.

Baker left him in and Scherzer got the out.

“I can’t lie to you,’’ Baker said, “there were some prayers involved on the way back to the dugout.

Greinke, believing he was going to be removed himself, watched Baker walk away, and suddenly felt a surge of faith.

Greinke still is haunted from the decision a year ago in Game 7 of the World Series. He was pitching with a 2-1 lead in the seventh inning against the Nationals, and after allowing a home run and a one-out walk, Astros manager A.J. Hinch pulled him for reliever Will Harris.

Howie Kendrick greeted Harris with a two-run homer that hit the right-field foul pole, the Nationals took the lead, and won the Series.

“That was one example,’’ Greinke said, “but there’s probably a dozen examples if you look back at it.’’

Greinke started Arozarena with a changeup down and away, and Arozarena swung and missed. Then, Ball 1, a changeup inside followed by a foul ball on a four-seamer on the outside part of the plate. Then another, Arozarena swung, tried to check his swing, and was called out.

Baker punched his fist into the air and yelled.

He stayed with Greinke to face left-handed hitter Ji-Man Choi, and Choi caused more problems with a slow rolling infield single, and suddenly, the bases were loaded.

Now, with Mike Brosseau, the hero of the AL Division Series clincher over the New York Yankees at the plate, again Baker didn’t move. This was Greinke’s game to win or lose.

Greinke and Brousseau battled for six pitches, and with a full count, Maldonado went to the mound. Shortstop Carlos Correa joined them. This would be the biggest pitch of the Astros’ season.

Maldonado jumped into the air, pumped his fist, and screamed.

Greinke walked off and finally cracked a smile before entering the dugout.

“It was very intense,’’ Greinke said. “We knew it was an important time of the game. It was a tough part of the lineup facing him. It worked out.

“It felt good all of the way around.’’

Greinke walked to the dugout, was greeted by his teammates, and leaned over and thanked Baker, telling him, “I know you probably went against the book.’’

Perhaps it was old-school too that instead of inserting a different second baseman after Altuve’s three throwing errors the past two days, and using Altuve as a DH, he stuck with him, and even batted third.

The confidence boost worked magically, with Altuve hitting a homer in the first inning, a run-scoring double in the third inning, and playing flawless defense.

Yep, just like ol’ times, and the Astros staying alive for at least another day.

It’s a long shot the Astros will be there, with only one team in baseball history overcoming a 3-0 deficit, but the Astros are alive, have a bit of their swagger back, and a manager who refuses to believe they can’t pull off the miracle.