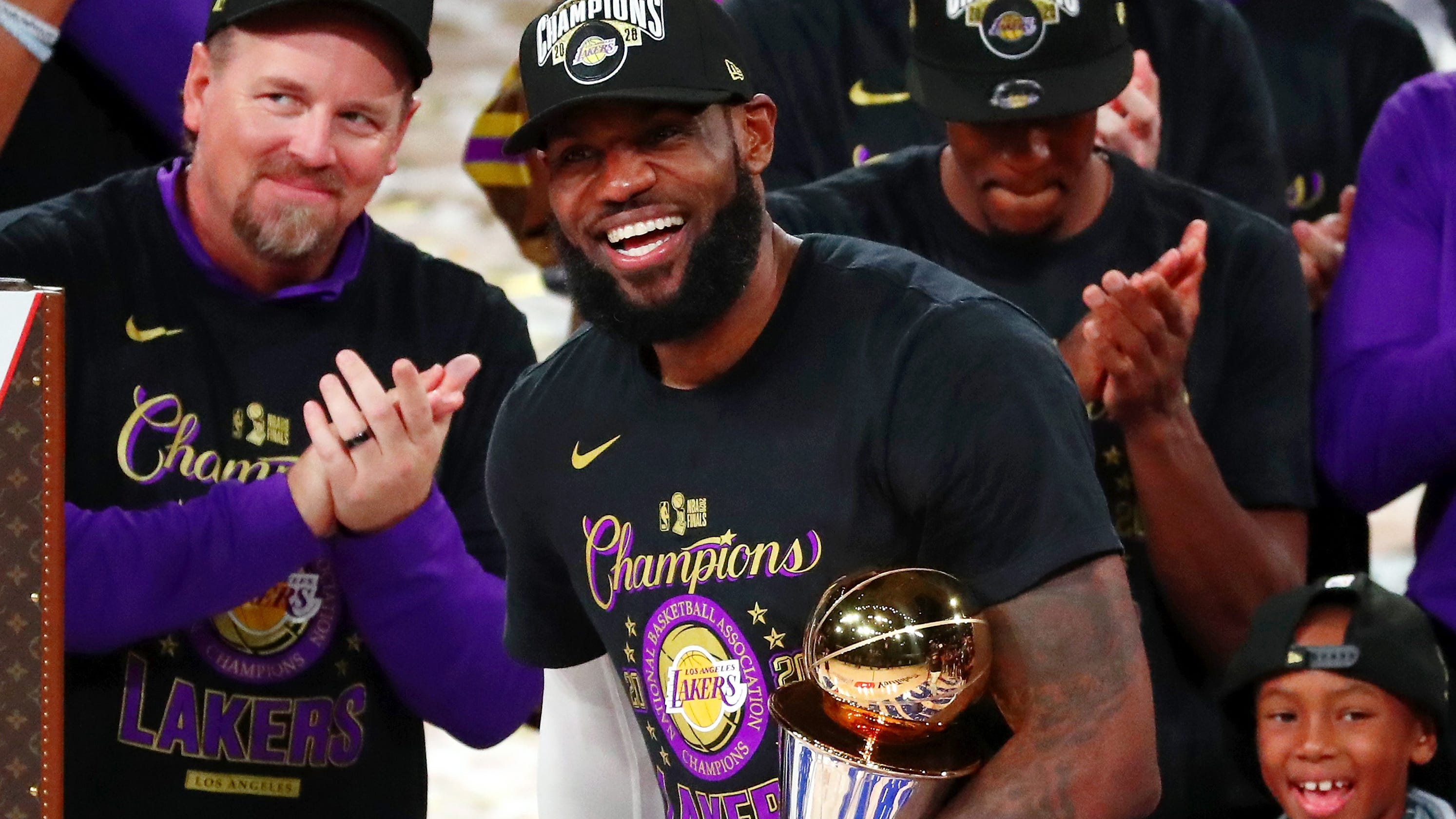 You could see LeBron James’ elation as he hoisted both the NBA’s championship and Finals MVP trophies. He had already done this three other times with two other teams. Not like this, though.

This marked the first NBA title James won with the Lakers, leading them to a 106-93 win over the Miami Heat Sunday in Game 6 of the NBA Finals. It marked the first and likely only time James won without performing before a crowd. And James did so while navigating a season that included stopping and resuming play during a pandemic, winning his fourth Finals MVP at 35 and using his platform to demonstrate he remains more than an athlete.

Because of those dynamics, James considered this “right up there with one of the greatest accomplishments I’ve had.”

TITLE NO. 17: Lakers close out Heat for record-tying 17th title

Instead of simply appreciating these feats for what they are, however, they will also be viewed through the prism of a never-ending debate. Will James ever be considered better than Michael Jordan?

Please stop with this. Sure, debating the topic at barber shops and sports bars partly captures what makes sports great. It has gotten to the point, however, that the Jordan-James comparisons have stripped appreciation away from each player’s greatness.

When “The Last Dance” documentary on Jordan and the Chicago Bulls aired in April, fans marveled at how Jordan won six NBA titles and six Finals MVPs out of six Finals appearances through intense leadership, epic performances and petty rivalries. But some commentators used the series to highlight James’ successes or shortcomings.

SportsPulse: USA TODAY Sports’ Mark Medina stands firm that we should stop trying to compare LeBron James and Michael Jordan and instead appreciate what they both brought to the game.

The same conversation emerged shortly before James won his fourth NBA title and fourth Finals MVP. Sure, the Lakers praised James on numerous fronts. They credited him for his Finals MVP performance that ended with 28 points, 14 rebounds and 10 assists in Game 6. They complimented him for elevating teammates, supporting his coaching staff and galvanizing the team through a disrupted training camp in China, Kobe Bryant’s passing and a resumed season in a bubble.

“I have always believed in LeBron James. He’s the greatest player the basketball universe has ever seen,” Lakers coach Frank Vogel said. “If you think you know, you don’t know, until you’re around him every day, you’re coaching him, you’re seeing his mind, you’re seeing his adjustments, seeing the way he leads the group.”

FOR MAMBA: Kobe and Gigi Bryant “guided this team the entire year”

Still, some just view James’ latest accomplishments by whether he has or will ever match Jordan’s.

My opinion on the comparisons: Jordan remains a better scorer, even if James surpassed him last year on the league’s all-time scoring list. James remains a better passer, even if Jordan prided himself on being a complete player. While Jordan deserves credit for keeping his teammates accountable with demanding expectations, James deserves credit for knowing how to elevate teammates.

As for all the other comparisons between Jordan and James? All are entirely circumstantial. So why waste time comparing things that aren’t comparable?

Jordan dealt with much more physical defenses during his era and would have feasted on defenses in the current one. Still, James easily could have adapted to the past generation’s style of play with his 6-foot-9, 250-pound frame and basketball smarts.

Jordan did not make the Finals until his seventh season, when Phil Jackson became the coach and they finally had an answer for the Detroit Pistons. Jordan did not follow any load management. Given how burned out he looked before his first retirement in 1993, you can’t help but wonder whether the hiatus to play baseball gave him a physical and mental recharge for his return, after he shed the rust.

It took James only four years to make his first Finals (2007), but his undermanned Cavs team was no match for the Spurs’ dynastic roster. James did not appear in the Finals again until 2011, when he spent his first season in Miami ironing out the dynamic with Dwyane Wade and Chris Bosh. The Heat then won two consecutive titles the following two years against Oklahoma City and San Antonio (2012, 2013).

Following a Finals loss the next year to the Spurs, James returned to Cleveland, only to match up against another dynasty for the next four years. A year after trying to carry the Cavs without a healthy Kyrie Irving and Kevin Love (2015), James helped the Cavs become the only team in Finals history to overcome a 3-1 deficit (2016). Cleveland had no answer the following two years against a Warriors team with four All-Stars. Aside from the 27 games he missed with a groin injury during his first season with the Lakers, James spent the rest of the decade in the NBA Finals without significant signs of slowing down.

Jordan often bristled at Bulls’ management, but it eventually constructed great rosters around him. James did not always have that luxury with Cleveland. So he took advantage of his free-agency leverage to increase his chances of winning.

James and Jordan each dealt with media scrutiny. Until Jordan won his first NBA title, critics argued he did not have what it took to lead a team. Until James won his first NBA championship, critics pegged him as someone who wilted under pressure and lacked a killer instinct.James faced more immediate scrutiny because he played during the 24/7 news cycle and social media era.

Because of the unique circumstances Jordan and James each faced, debating most of these examples  amounts to nitpicking. NBA fans should appreciate the unique path both players took to achieve greatness. In James’ case, what he experienced this season should be something to celebrate.

He collected his fourth Finals MVP in his 17th season by averaging 29.8 points, 11.8 rebounds and 8.5 assists during the series. After the Lakers went 10 years without an NBA title, he led the franchise to its 17th, tying the hated Boston Celtics for most in league history. He helped the Lakers dispatch each playoff opponent in five games. James did this in a campus bubble with no fans, limited family and a distant connection to the broken outside world.

“Thinking I have something to prove fuels me,” James said. “It fueled me over this last year-and-a-half since the injury. It fueled me because no matter what I’ve done in my career to this point, there’s still little rumblings of doubt or comparing me to the history of the game and has he done this, has he done that.”

Could Jordan have done the same thing? Sure. He would have remained consumed with the game.

But how Jordan would have fared misses the point. Celebrate James for what he has done for the game instead of just judging how it does or does not measure up to Jordan’s accomplishments.