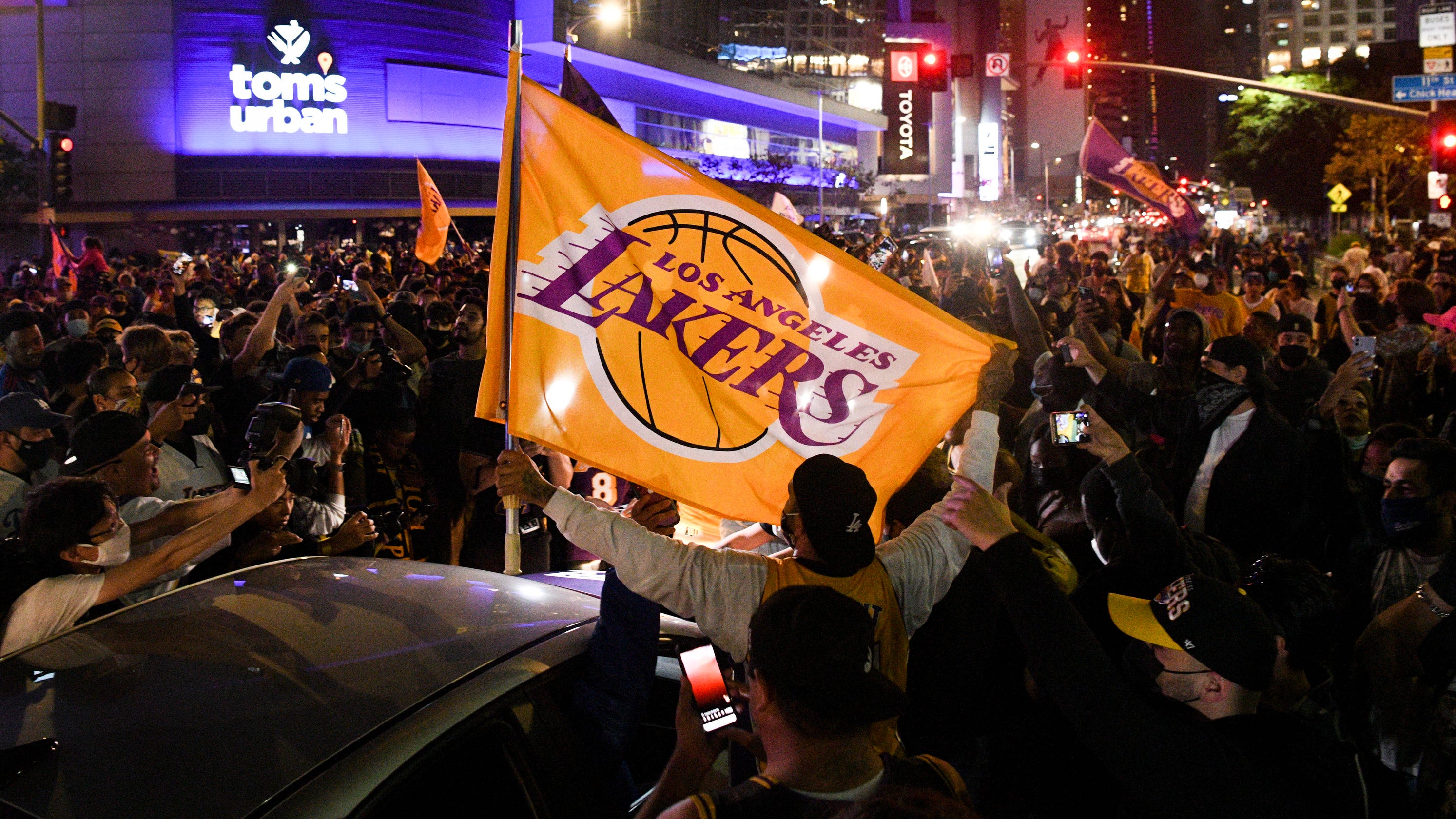 The Los Angeles Lakers captured the franchise’s 17th title on Sunday night and fans flocked to the streets to celebrate.

It has been a decade since the Los Angeles Lakers won their last championship, but their fans haven’t forgotten how to party.

Thousands spilled into the streets near Staples Center on Sunday night, and the festivities began shortly after the Lakers beat the Miami Heat 106-93 and captured their first NBA title since 2010 and 17th overall.

The pandemic couldn’t dampen the mood, with many of the revelers wearing masks, if not adhering to social distancing guidelines.

The scene was mostly peaceful but beyond boisterous. A few men clambered up construction-site scaffolding — about 50 feet in the air — and waved a Lakers flag. A few drivers burned rubber, sending thick smoke into the air. On some streets, traffic was at a standstill for about an hour.

“This is a Lakers scene,” Kregan Zelaya, 22, exulted as he held up his camera to take video. “Wild.”

Anthony Wall drove 30 minutes from Tarzana with his girlfriend and her 8-year-old son to witness it.

“This is one of the good things of 2020 here,” Wall said. “This is just a chance to come out and celebrate. I wouldn’t miss this for anything.”

Hundreds of police officers, some on horseback, others on motorcycles and most on foot mostly watched from a distance as police helicopters buzzed overhead and patrol cars and black-and-white SUVs were parked nearby. The only moment that approached confrontation was when a Lakers fan derided a policeman in a way only a Lakers fan could.

“You’re a Celtics fan,” he yelled as the officer helped seal off the street near the barricaded Staples Center, home of the Lakers.

Though LeBron James led the Lakers to the championship, it was another Laker whose name was chanted repeatedly.

Kobe Bryant, the former Lakers star who died Jan. 26 in a helicopter crash, along with his 13-year-old daughter, Gianna, and seven others. Never mind that it was James who was the Finals MVP.

More than an hour after the celebration started, it was still going strong, horns still blaring, fireworks still exploding, fans still cheering. Amid the bedlam, James Patriack wore a No. 23 James jersey and openly drank from a bottle of champagne without getting hassled by the police.

“Well,” he said with a grin, “I think they have bigger problems in the world right now.”