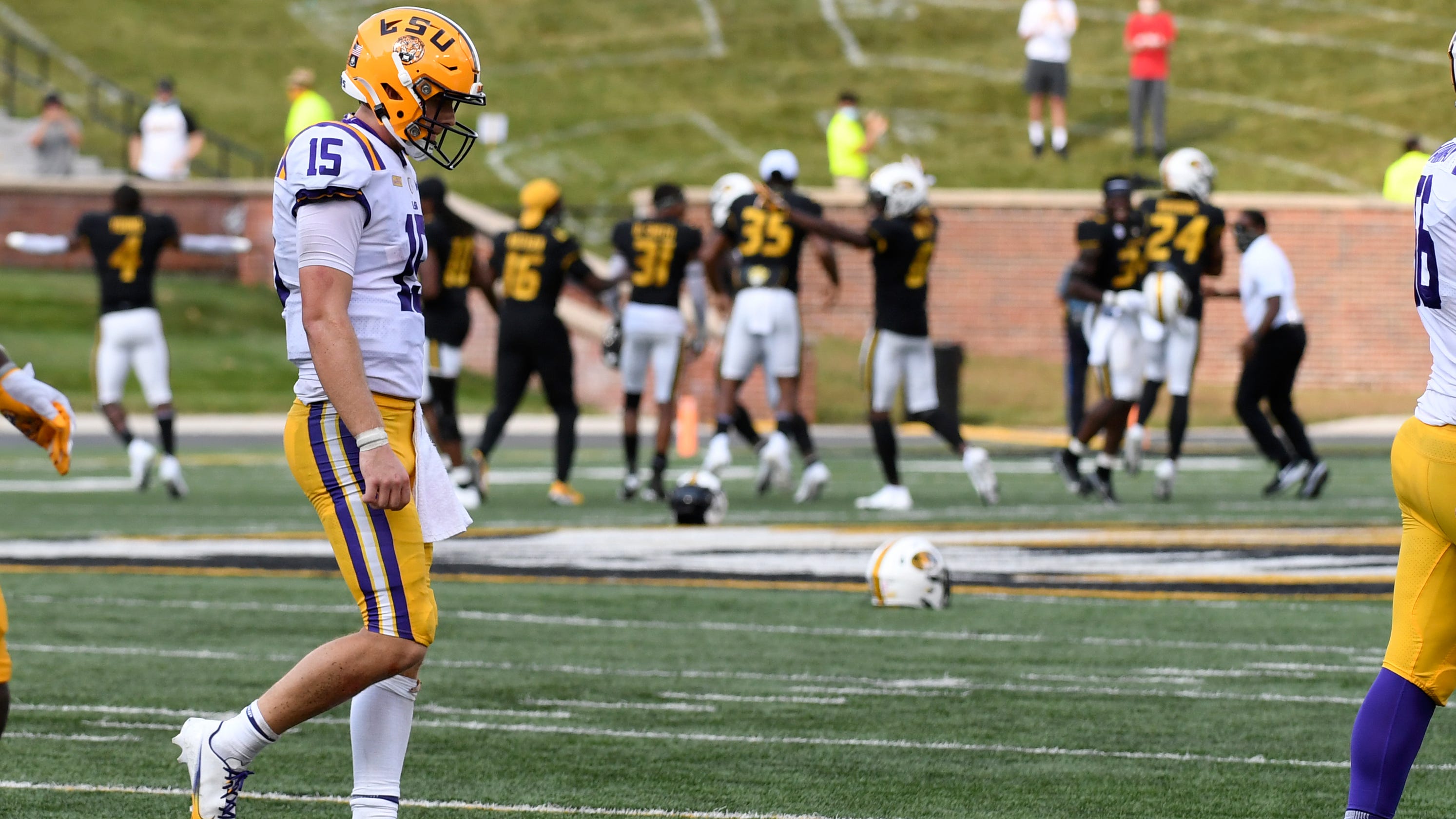 Losing to Mississippi State and Missouri in a three-game span would send any coaching staff scurrying back to the drawing board in search of answers.

That LSU has lost to the Bulldogs and Tigers on the heels of last year’s national championship leaves the Tigers’ season teetering on the brink even before encountering the meat of the conference-only schedule.

Missouri, which had six scoring drives of at least 75 yards, took a 45-41 lead with five minutes left in the fourth quarter and made a goal-line stand with seconds left to pull off the upset as roughly two-touchdown underdogs.

Less dangerous on offense and a disaster on defense, the 1-2 Tigers still face a murderer’s row of SEC competition: Florida next week, Auburn on Halloween, and Alabama and Texas A&M in November.

The season already seems lost. How much worse can it get? 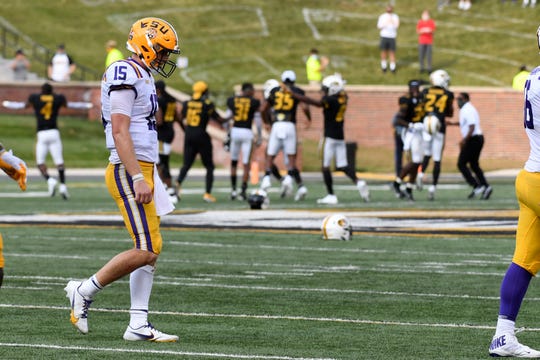 LSU quarterback Myles Brennan heads off the field as Mssouri players celebrate in the final seconds of their game at Faurot Field. (Photo: L.G. Patterson, AP)

It probably can’t get any more catastrophic on defense. Then again …

In his first season back as the Tigers’ coordinator, former Nebraska and Youngstown State coach Bo Pelini has crafted a scheme that allowed Mississippi State to crank out 623 passing yards and Missouri to gain 586 yards of total offense. In his first career start, Missouri freshman quarterback Connor Bazelak completed 29 of 34 attempts for 406 yards and four touchdowns.

Up next, LSU takes on Kyle Trask and the Florida offense, which is averaging more than 450 yards and 40 points per game.

Tuesday marks nine months to the day of LSU beating Clemson to close out an unbeaten season. The offseason losses were severe, from quarterback Joe Burrow through both coordinators through a series of key contributors at receiver, the offensive line and on each level of the defense.

That doesn’t excuse how bad LSU has been through three games. The defending national champions are the biggest disappointment in the Bowl Subdivision — and it may get worse in the next two months.

First-year coach Eli Drinkwitz pulls down his first win and potentially alters the course of Missouri’s season, which before Saturday seemed destined to end near the bottom of the East division. Clearly, the Tigers have found a quarterback in Bazelak, who should be the starter from this point. There is an aspect of the win that speaks to LSU’s mediocrity, of course, but Missouri has several winnable games ahead and can finish the year with four or five wins; that would make Drinkwitz’s debut a success.

Coming one week after a humbling loss to Alabama, Texas A&M’s 41-38 win against Florida restores faith in third-year coach Jimbo Fisher and breathes life back into the Aggies’ season. The nature of the win might tell you something about this team: A&M was down 28-17 and seemed in danger of seeing the Gators pull away before pulling even and then ahead with a field goal as time expired. Senior quarterback Kellen Mond had one of the best games of his career with 338 yards and three touchdowns without an interception.

A complete performance still eludes UNC, which dominated the first half against Virginia Tech, allowed the Hokies to pull within a touchdown during a 23-point third quarter and then reasserted control in the fourth to win 56-45. When in rhythm, the Tar Heels are tough to handle. (The issues arise during the other moments.) Ahead 42-37 entering the fourth, UNC scored on successive drives to put the game away and hand Virginia Tech its first loss.

Good news first: OU beat rival Texas 53-45 in four overtimes to win this year’s Red River Showdown and end a two-game losing streak. The maligned OU defense rebounded to hold the Longhorns to 4.9 yards per play. Young quarterback Spencer Rattler maintained his poise as the game moved into multiple overtimes. And the bad news? OU should’ve put this game away in regulation but coughed up a 14-point lead in the final minutes. Overall, it’s a win OU had to have but not one that sparks confidence in the Sooners’ chances at charging back into the Top 25.

The Cyclones have bounced back from a season-opening loss to Louisiana-Lafayette to take three straight in the Big 12, the latest a 31-15 win against Texas Tech. After narrow wins against TCU and Oklahoma, Iowa State was up 21-7 and in control at halftime. Given the uncertainty throughout the Big 12, the Cyclones have to be seen as one of the conference co-favorites.

Tennessee went into halftime with momentum after a late stand near its goal line preserved a 21-17 lead. But Georgia pulverized the Volunteers in the second half to win 44-21 and remain unbeaten heading into next weekend’s game against Alabama. There’s nothing particularly pretty about the Bulldogs’ style of play, which leans more toward the SEC style of the early 2010s than the more wide-open approach in vogue throughout the conference. It works: Georgia steadily forced Tennessee into mistakes while dominating the line of scrimmage. Is this style good enough to beat the Crimson Tide? We’re going to find out.

BULLDOGS ROLL ON: No. 3 Georgia handles No. 12 Tennessee

Like Iowa State, the Wildcats have gone from the low point of losing to a Sun Belt team (Arkansas State) to the high of winning three in a row in Big 12 play. The 21-14 win against TCU came with senior quarterback Skylar Thompson sidelined. His replacement, freshman Will Oliver, led the Wildcats with 86 rushing yards. Instead of Texas and OU, the Big 12 might come down to the result of Kansas State and Iowa State on Nov. 21.

The Tigers beat Miami 42-17 and gifted the Hurricanes a touchdown to end the first half due to an odd choice by Dabo Swinney: to attempt a 61-yard field goal as time expired instead of allowing Trevor Lawrence to throw into the end zone. Miami blocked the kick and ran it back to make it 21-10 at the half. But that was it for the Hurricanes, who are clearly not in Clemson’s class. But who is? The Tigers have room for improvement but look unbeatable in the ACC.

The loss to A&M chews up the Gators’ wiggle room but doesn’t necessarily change the path to the playoff: Florida still needs to beat Georgia, win the East and then claim the SEC championship to ensure a place in the semifinals. Not that any team with these issues on defense has a real shot at the national title. While the offense is humming behind quarterback Kyle Trask, the Gators have allowed at least 35 points twice through three games.

Hey, it could be worse. LSU has officially bottomed out under Pelini, who helped LSU claim the national championship while in the same position under Les Miles in 2007 but has struggled orchestrating a unit capable of stopping Mississippi State and Missouri. That bodes poorly for the performance of this defense against the best teams in the SEC. After allowing 3,341 passing yards and 20 touchdowns in 15 games last season, the Tigers have already given up 1,142 yards and 10 scores through the air.

Texas has lost five of six against Oklahoma. The Longhorns have allowed at least 33 points in each of their three games against Big 12 competition. UT is 4-6 in its last 10 against the Big 12. Fourth-year coach Tom Herman falls to 27-17 overall and 18-12 in conference play. It’s not a pretty picture.

Remember when Mississippi State was set to take college football by storm after beating LSU in its opener? A few things have changed since then. Just as LSU’s defense has been exposed, Mike Leach’s pass-happy offensive scheme has flopped in losses to Arkansas and Kentucky. The Wildcats held the Bulldogs to 275 passing yards on 70 attempts and made six interceptions to win 24-2.

Any questions about whether Mac Jones could lead the Crimson Tide offense are officially put to rest after he threw for another 417 yards with two touchdowns and just four incompletions in a 63-48 win against Ole Miss. But there are renewed concerns over the Alabama defense, which allowed the Rebels to gain 278 yards on the ground and 658 yards overall. Has the Ole Miss offense blossomed under Lane Kiffin? Yeah, and quickly. But churning out that amount of yardage in chunks raises questions about whether Alabama can handle up-tempo schemes.

The Panthers have gone from 3-0 to 3-2 after back-to-back one-point losses. After last week’s 30-29 loss to N.C. State, Pitt lost 31-30 in overtime to Boston College after missing an extra point. Life on the bandwagon was never going to be easy. With Miami and Notre Dame up next, these close losses might signal the beginning of the end for the Panthers’ hopes of an above-average season. Virginia Tech and Clemson are looming in November.