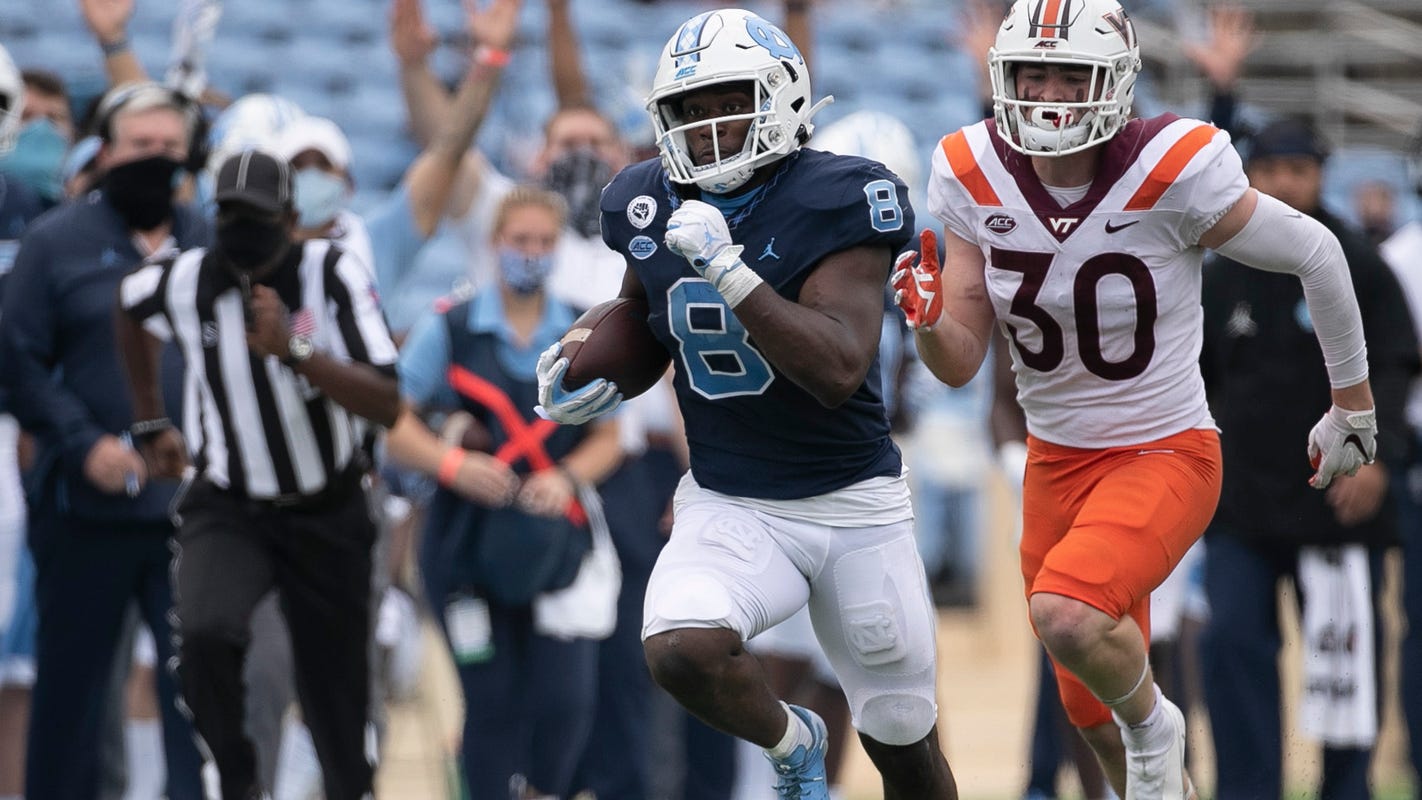 Top 10 performers in games from Week 6

Week 6 of college football was not kind to defenses across the board. Running backs and wideouts reigned supreme and left countless defenders heartbroken on the way to end zones across the country in high-scoring shootouts.

Quarterbacks enjoyed comfortable pockets and propelled their teams to wins with both their arms and their legs. And of course, some of these players played the hero role as their underdog teams came out on top against some touted opponents.

Ranking the top 10 performances from Week 6:

1. Terrace Marshall Jr., LSU, WR: Marshall was electric in LSU’s 45-41 loss to Missouri. He racked up 11 receptions for 235 yards and three touchdowns in the losing effort, including a 75-yard deep ball through the heart of the Tigers secondary.

2. Michael Carter, North Carolina, RB: The Tar Heels called their tailback’s number throughout their 56-45 win against Virginia Tech and the senior answered every time. Carter had 214 yards on 17 carries and two touchdowns in the high-scoring affair.

3. Sam Ehlinger, Texas QB: The Texas signal caller led the Longhorns through the air and on the ground in a four-overtime thriller against Big 12 rival Oklahoma. Ehlinger threw for 287 yards, rushed for 112 and had a total of six touchdowns in the latest iteration of the Red River Showdown. His efforts were in vain, however. The Sooners won 53-45.

FALLING SHORT: Sam Ehlinger heroics can’t do enough to save No. 22 Texas

HIGHS AND LOWS: Winners and losers from Week 6 include Texas A&M, LSU

4. Kevin Harris, South Carolina RB:  Harris had 200 all-purpose yards in the Gamecocks 41-7 blowout win over Vanderbilt. With 171 yards on the ground and 29 yards receiving, Harris’ two touchdown performance was a special one.

6. Connor Bazelak, Missouri QB: Bazelak led the charge for Missouri in its upset win over No. 16 LSU. He completed 29 of 34 passes for 406 yards, four touchdowns in the 45-41 home victory against the defending national champions.

SEC STUNNER: No. 16 LSU falls to winless Missouri in 45-41 shootout

7. Myles Brennan, LSU QB: Although LSU lost to an underdog Mizzou squad, it wasn’t for Brennan’s lack of performance from under center. The shredded the Missouri defense in the losing effort and threw for 430 yards and four touchdowns.

8. Macon Clark, Tulane DB:  Clark performed valiantly in Tulane’s 49-31 loss to Houston. Even though the opposition nearly scored 50 points, Clark was the one positive in the secondary with four tackles and two interceptions — one of which was a pick six.

10. T.J. Pledger, Oklahoma RB: Pledger was huge for the Sooners in their four-overtime win over Texas. He had 131 rushing yards and two touchdowns off of 22 carries and tacked on 24 receiving yards for Oklahoma.