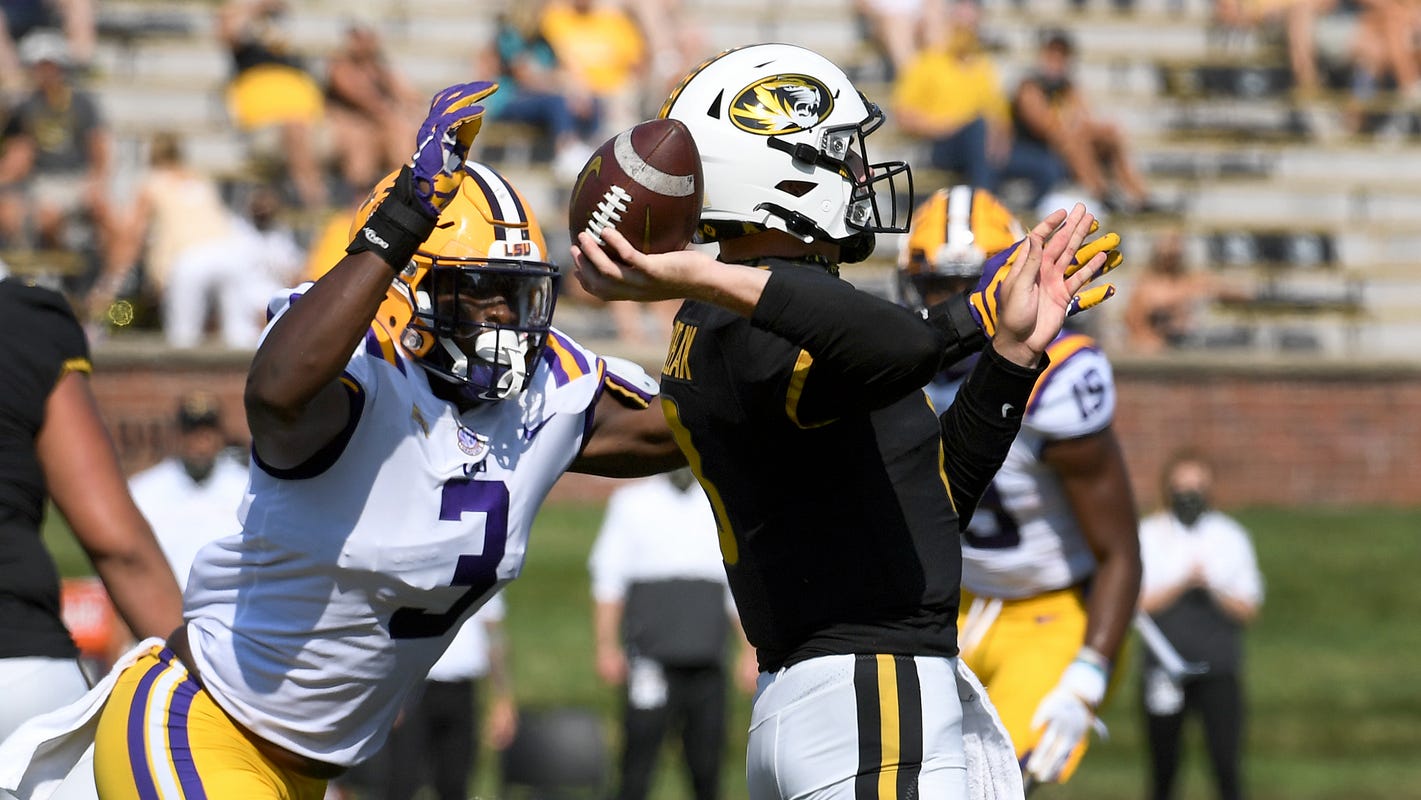 Missouri (1-2), which was blown out by Alabama and Tennessee to start the season, put up 586 yards. Redshirt freshman quarterback Connor Bazelak — in the first start of his career — shredded LSU’s secondary with 29 completions in 34 attempts for 406 yards and four touchdowns.

The game originally was scheduled to be at LSU, but was moved earlier this week because of Hurricane Delta.

Missouri took a 45-41 lead with 5:18 to play in the game on a 6-yard touchdown pass from Bazelak to tight end Niko Hea to complete a drive of least resistance against LSU’s defense – 77 yards in only four plays.

This came just after LSU’s Cade York’s 44-yard field goal was blocked with 7:04 to play.

LSU had a chance to win the game in the final seconds as quarterback Myles Brennan drove the Tigers to a first and goal at the Missouri 1-yard line with 44 seconds to play. Two runs up the middle by tailback Tyrion Davis-Price netted nothing. Then Brennan had two passes knocked away, and Missouri ran out the final few seconds for the win.

“We’ve got to get it in there,” LSU coach Ed Orgeron said. “We ought to be able to run the ball. We’re LSU. We should be able to score from the 1-yard line.”

Brennan completed 29 of 48 passes for 430 yards and four touchdowns.

Three takeaways from the loss:

LSU has no defense

LSU could not stop the Missouri offense. It looked like the Mississippi State game all over again in week one’s 44-34 loss to the Bulldogs – only the middle of the field was filled with even more wide-open spaces.

The Tigers allowed a Southeastern Conference record 623 yards passing in that game to graduate transfer K.J. Costello. And Bazelak at times looked like Costello.

Bazelak had completed 23 of 27 passes for 305 yards and three touchdowns through just three quarters. LSU’s Brennan was right there with him, completing 19 of 33 for 321 yards and four touchdowns as the Tigers led 41-38 on a 51-yard field goal by Cade York as the third period expired.

Without three lost fumbles by Missouri that turned into 17 LSU points, Missouri could have won in a rout. Missouri was also playing without several players because of COVID-19 positive tests, including starting wide receivers Damon Hazelton and Keki Chism.

With the score tied 14-14 early in the second quarter, Missouri returner Kris Abrams-Draine fumbled a punt after a hit by LSU’s Racey McMath. Damone Clark recovered for LSU at the Missouri 25.

One play later, Brennan found tight end Arik Gilbert for a 25-yard touchdown pass, giving LSU a 21-14 lead with 14:41 to go before halftime.

On Missouri’s next possession, LSU freshman defensive end B.J. Ojulari sacked Bazelak, who fumbled into the arms of defensive end Ali Gaye at the Missouri 31-yard line. Four plays later, York booted a 42-yard field goal for a 24-14 lead with 11:16 left in the second quarter.

Missouri closed the first half with 10 straight points on a 16-yard run by wide receiver Jalen Knox and a 52-yard field goal by Harrison Mevis for a 24-24 tie.

Missouri also ran freely on LSU’s defense as tailback Tyler Badie scored on a 29-yard run to tie the game at 14-14 with 22 seconds left in the first quarter.

Missouri closed the first half with 10 straight points on a 16-yard run by wide receiver Jalen Knox and a 52-yard field goal by Harrison Mevis.

Where does LSU go from here?

To Florida, which lost to Texas A&M, 41-38, on Saturday. Gators’ quarterback Kyle Trask, though, completed 23 of 32 passes for 312 yards and four touchdowns.

“You know,” Orgeron said, “we’re going to be playing some better teams.”