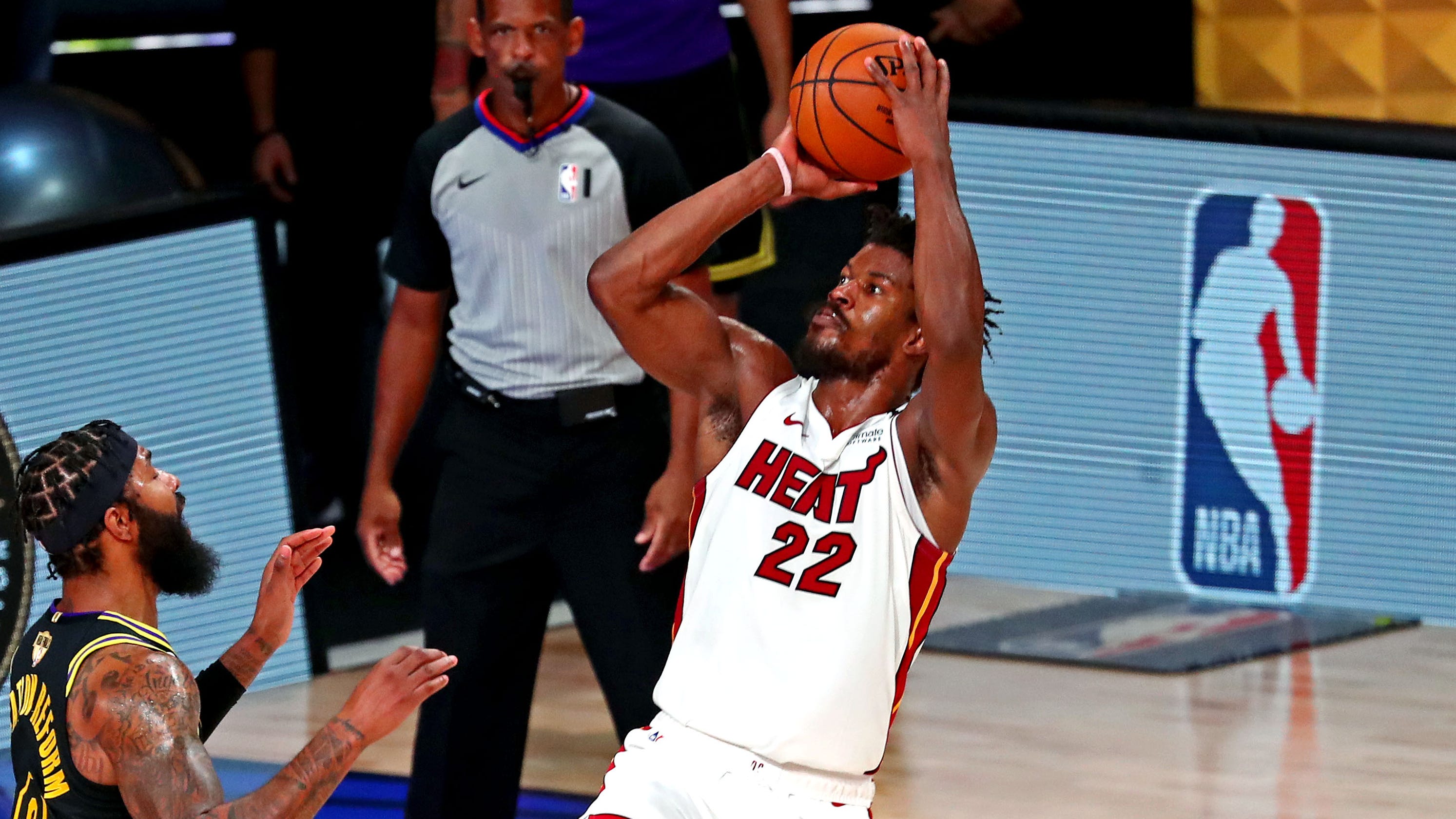 SportsPulse: Mackenzie Salmon breaks down what was easily the most entertaining game of this NBA Finals, which saw Jimmy Butler and the Heat out-duel the Lakers and force a Game 6.

After nearly 93 days on the NBA’s campus at Disney World, what’s a few more at this point?

Butler once again delivered a sensational performance — another triple-double — as the Heat defeated the Los Angeles Lakers 111-108 in Game 5 on Friday, keeping their season alive for at least one more game.

Butler’s two free throws with 16.8 seconds left in the fourth quarter put the Heat ahead 109-108. A wide open 3-point attempt by Los Angeles’ Danny Green fell short with 7.1 seconds left, and Markieff Morris committed a turnover with 2.2 seconds to go. Miami’s Tyler Herro made free throws, and a failed 3-point attempt by LeBron James at the buzzer resulted in a Heat victory.

Jimmy Butler and the Heat are still alive after an intense Game 5. Can they keep the momentum going Sunday and force a Game 7?

“It was a hard-fought game, think it’s going to be even harder for us next game … but I like our chances,” Jimmy Buckets said. pic.twitter.com/Gfiu8NvU4a

“We are here competing for a title, and that’s the most important story line, and it’s going to take everything we have,” Heat coach Erik Spoelstra said. “But this is everything that our guys in our locker room wanted. It’s this kind of competition between four lines, two baskets. You can’t write or print out the winner on this one. This one has to be earned between those four lines and that’s where our guys thrive.”

“We’ll definitely bounce back,” Lakers coach Frank Vogel said. “There’s no question about that. It’s a tough loss. There’s no doubt about it. We were very close.”

Almost duplicating his 40-point triple-double from Game 3, Butler had 35 points, 12 rebounds and 11 assists — 22 points, six rebounds and six assists coming in the first half. He also added five steals.

The Heat were fantastic on 3-pointers (42.4%), and they came from players who had struggled in the Finals. Duncan Robinson entered the game shooting 30.8% on 3s, but he shot 7-for-13 in Game 5 and had 26 points. Kendrick Nunn, who was 2-for-11 in Game 4, pitched in 14 points off the bench, and all five Heat starters were in double figures.

The @MiamiHEAT force a Game 6 behind Jimmy Butler’s 35-point triple-double in the Game 5 win! #NBAFinals

It was an impressive win, considering the Heat are without starting guard Goran Dragic, who has a torn plantar fascia in his left foot.

James and Butler put on a show.

In the first half, James had 21 points on 9-of-11 shooting and kept the Lakers close with 3-pointers. Late in the second half, he went to his power game, driving for a his three-point play with 1:34 remaining to put the Lakers up 104-103. His putback after an offensive rebound gave the Lakers a 106-105 lead with 46.7 seconds to go.

The Heat won the game at the free throw line. They didn’t miss in seven attempts in the fourth quarter and were 21-for-22 for the game.

The Lakers were unhappy with officiating in the final minute.

“I felt two bad calls at the end put Butler to the line, you know, and that’s unfortunate in a game of this magnitude,” Vogel said. “Anthony Davis has a perfect verticality, should be a play on. And the time before that, Markieff Morris has his hands on the ball, that should be a play on. They were given four free throws and made it an uphill battle for us. Very disappointed in that aspect of the game, but our group’s fine.”

James finished with 40 points, 13 rebounds and seven assists, and Anthony Davis had 28 points and 12 rebounds despite aggravating a right heel contusion that bothered him throughout the game.

It was just James’ second loss in a closeout game in the past 18 games.

“You stay in the moment, which I am, and understanding that we can be better,” James said. “And how we make the adjustments and how we learn from tonight, tomorrow in our film session and when we get together and prepare ourselves for Sunday, will show the difference.”