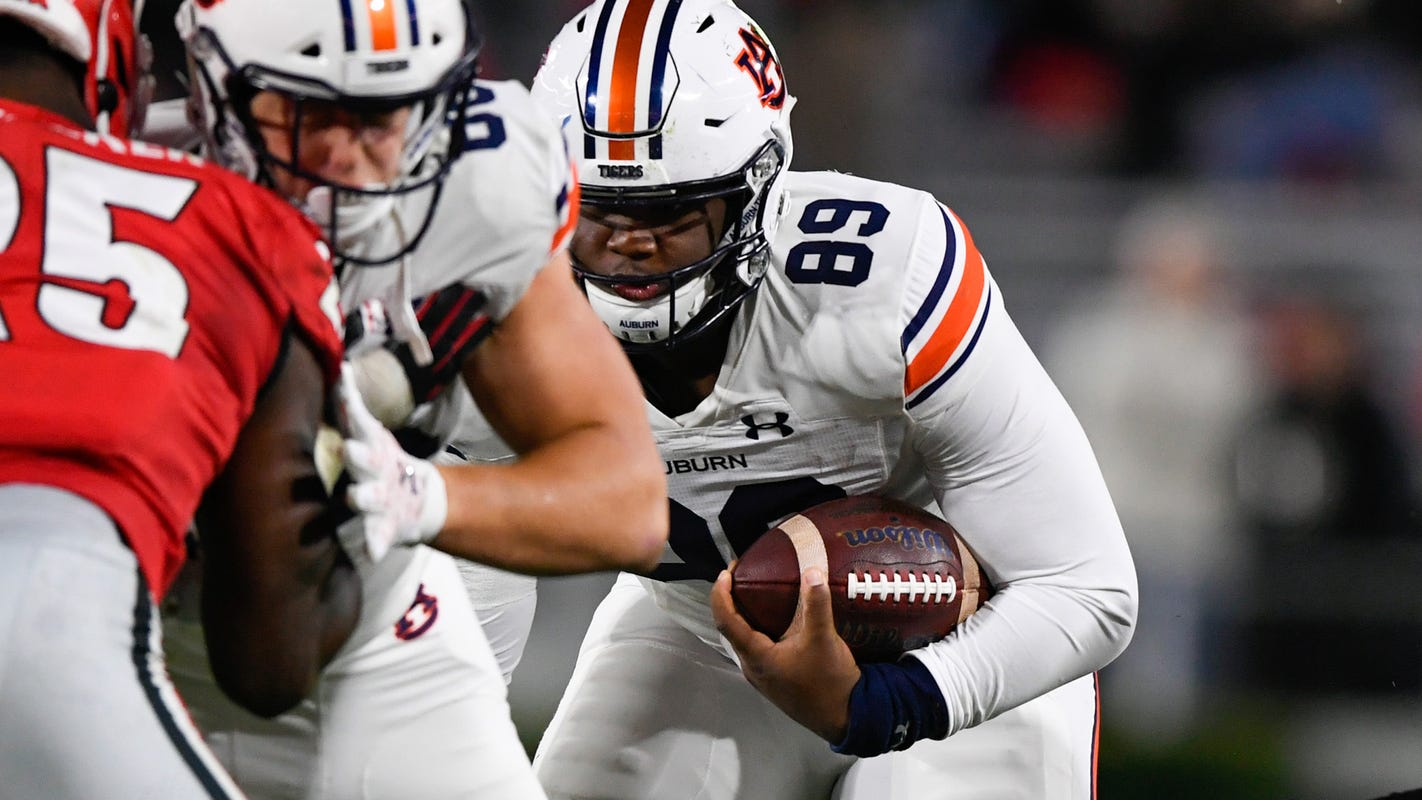 The situation Saturday was unremarkable. Auburn, trailing by three touchdowns at Georgia, ran the Wildcat on fourth and 1 from the Georgia 40-yard line — but the player running it was anything but.

It wasn’t a 200-pound running back handling the snap like it has been the past few seasons — it was 6-foot-2, 300-pound tight end J.J. Pegues. Georgia had stymied the Tigers’ rushing attack most of the night, but there was little its elite defense could do to prevent the big true freshman from barreling forward for the yard he needed.

Pegues has never been a lineman, save for in a few short-yardage situations on defense. He’s always been a skill player. He is the same height as starting Auburn defensive tackle Tyrone Truesdell. He’s 50 pounds heavier than senior defensive end Big Kat Bryant.

He just doesn’t move like it. Pegues played basketball in high school, but he wasn’t a power forward banging around in the post; he was a gigantic guard with great ball-handling skills and a sweet three-point stroke who played on the perimeter.

“He’s a different breed, for sure,” Auburn tight end John Samuel Shenker said. “When he came in, everybody said, ‘Oh gosh, he’s got to lose weight, he’s got to do this to play.’

“But I mean, it’s not a loose 300 pounds. It’s a solid 300. He’s super-athletic. He runs routes just like everybody else. It looks natural.”

Pegues’ listed position in high school was tight end, like it is at Auburn. But the “four-star athlete” label he garnered as a recruit is probably a more apt description of his role.

His high school football coach, Chris Cutcliffe, said Pegues played just about everywhere on offense – in-line tight end with his hand in the dirt, receiver split out wide, running back and, of course, Wildcat quarterback. He even played some regular quarterback, completing three passes for touchdowns during his career.

He finished his senior season with 623 rushing yards, 607 receiving yards and 18 scores.

Pegues, the No. 226 overall recruit in the 2020 class, garnered six SEC offers. He chose Auburn over other finalists Alabama and Ole Miss because he could envision how his versatility would fit in the offense.

He has only one catch for four yards and two Wildcat carries for four more through two games, with all of that production coming against Georgia. But it’s evident that he’s capable of much more. Pegues looked like a bulldozer running down the field to block on two Anthony Schwartz screens against Kentucky, one of which nearly made it into the end zone.

He caught his first college pass early in the second quarter Saturday on what looked like a delayed underneath screen. He converted third and 1 on a Wildcat carry three plays after converting the fourth and 1. On the very next play, he motioned out wide and ran a wheel route, but quarterback Bo Nix’s pass bounced just off his outstretched hands.

“It wouldn’t have surprised me one bit if he had caught it laying out like that. I’ve seen him do it 100 times,” Cutcliffe said. “I think he’ll catch it the next time.”

All of that came in an offense that awarded just three touches to tight ends in 13 games last season. Coach Gus Malzahn said “you’ll see more and more of that,” going forward, too.