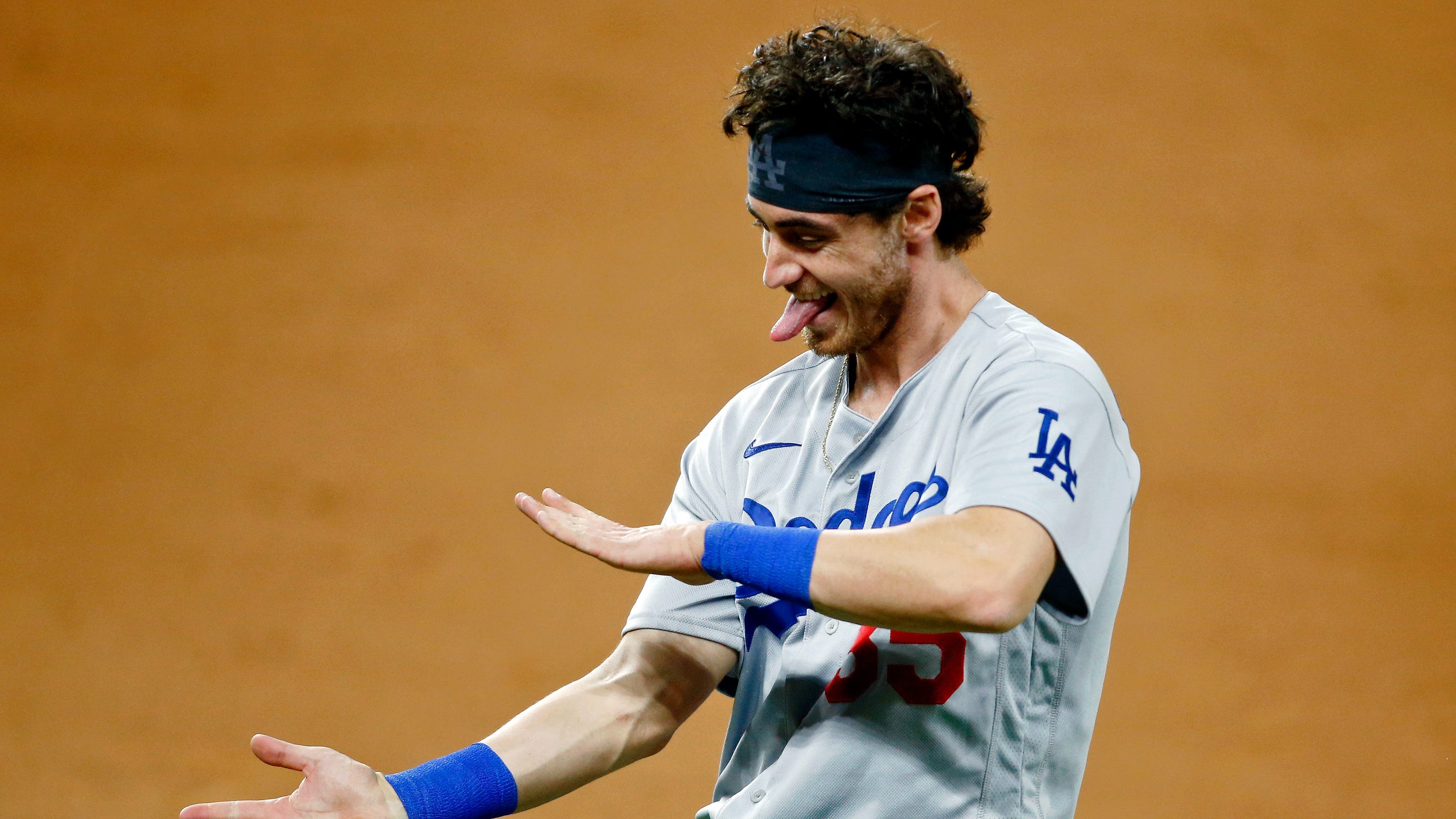 Perhaps the Los Angeles Dodgers have finally built a team that makes them invulnerable to their most recurring October ghosts.

Through two rounds of Major League Baseball’s postseason tournament, no one’s been able to touch them.

The Dodgers finished off an uneven and briefly pulsating three-game sweep of the San Diego Padres in the National League Division Series, banging out 14 hits to record a 12-3 victory at Globe Life Park in Arlington, Texas.

They may be staying a while.

The NL Championship Series and World Series will be contested at the monstrous new ballpark, and Monday, the Atlanta Braves will join them for Game 1 of the NLCS. The Braves will offer challenges that the Padres and Milwaukee Brewers – who bowed out in two games in the wild-card series — could not.

Deep and dominant starting pitching. A suffocating lineup 1 through 9. And a veteran bullpen that’s been nearly perfect so far in these playoffs.

Cody Bellinger and the Dodgers beat the Padres in Game 3 of the NLDS. (Photo: Tim Heitman, USA TODAY Sports)

Yet while the Dodgers have neutralized, not necessarily dominated, their postseason opposition, it’s clear this team is well-constructed, and able to overcome old demons.

And, says manager Dave Roberts, the best squad of his five years helming the Dodgers.

“It is,” Roberts said. “In the first two series, you saw what we’re capable of controlling the strike zone. It’s a credit to the hitting guys and the players to understand that value.

“It’s a mental thing. It’s a buy-in. This is the postseason. It’s about winning 90 feet. Taking what the pitcher gives you. Creating stress. That’s what we’ve done all throughout the lineup.”

In the NLDS, the Dodgers saw Clayton Kershaw wobbled, but not toppled. They saw Kenley Jansen wither on the mound in a ninth inning — yet had the wherewithal to bail him out.

And in Thursday’s Game 3, Roberts and his overly creative front-office friends fiddled with the pitching plan and handed an early lead to the Padres.

But still, the eight-time NL West champs couldn’t be suppressed.

NLCS:Braves finish off sweep of Marlins

Perhaps it’s Mookie Betts, whose veteran presence and elite skills — he reached base five times and scored four runs in the three games — taking the pressure off the hitters that follow. Maybe it’s the 100-mph heat of rookies like Dustin May – who opened Game 3 — and Brusdar Graterol that helps curb October randomness.

Lest we forget, Will Smith banged out five hits in Game 3, a franchise playoff record and also a first for any catcher in a postseason game.

Above all, it’s the totality of the lineup and the 28-man roster that sets them apart. The club has not yet pulled the seal off rookie right-hander Tony Gonsolin, who struck out 46 batters in 46 ⅔ innings this season. When we next see May, he’ll probably be starting one of the NLCS games in a format where there are no off days and four or five bona fide starters would be preferable.

So the Dodgers will roll out stalwarts Walker Buehler and Kershaw and the rookies, and slot in Julio Urias wherever they see fit — he retired the first 10 Padres he faced in Game 3 to tilt the outcome L.A.’s way — and have at the Braves. A third trip to the World Series in four years is in the offing.

And for a club seeking its first championship since 1988, five wonderfully unremarkable and victorious games did plenty to suggest this trip would end with a better outcome.