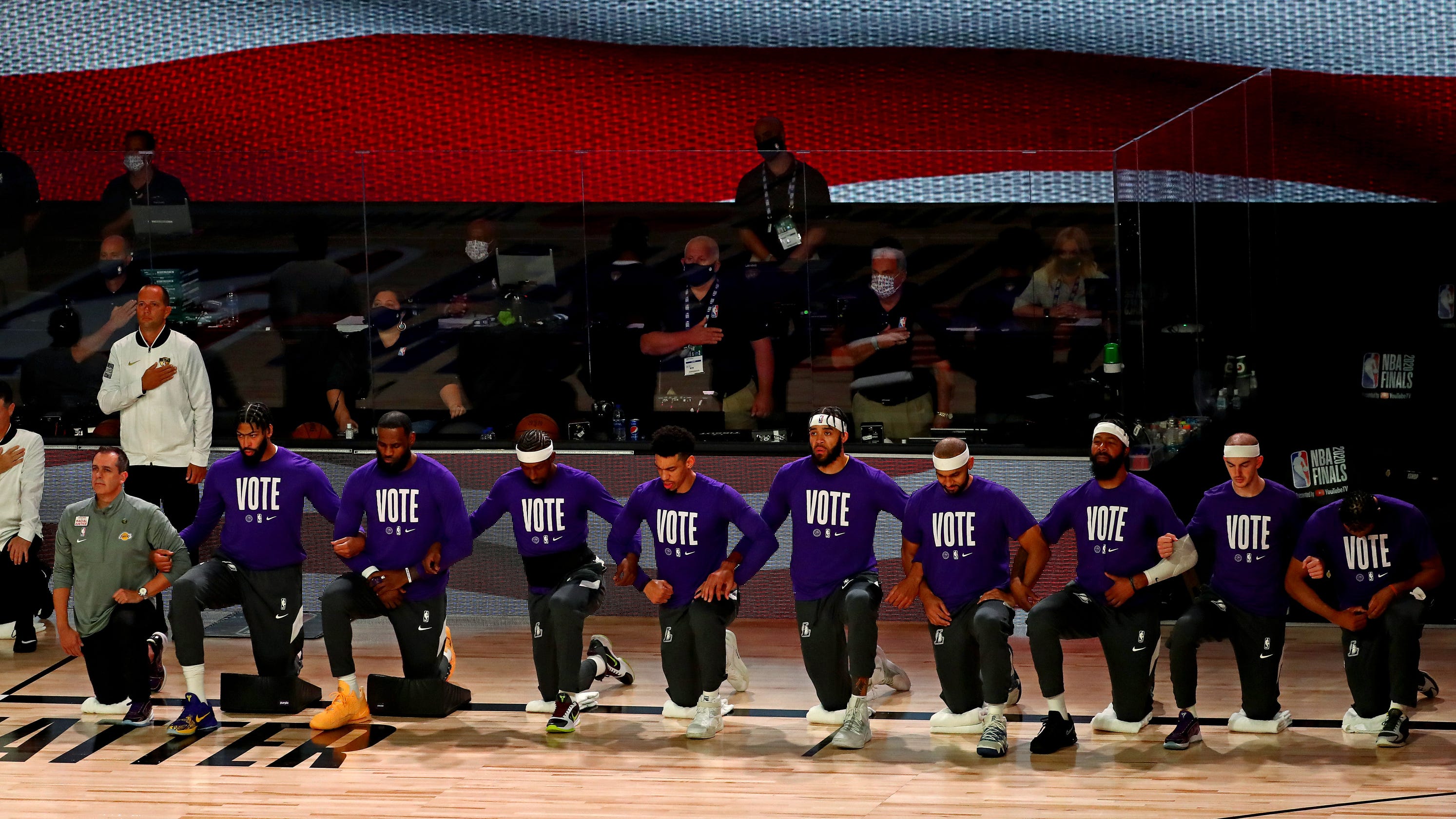 Why TV ratings for sports have been down since returning

When we were smack in the middle of the barren sports landscape of April and May, it seemed natural to assume that the hunger to watch big events would build to a crescendo when they finally came back. With no options other than classic games or documentaries, the only salvation was the promise of a fall cornucopia to give us our sports fix and then some.

But the idea that sports coming back would automatically bring fans to their televisions in huge numbers has turned out to be inaccurate. In fact, it would be completely fair to say that the viewership for sports has been a bit disappointing.

There are lots of theories about why that has been the case. But the one that makes the most sense?

TV viewership of the NBA Finals has been down, which some have tried to attribute to players protesting social injustice, but ratings in nearly every sports have also decreased. (Photo: Kim Klement, USA TODAY Sports)

It turns out, there might be too much sports to watch. And when you combine that with the lifestyle changes so many people have made during the COVID-19 pandemic, there is both an explanation for the drop in numbers and somewhat of a long-term warning for sports.

“Everyone is excited in the spring like, ‘Oh we’ll have this incredible fall with so much sports to watch,’” said Austin Karp, the managing editor/digital at Sports Business Journal who closely tracks ratings and the sports television industry. “But the problem is there is that tonnage. That’s why we spread this out over the course of the year. People are inundated with, ‘OK, I have football, do I really need to watch the NBA Finals? My mind is trained to watch that in June.”

The average fan should not care how many people are watching a particular game or sport. If you enjoy it, you should watch it. Generally speaking, television ratings are a niche topic that only matter inside the industry, and yet the coverage they receive in the news media often leads people to seize on them to further a particular narrative.

The most prominent example of that, of course, began in 2016 when right-wing political commentators tried to correlate Colin Kaepernick’s protest of police brutality and racial inequality during the national anthem with a drop in NFL ratings as a way to validate their criticism of him personally.

The same pattern has been repeated during the NBA’s restart with players highlighting social justice messages and the league’s embrace of the Black Lives Matter movement. Indeed, ratings for the bubble have been lackluster overall and viewership of the Finals thus far has been historically poor, with Game 1 registering 7.4 million viewers (lowest on record) and sinking to 5.9 million for Game 3.

But the theory that fans are turned off by “wokeness” doesn’t hold up when you consider the following:

In other words, the pattern is clear. And it should lead us to examine what’s really going on.

There are four factors contributing to that.

But there’s also an existential question that nobody really knows the answer to. Has the pandemic changed people’s behaviors and habits in a way that will be difficult for sports to recover from when life goes back to normal?

For millions of Americans, the routine of going to work, coming home, eating dinner and settling in on the couch to watch a game has not been part of their lives for seven months. They’ve been working from home, schooling their children at home, developing new hobbies to occupy their down time and watching television when it fits their schedule.

“This familiar, linear nature of our lives has been interrupted,” Deninger said. “In the first six months of 2020, Netflix added 5.2 million new homes subscribing in the United States and brought their total to almost 73 million. They don’t have any sports. Regardless of how your schedule has been upended, you can watch what you want when you want and escape into fiction.”

The number of so-called cord cutters getting larger is not a new story – and many of those viewers can stream live sports –but it’s one that has certainly been magnified by the pandemic. Whether those people and others come back to watching sports once this is all overis difficult to project, but it will have major implications on rights negotiations in the future, which directly impacts league revenues and player salaries.

“I’m almost giving a pass to everything going on right now,” he said. “I think people that are helping negotiate those deals are smart enough to know we just need to get games on TV right now and ratings be damned.

“When rights deals come up, the NFL and NBA are still going to get an increase. When you look at the top 100 programs, it’s all football, Olympics, World Series games, the Derby. There’s no ‘Big Bang Theory’ anymore that is going to crack that. ‘Cheers’ isn’t coming back. Those are shifted to Netflix or Amazon or one of the 10,000 things launching now.”