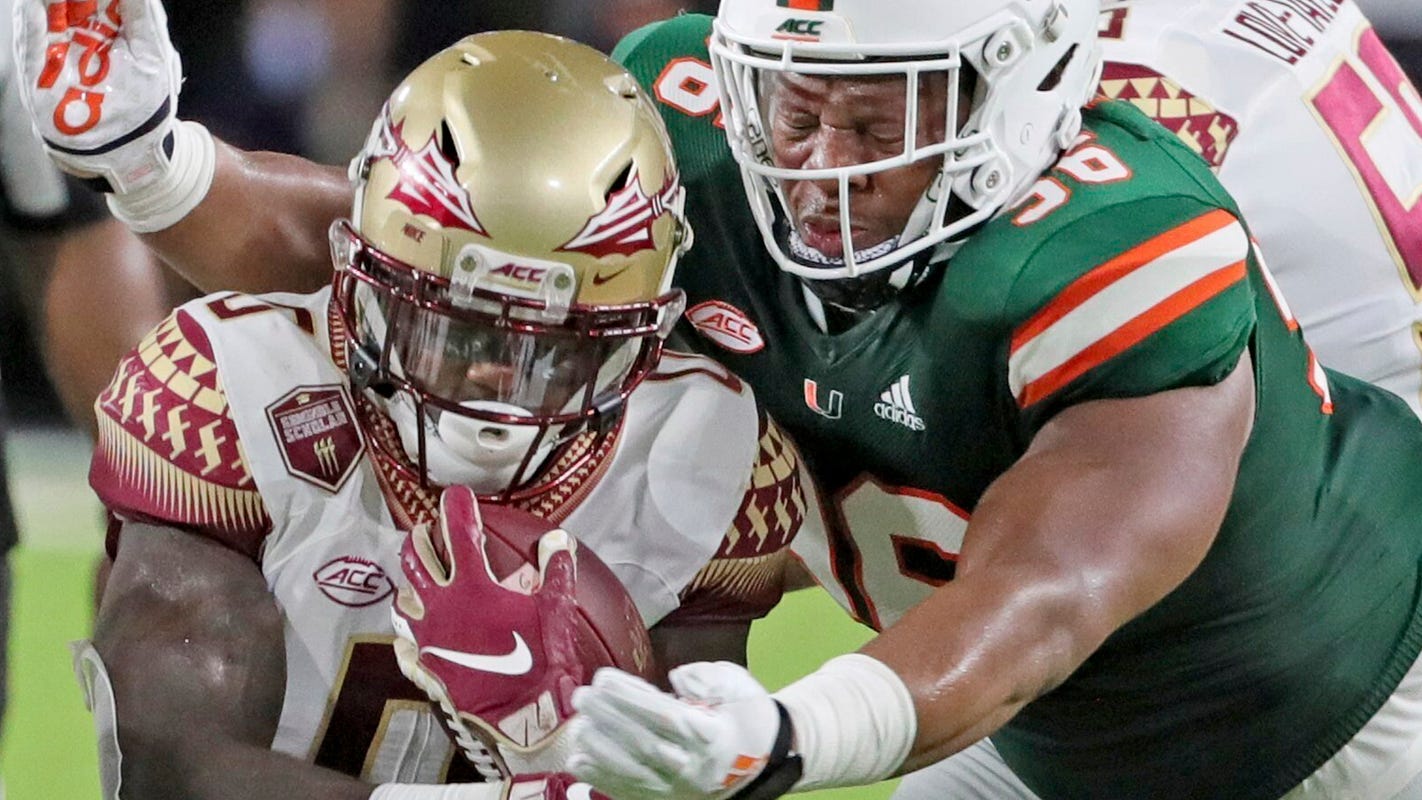 Six years ago this month, Florida State hosted unbeaten Notre Dame and stirred memories of 1993, a No. 1 vs. No. 2 pairing marketed in advance as the latest “Game of the Century” and won by the Fighting Irish.

Notre Dame carried the sort of prestige built over a century of prominence. But Florida State was the star at the center of the college football universe.

The defending national champions, then ranked second in the Amway Coaches Poll, hadn’t lost since Nov. 12, 2012 — a streak of 22 games.

The Seminoles were led by quarterback Jameis Winston, the reigning Heisman Trophy winner, and Jimbo Fisher, at that point the only coach mentioned in the same breath as Alabama’s Nick Saban. Eleven players would be selected in the 2015 NFL draft, including Winston at first overall, giving FSU 29 selections over a three-year span to set a new modern-era draft record. The program was outperforming the rest of the Bowl Subdivision.

Down 17-10 to the Irish after two quarters, the Seminoles would score three touchdowns in four drives to begin the second half and make a late goal-line stand to win 31-27. The winning streak grew to 23 games and would eventually balloon to 29, tied for the nation’s second-longest streak since 1972. The underlying theme was inevitability: FSU would find a way to win.

The Florida State of 2020 heads into Saturday’s game at Notre Dame (7:30 p.m. ET, NBC) bearing little resemblance to the program that seemed poised to battle Alabama as the dominant teams of the 2010s. After winning 10 or more games in five straight years with one championship and another College Football Playoff berth, the Seminoles are 19-22 since the start of the 2017 season and off the pace set by the top half of the ACC, let alone the best teams in the Bowl Subdivision.

Florida State and Jashaun Corbin lost to Miami 52-10 last month in a game that used to be one of the premier matchups of the season. (Photo: Al Diaz, AP)

To understand what single factor drove FSU off track is to miss the larger picture — no one single thing caused the Seminoles’ derailment but rather several factors occurring almost simultaneously. If handled appropriately, any one issue might have been survivable. Together, they combined to crumble a potential dynasty and turn FSU into something else altogether: a program in search of an identity.

“It’s never just one thing. You don’t go from being a dynasty or a perennial powerhouse to being as bad as Florida State is overnight, because of one issue,” said former Florida State quarterback Danny Kanell. “This is a culmination of a bunch of things that have come together.”

Foremost is coaching turnover and the resulting impact on recruiting, roster management and player development.

There have been three head coaches in four years: Fisher, who now holds the same position at Texas A&M, in 2017; his replacement, current Florida Atlantic coach Willie Taggart, for 2018 and the first nine games of last season; and now first-year coach Mike Norvell, who was hired from Memphis. Longtime assistant Odell Haggins served as the interim coach for the final two games of 2017 and the last four games of 2019.

This same span has seen four offensive and three defensive coordinators, in an ever-changing schematic approach that has negated any chance at continuity and forced the Seminoles into an annual offseason reboot.

Florida State’s recruiting blueprint has varied by staff. There was a heavy focus on South Florida during the program’s heyday under Fisher, when the Seminoles reeled in top-five recruiting classes in every year but one between 2011-16, per 247Sports.com. The search has broadened statewide and nationally across the past several years with a particular focus on transfers as a way to infuse the roster with depth and experience. Norvell added seven transfers during his first recruiting cycle alone.

“Their reputation has become negatively affected by not meeting the expectations of winning,” said Roger Harriott, the head coach at St. Thomas Aquinas High School in Fort Lauderdale, the No. 3 team in the USA TODAY Sports Super 25 rankings.

“Coach Norvell and his staff seem to be moving in the right logistical direction from a holistic standpoint. He inherited some obvious challenges but is handling it with a solution-oriented approach. They are doing a good job establishing a healthy relationship with us and offering support.”

Issues with talent evaluation and development that began during Fisher’s final year have snowballed amid the successive coaching changes.

No position groups illustrate these failures more than the offensive line and quarterback. Recruiting misses and attrition have turned the offensive front into an annual punchline. The Seminoles have used eight quarterbacks since Winston’s departure and failed to sign one non-transfer quarterback during Taggart’s two seasons, the latter part of a broader concern: Nearly half of the 2018 class is no longer with the program.

After starting James Blackman to begin the year and inserting freshman Tate Rodemaker in last week’s win against Jacksonville State, Norvell will start former Louisville transfer Jordan Travis against Notre Dame. Not since the end of the 2002 season had FSU started three different quarterbacks in three straight games.

In all, the inconsistent leadership at head coach and at quarterback has contributed to the fractured culture evident in the games that have gotten out of hand — after losing a combined 13 games across the previous six years, FSU has lost 13 games by 17 or more points since the start of the 2017 season.

Meanwhile, Clemson’s active dynasty has secured a place in college football history. Florida has returned to prominence under third-year coach Dan Mullen. As seen in the Hurricanes’ 52-10 win last month, Miami has left the Seminoles behind in leaping toward the top of the ACC. Ceding hard-earned ground to the Tigers, Gators and Hurricanes has only exacerbated the existing issues in recruiting.

The Norvell era begins against this backdrop. Respected among his peers as an offensive innovator after winning 38 games in four seasons at Memphis, the Seminoles’ first-year coach takes on lower expectations than his predecessor; FSU was picked to finish seventh in the ACC preseason poll. He also inherits more daunting gaps in personnel and a team even further removed from national contention.

“We have to continue to work and make that choice as a football team and as individuals on what that standard is going to be for each one of us,” said Norvell. “I can promise you, for the program, the standard will not change.”

The Seminoles’ struggles through three games and heavy-underdog status heading into Saturday night speak to the overall situation: For the first time since hiring Bobby Bowden from West Virginia in 1976, Florida State is embarking on a true rebuilding project. Can the program be rebuilt as quickly as it fell apart?

“I am confident we will regain our place among the nation’s elite programs,” said Florida State athletics director David Coburn. “We have everything we need to be successful — a national brand that’s second to none, top-20 institution academically, the most fertile recruiting area in the country and a tremendous young head coach and football staff.

“The elements we can control are in place now, and I think our climb back to the top is beginning.”