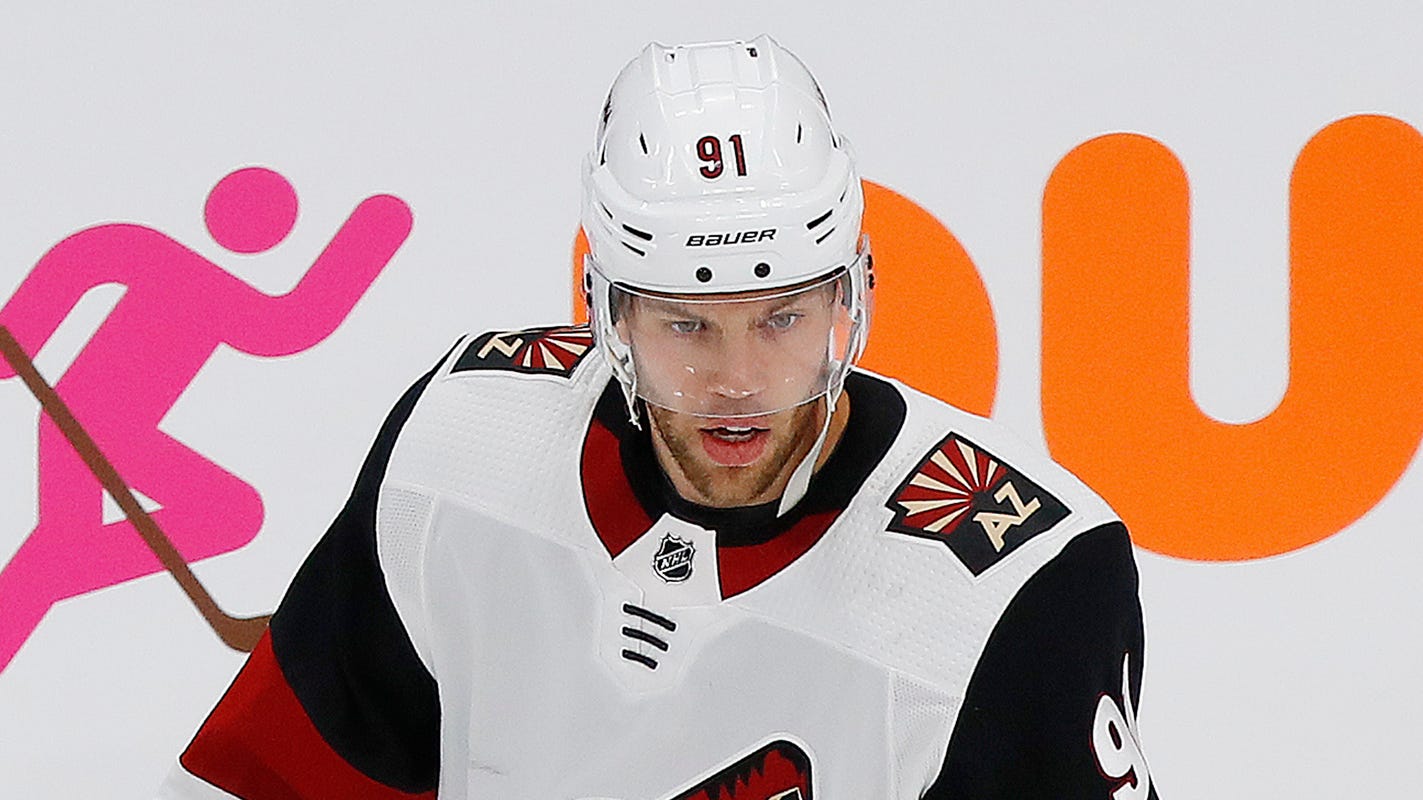 The usual July 1 opening of NHL free agency has turned to Oct. 9 due to the delay caused by the coronavirus pandemic.

Eleven days after the Tampa Bay Lightning won the Stanley Cup in the Edmonton, Alberta, bubble and two days after the conclusion of the NHL draft, general managers are hard at work again at improving their teams.

This offseason’s crop of free agents is a top-heavy one, including a No. 1 defenseman and several front-line wingers, mixed in with puck-moving defenseman and the standard depth forwards and defenseman. The major difference this year, though, is the number of goalies available. It will also be interesting to see how the pandemic affects prices given to these top free agents, with teams facing financial hardships and the ETA on next season’s start and fans in the stands being unclear.

1. Alex Pietrangelo, defenseman, St. Louis Blues: The only negative with signing Pietrangelo is that he is 31, meaning his best seasons are likely in the past and the contract might not age well. Other than that, Pietrangelo fills all of the boxes: He’s been the captain of a Stanley Cup winner and he’s a right-shot defenseman with size and plays in all situations. He had 16 goals and 52 points last season.

2. Taylor Hall, forward, Arizona Coyotes: A former No. 1 overall pick, he won the Hart Trophy in 2017-18 with a 93-point season. He hasn’t been able to match that, but his scoring ability will be coveted. Injuries have been a problem.

RECAP: Updates, analysis of news, rumors from Day 1 (first round) 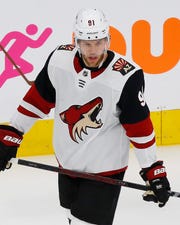 Winger Taylor Hall will be one of the most coveted free agents available. (Photo: Perry Nelson, USA TODAY Sports)

3. Mike Hoffman, forward, Florida Panthers: Hall will likely command the longer, larger contract as he is two years younger, but Hoffman is an acceptable 1B. His 29 goals and 59 points last year are tops among pending unrestricted free agents. Hoffman can be a high-end, first-line contributor.

4. Torey Krug, defenseman, Boston Bruins: He has exciting offensive skills and can quarterback a power play and bring the puck up ice. He also keeps opponents honest with the occasional big hit.

5. Tyson Barrie, defenseman, Toronto Maple Leafs: He has had three 50-point seasons and is strong on the power play. His production dropped off after the Avalanche dealt him to the Maple Leafs. He’s prone to giveaways.

6. Evgenii Dadonov, forward, Florida Panthers: Since Dadonov entered the NHL as a full-time player at 28, he has notched 81 goals and 182 points in 225 games. Now 31 and one of the premier offensive players on the market, he will command a heftier contract than the three-year, $12 million deal that just expired.

7. Sami Vatanen, defenseman, Carolina Hurricanes: Vatanen is 29, shoots right and does a lot of things acceptably, even if he’s not a star. He has logged more than 21 minutes per game over his career. Even if he fits in a second-pair role, he will likely popular.

8. Jacob Markstrom, goalie, Vancouver Canucks: Coming off his best season, he helped the Canucks end their postseason drought. He was strong in knocking off the defending champion St. Louis Blues in the first round, but Thatcher Demko appears ready to assume the lead role.

9. TJ Brodie, defenseman, Calgary Flames: Brodie doesn’t offer a lot of offensive upside (34 points in 2018-19 and 19 points last season), but he is a steady, veteran presence who could fit in on a second pairing. While he shoots left, he has experience on the right side and can log heavy minutes.

10. Braden Holtby, goalie, Washington Capitals: If Holtby were a free agent a few years ago and had his current credentials as a Stanley Cup winner and Vezina winner, he would get paid. But with an abundance of goalies on the market and Holtby’s play slipping — .907, .911, .897 save percentages over the past three years — he is not a lock to ink a huge long-term deal nor have a starting spot assured.

11. Anton Khudobin, goalie, Dallas Stars: The career backup thrived in a starting role when Ben Bishop was hurt during the playoffs, leading the Stars to the Stanley Cup Final. He had a .950 save percentage in the conference final against the Golden Knights.

12. Tyler Toffoli, forward, Vancouver Canucks: Toffoli is a bit of a hard read. He has flashed potential with 31 goals and 58 points in 2015-16, though he has never been able to replicate that production. He seemed to find chemistry with the Canucks after being acquired at the deadline, when he put up six goals and 10 points in 10 regular-season games. Even as a middle-six option, the 28-year-old should be an asset as he typically influences puck possession in a positive way.

13. Kevin Shattenkirk, defenseman, Tampa Bay Lightning: It wasn’t long ago when Shattenkirk was considered one of the best offensive blueliners. Now, at 31, he still provides offense, but he has lost speed and should not be relied on as a focal point of an offense. He can still help a power play, and is coming off a postseason in which he tallied 13 points in 25 games.

14. Mikael Granlund, forward, Nashville Predators: The trade to the Predators didn’t work for him, but he did have back-to-back 60-point seasons with the Wild. A team could be willing to take a chance that he regains that touch.

15. Alex Galchenyuk, Minnesota Wild: He is here because of his age and not because he has fulfilled his promise as a former third overall pick. Galchenyuk had 24 points in 59 games last season, but he won’t turn 27 until February and has a 30-goal season on his resume. Some team still will bet on his upside.

16. Erik Gustafsson, defenseman, Calgary Flames: The offensive potential is there. He scored 60 points two seasons ago. His defensive game can be an issue.

18. Christopher Tanev, defenseman, Vancouver Canucks: He doesn’t put up a lot of points (his 20 points last season tied his career high), but he is solid on the defensive side. He kills penalties and blocks shots.

19. Erik Haula, forward, Florida Panthers: He had 55 points with the Vegas Golden Knights in their inaugural season but was traded to the Carolina Hurricanes and Panthers in the past year.

20. Craig Smith, forward, Nashville Predators: Smith is not a high-upside option, but he is reliable and has played in 52 playoff games in his career. He has five 20-plus goal seasons and should be in line for 40 points.

21. Henrik Lundqvist, goalie, New York Rangers: After being bought out by the Rangers, the surefire Hall of Famer will only be looking for a short-term deal on a bargain contract. At 38, Lundqvist is not as his peak and can’t carry the bulk of starts, but should be able to find a job as teams rely more on timeshares in net.

22. Anthony Duclair, forward, Ottawa Senators: The speedy winger had a career-best 23 goals last season and was named to the All-Star Game. But he had only two goal after Christmas. Duclair had arbitration rights, and the Senators chose not to give him a qualifying offer.

23. Conor Sheary, forward, Pittsburgh Penguins: He has been a regular on Pittsburgh star Sidney Crosby’s line. His production dropped when he was traded to the Sabres, but the Penguins brought him back around the trade deadline.

24. Corey Crawford, goalie, Chicago Blackhawks: Blackhawks GM Stan Bowman said he was “optimistic” the team would keep Crawford, who has been with Chicago since being drafted in 2003. Crawford posted a .917 save percentage last season.

25. Bobby Ryan, forward, Ottawa Senators: The Masterton Trophy winner was bought out by the Senators. He got treatment for alcohol addiction and scored a hat trick in his first home game back. He had eight points in 24 games. The Flyers would be an ideal choice for the South Jersey native.