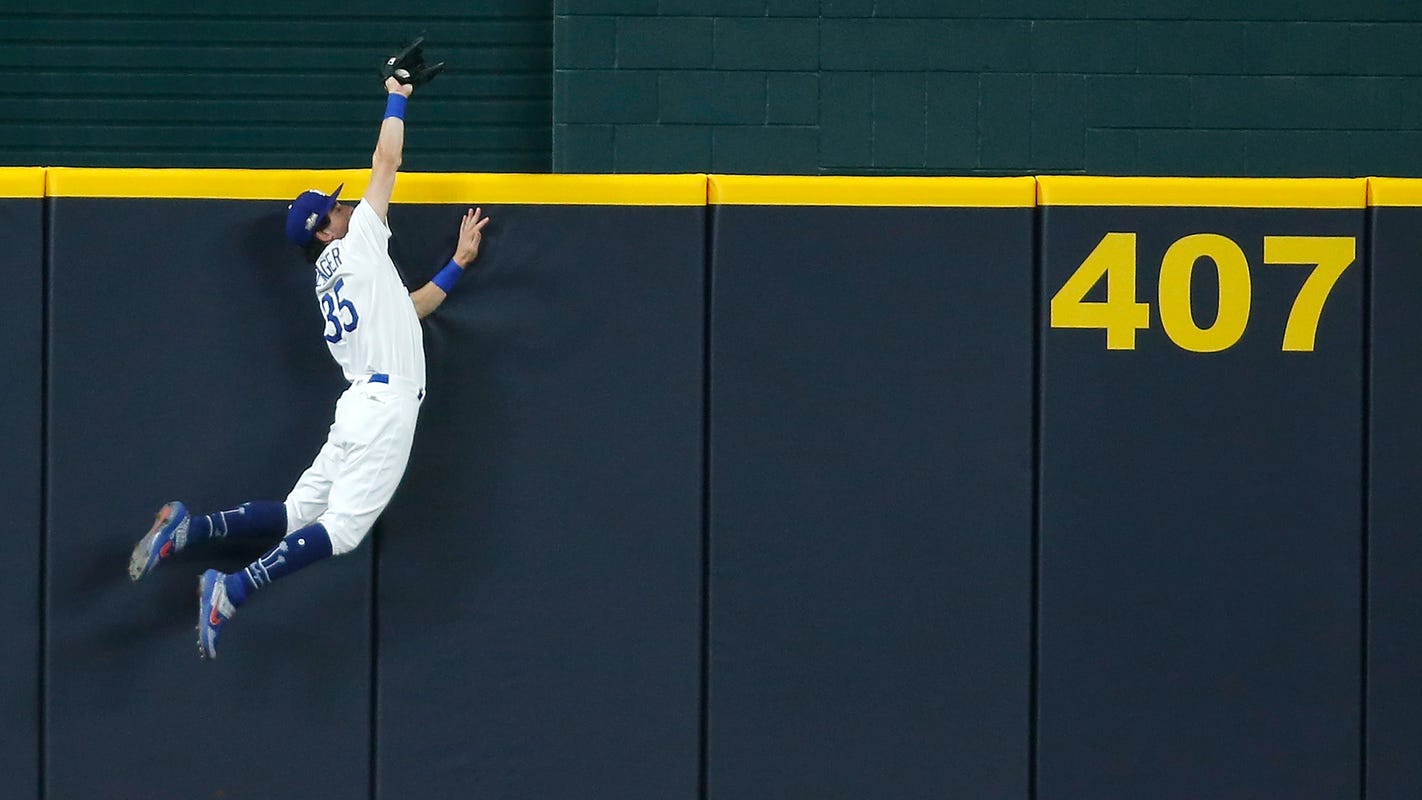 There are times, far too many times, when baseball’s staid past and actionless present dominate the proceedings, games stretching far into the night with precious few balls in play.

Then, there are moments like the one that unfolded in the seventh inning of Game 2 of the National League Division Series between the San Diego Padres and Los Angeles Dodgers, when raw athleticism and emotion converge in a manner never seen.

Put simply: A relief pitcher fired a 99-mph fastball that a shortstop hit 407 feet to dead center field, where a reigning MVP who just hit a home run crazy-legged his way to the wall, leaped and brought the ball back to save a two-run home run and, perhaps, his club’s World Series aspirations.

The reliever, relieved and humbled by his good fortune, removes his hat and tosses his glove and drops to his knees and prays to a higher power, and presumably the man who saved his livelihood this evening. Meanwhile, an opponent across the diamond – fresh off chucking a bat across the state of Texas after celebrating a home run – cusses out the reliever for his show of emotion, enraging guys he was teammates with just two years ago.

Welcome to Dodgers vs. Padres. May it never end.

Wednesday night at Globe Life Field, a sterile, neutral-site stadium serving as a playoff hub amid a pandemic, the Dodgers and Padres colored way out of the lines, a startling display of skill and emotion that ultimately resulted in a 6-5 Dodgers victory and a 2-0 lead in this best-of-five series.

“It’s going to take a while to wind down from that one,” said Cody Bellinger, the man gifted enough to hit a home run and rob another within the same game.

“That was playoff baseball.”

The Dodgers are a win away from their third NL Championship Series in four years, and the heavy favorites to win the World Series remain perfectly aligned to do so.

They were one swing away from it all going terribly awry.

They were nursing a 4-3 lead with one on and two out in the seventh when rookie reliever Brusdar Graterol was summoned to face the dynamic Fernando Tatis Jr. The second-year shortstop crushed that 99-mph sinker to dead center field, where reigning NL MVP Bellinger got turned around more than once as the ball sailed directly over his head.

He righted himself just in time, elevated and poked his glove over the 8-foot wall. It came back with a ball inside, Tatis robbed of another defining playoff moment, Graterol’s bacon saved.

The fun was just beginning.

Like a man seeing his good fortune restored before his eyes, Graterol lost it – his hat, his glove, his emotions. He fell to his knees in gratitude.

Manny Machado was not so appreciative.

The Padres’ $300 million third baseman, a Dodger for three months of a World Series run in 2018, cursed at Graterol repeatedly. Graterol waved at him.

Machado moved toward the middle of the diamond. And like old family business dredged up at the holidays, it got tense.

Dodgers first baseman Max Muncy stepped toward Machado and implored him to, in so many words, kindly return to his dugout. Enrique Hernandez jogged on by with a sheepish and knowing grin. New Dodger Mookie Betts, Machado and the Dodgers’ opponent in that 2018 World Series, waved for Machado to retreat.

It was a haze of emotion and hyper-competitiveness and even hypocrisy, given that Machado chucked his bat after a sixth-inning homer, shouting an impassioned “Let’s (expletive) go!” back at his dugout in this empty ballpark.

“I don’t know what Brusdar Graterol did,” says Bellinger, “but it’s a big play in a postseason game, so – I got Graterol’s back.”

Says Dodgers manager Dave Roberts: “We all know Brusdar’s very emotional and he was caught up in the moment and just celebrating Cody’s play. Manny took exception to it. but I think it’s over.”

In the end, it resulted in a Dodger win that nudged their traditional October issues – Clayton Kershaw’s just-OK performance and Kenley Jansen’s shaky ninth inning – to the back page.

The drama did not cease until the final pitch, as Jansen, in perhaps his last gasp as Dodgers closer, gave up three hits in five batters, trimming a 6-3 lead to 6-5. Joe Kelly was summoned and pitched very carefully around Machado and Tatis, loading the bases. Finally, Kelly got Eric Hosmer to roll a ground ball to second for the game’s final out.

And now, this Padres-Dodgers saga is officially on and popping, a drama that should endure.

Machado is signed through 2028, Betts through 2032. Bellinger will be around at least another four years.

They’ll meet 19 times a year, but in 2020, perhaps just once more, Thursday night in Texas.

That’s too bad. Because this was baseball like we’ve never seen, defined by bookend plays from one superstar in a game filled with them.

“People have asked me if I’d rather hit a home run or rob a home run,” says Bellinger. “In that circumstance? Robbing a home run felt pretty good.”