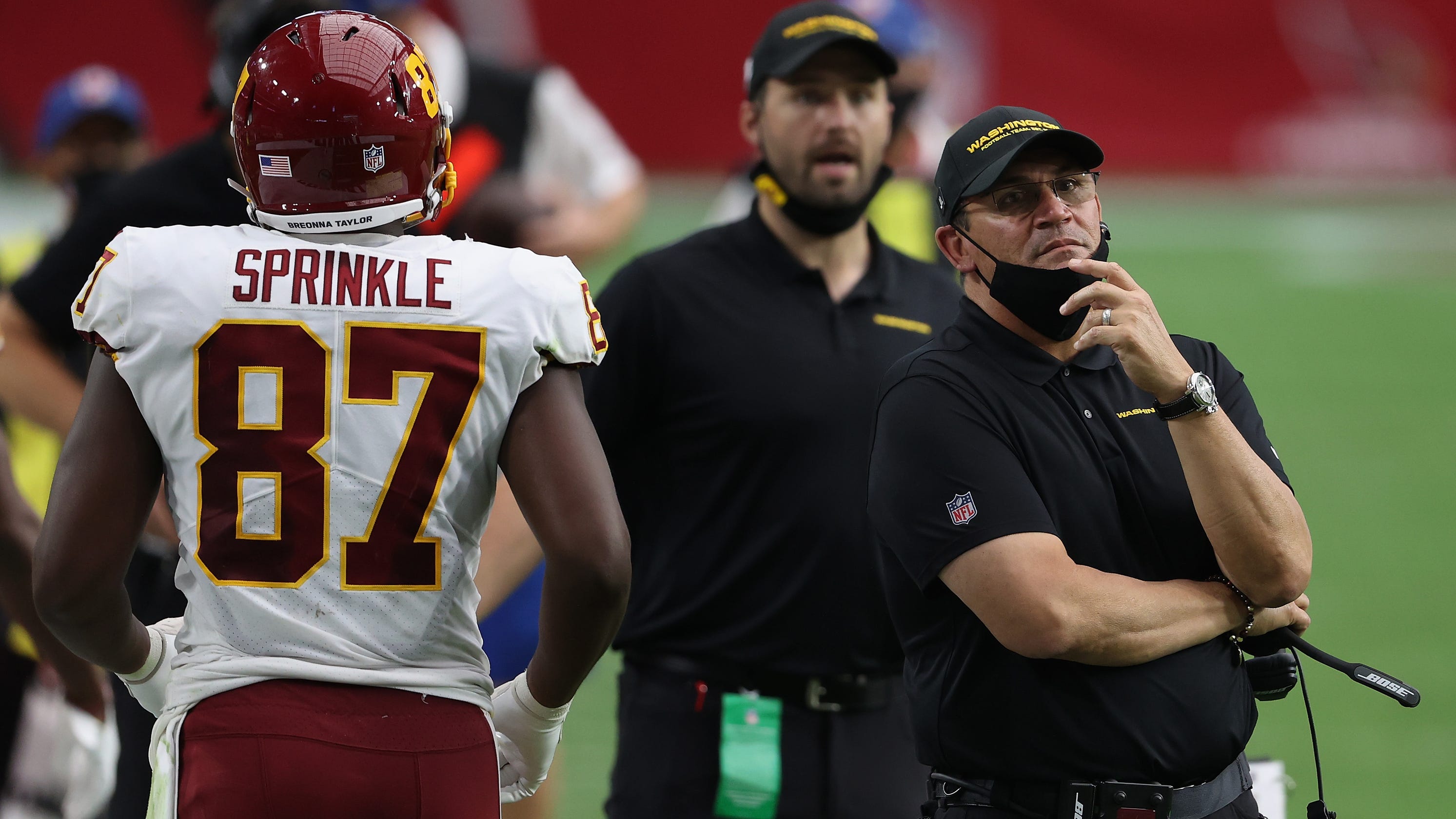 Benching Dwayne Haskins could be costly mistake for Ron RIvera

SportsPulse: A quarter of the season is in the books. The Dallas Cowboys and Houston Texans would probably like a redo. Mackenzie Salmon reveals our biggest risers and fallers in this week’s power rankings.

Four weeks. That’s all it took for Ron Rivera to fall into the same trap that so many of his predecessors with the Washington Football Team have for the better part of the last two decades.

It’s the same mistake that has prevented the team from completing the many renovations that highly touted coaches and talent evaluators have attempted. It’s why the franchise remains in the dregs of mediocrity.

When he announced Wednesday that he was benching quarterback Dwayne Haskins, the No. 15 pick of the 2019 draft, and turning to Kyle Allen, the third-year pro who previously played under Rivera for the Carolina Panthers, the coach acknowledged, “I’m taking a shot at the short term for the short-term glory.”

And that win-now approach when the roster isn’t at all in a win-now stage of development could prove costly for Washington’s immediate and long-term goals. 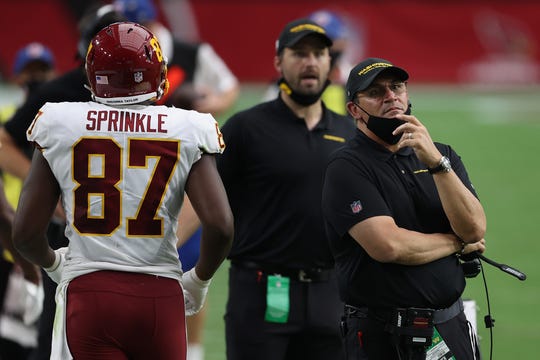 Head coach Ron Rivera of the Washington Football Team reacts during the first half of the NFL game against the Arizona Cardinals at State Farm Stadium on September 20, 2020 in Glendale, Arizona. (Photo: Christian Petersen, Getty Images)

But Snyder turned to Rivera to bring the same steadyhanded leadership to Washington that he displayed during his nine seasons with the Panthers.

Rivera now appears dangerously close to making the a miscalculation similar to his predecessors by thinking his roster is better than it is.

When he inherited a 3-13 team with few building blocks, Rivera and the rest of his coaching staff and front office made their intentions clear. This would be a gradual rebuild driven by a vision of the long-term rather than immediate wins and loss tabulations.

The plan seemed to call for evaluating Haskins throughout the offseason, training camp and, if the Ohio State product won the starting job, for as much of the season as possible so Rivera and the organization would know if they had their quarterback of the future.

But the coronavirus’ impact on the NFL meant no offseason practices or preseason games, depriving Haskins of occasions for growth.

Yet Rivera named him the starter. Meanwhile, aware that this team wasn’t in win-now mode, Washington filled its roster with developmental project players, parting with many established veterans in hopes the moves would afford those young players ample opportunities to learn on the job.

But at the quarter mark of the season, with Haskins’ play uneven and not a single team in the NFC East sporting a winning record, Rivera has benched the potential future of the franchise, admittedly shifting his goal because of circumstances around him.

“You look at where everybody else is in our division: 1-2-1, 1-3, 1-3 and 0-4,” Rivera said. “We haven’t been as successful as I like to be in those four games, and I haven’t seen the growth that I was looking for in those four games. So, to continue to do that with a chance to step up in the division, I think I’d be wrong to continue to try to do the same thing. … If we come out of this having won three of the four, we’re right in the middle of it. OK? Right now, is the chance that I think is the time to take the shot to see.”

Yes, Washington surprised the Philadelphia Eagles with a comeback win in Week 1. But this isn’t a team capable of making a playoff push.

Even if he had played out of his mind for the first stretch of the season, Haskins is one player. He can’t mask the team’s many other deficiencies.

Rivera has sent mixed messages about his quarterback in recent weeks. Immediately after Haskins’ three-interception performance in a loss to the Cleveland Browns, Rivera pointed out that Haskins had only started 10 games and said the signal-caller was still a rookie in his eyes. But the following day, Rivera told reporters that the locker room deserved better play from its quarterback and that, eventually, there was a cutoff point to his patience. Late last week, the coach praised Haskins’ work ethic and play in practice.

Haskins avoided disaster Sunday while throwing for 314 yards in a loss to the Baltimore Ravens, yet he did commit one grave error in Rivera’s mind. Facing a fourth-quarter fourth-and-goal from the 13 after taking a sack for an 18-yard loss two plays earlier, Haskins checked down to a receiver who was stopped short of the end zone. Mindful of the warning from the week before, the quarterback didn’t want to throw an interception into double coverage.

Rivera told reporters he had gone for it rather than attempt a field goal because he wanted to test Haskins’ situational awareness. Haskins had failed in Rivera’s mind, and three days later, the coach deemed his quarterback unfit as a starter at this early stage in his career.

Rivera chalked up Haskins’ uneven play to not having had the benefit of the preseason and offseason program. He said that Haskins just needed more time, and that in his estimation, it takes 5,000 reps in the team’s new offense to become proficient. But that raises two questions: If Haskins was never adequately prepared to start, then why was he given the job? And, if Haskins needs more reps, how is he supposed to get them as the third-string quarterback behind Allen and newly elevated backup Alex Smith?

To the first, Rivera answered, “Because we had to find out. I felt like we had four games if we could come out 2-2, I could stay with Dwayne… But we’re 1-3. Watching the games, Dwayne needs some more work. … With the division is where it is right now, I’d be stupid not to try to put the ball in the hands of someone who’s been in the system and a guy who knows it.”

But here’s the thing. This roster, with a patchwork offensive line and subpar receiving corps, does not provide an adequate supporting cast for many quarterbacks — including Haskins and the new starter.

Washington has no one on their roster capable of shouldering such a load to ease pressure on the quarterback.

The worst thing to happen to Washington this season was to pull off that stunner over the Eagles, which gave Rivera the impression that this team is better than it is. Washington can’t contend with any of the elite NFC teams and still struggles against other rebuilding teams.

Sunday’s meeting with the Los Angeles Rams could be a blowout. Perhaps Washington could split with the New York Giants, whom the team will face twice in a three-week span with a matchup against the Dallas Cowboys wedged in the middle.

But emerging from the next five games with a 1-4 or 2-3 record doesn’t accomplish anything. Better to forge on with Haskins, the potential long-term answer, taking valuable reps. If Haskins struggled, it would remove any doubt about his standing.

“We’re in a situation where, if we’re still trying to teach one guy and the other 52 aren’t given the opportunity to see whether or not we can win the next four games, that’s not fair,” Rivera said. “We’re trying to develop a young quarterback, but we’ve got one eye on what’s happening in our division. If somebody was 4-0 and somebody was 3-1, OK. But there’s a chance to win the division, so we have to look at it that way. We’ve got four games that are very winnable, very viable and we have to see what happens.”

Most likely, Washington falls short of that goal by a good bit. Say Allen plays like he did in Carolina and struggles to take care of the ball as Washington’s losses continue to mount. Then what?

Turn to Alex Smith, who has completed a remarkable recovery from a broken leg that doctors feared would have to be amputated? Return to Haskins?

Rivera’s lunge toward a pipe dream of winning the NFC East could prove costly — to Haskins’ development and to Washington’s need to build for the long-term.

If you enjoy talking football, we have the perfect spot for you. Join our Facebook Group, The Ruling Off the Field, to engage in friendly debate and conversation with fellow football fans and our NFL insiders. Do the right thing, sign up now!