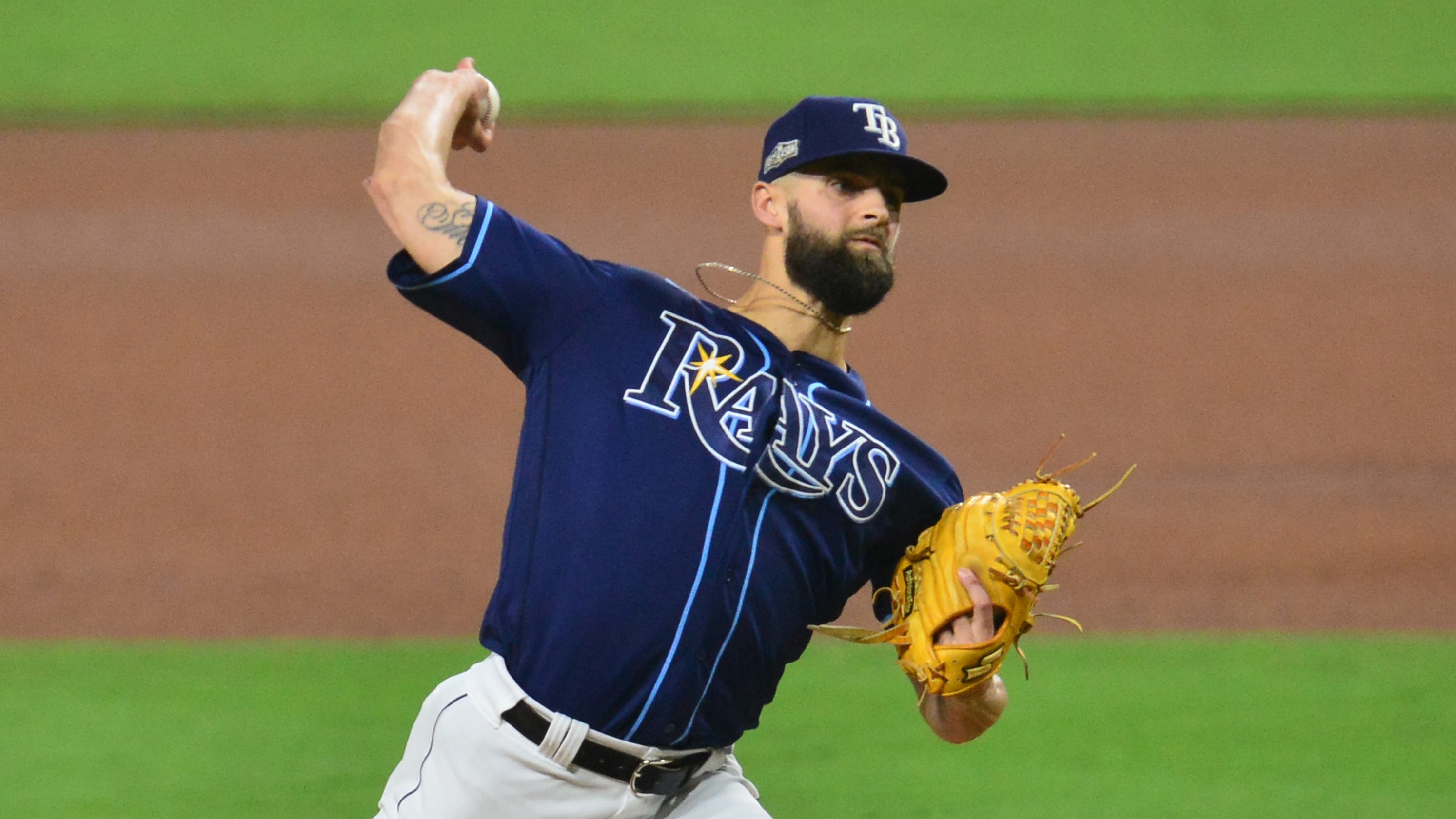 Major League Baseball’s playoffs are officially cooking, what with four high-quality series and no off days to slow the momentum. Tuesday brought the first of at least two consecutive quadrupleheaders, with the American League Division Series getting two games deep, while a pair of NLDS got going.

Wednesday’s action could send one team on to the championship series, and will lend greater clarity to the three other series, as all eight squads look to mitigate a more grueling set-up played at four neutral sites.

Before things get cooking again, a look at four things we learned on the first full day of the division series:

Petco Park is no place for a pitcher this week, not with temperatures soaring, the ball juicy and generational sluggers firing their “A” swings like John Daly in the tee box. Twelve home runs were hit in the first two games of their AL Division Series, and the 458-foot blast struck by Giancarlo Stanton – his third in two nights – should probably count as two.

Trailing 1-0 entering Game 2, there was really only one option for Tampa Bay Rays pitchers: Don’t let the Yankees put the ball in play.

The Rays struck out 18 Bronx Bombers, a playoff record, and while 100-mph man Tyler Glasnow cleared the path by punching out 10 over five innings, it came at a cost: 93 pitches that prompted his removal after issuing a leadoff walk in the sixth, a hook that came three outs sooner than manager Kevin Cash probably mapped out. 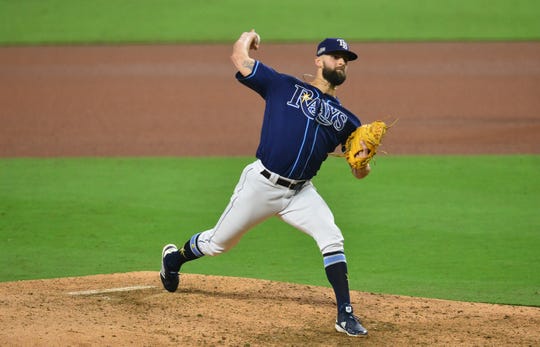 Nursing a 6-4 lead, set-up man Diego Castillo punched out Luke Voit and Stanton, ramping his fastball up to 98 mph. Cash tried to steal one more inning from Castillo in the seventh, but a walk and single scotched that plan quickly.

So, it was “closer” Nick Anderson coming on in the seventh, and we say “closer” because 13 Rays have saved games this season. But Anderson is the nastiest of them all, and with two on, in a 7-4 game, this was his time.

Anderson punched out one more in a perfect eighth, his longest outing of the season that stole Cash his missing inning. That left Pete Fairbanks for a shaky but successful save in their 7-5 victory.

“Everybody in the ‘pen is nasty,” said Anderson. “I think winning the game is more important than getting a bunch of strikeouts.”

Sometimes, you get both.

It seemed too good to be true: Mike Clevinger, the Padres’ centerpiece trade deadline acquisition, would, in fact, be on the NL Division Series roster despite recent arm problems. He would, in fact, start Game 1. And the Padres would have a puncher’s chance against the vaunted Los Angeles Dodgers.

Turns out it was, in fact, a mirage.

Clevinger could not complete the second inning, his fastball velocity diminishing to 91 mph before he was removed, a devastating blow for a team also missing Dinelson Lamet, its No. 1 starter most of the year.

For a moment, though, the Padres looked like they might outflank the Dodgers with a stirring all-hands relief effort that held L.A. hitless into the sixth inning.

Instead, the dam burst as the Dodgers struck for four runs, a quick strike of situational hitting and soft contact greatly rewarded. The Dodgers would win 5-1, but the greater concern for the Padres and any future Dodger opponents is how the eight-team NL West champs can go off script and survive.

No. 1 starter Walker Buehler struggled mightily, walking the bases loaded in the second and falling behind Trent Grisham 3-0 in the second. He came back to strike out Grisham, but still walked a career-high four and was done after four innings.

No matter. Shaggy-haired rookie Dustin May led a more effective Dodgers cavalry, leading a contingent of four relievers who’d pitch five innings of on-hit ball. Clayton Kershaw gets the ball in Wednesday’s Game 2. The Padres, for now, are countering with TBD.

And down Clevinger, Lamet and 1-0 in a five-game series, they’re in a lot deeper than they imagined.

A’s-Astros: Changing of the guard

When the Houston Astros got within one win of a World Series last year, a pitching trio that will pull in at least $984 million in career earnings was the biggest reason why.

But in 2020, Gerrit Cole is a Yankee. Justin Verlander underwent Tommy John surgery. And now Zack Greinke is suffering from an arm injury.

Yet the Astros are once again on the doorstep of a fourth straight trip to the AL Championship Series.

In Game 2 of their ALDS against Oakland, Framber Valdez gave up a pair of solo home runs but nothing else over seven innings, keying the Astros’ 5-2 victory that gave them a 2-0 series edge.

Valdez’s outing comes on the heels of his sterling relief effort in the wild-card series opener, when he picked up for an ineffective Greinke and tossed five shutout innings at the Minnesota Twins, enabling Houston to come back for a 4-1 win.

Now, it turns out, Greinke “is ailing some,” according to manager Dusty Baker, and had some undisclosed tests performed. Not great.

But Valdez is at the forefront of a new set of Astros arms capable of putting up zeroes, a group that includes rookie Cristian Javier, relievers Enoli Paredes and the Game 3 starter, Jose Urquidy.

Urquidy won a virtual do-or-die Game 4 in the 2019 World Series and combined with Javier for 7 1/3 innings of one-run ball to close out the Twins. Neither are Cole or Verlander. It also may not matter.

“Urquidy’s been dealing,” Baker said, “and that was an easy choice.”

What does it say to bat cleanup in a lineup that includes Freddie Freeman, Ronald Acuna Jr., Marcell Ozuna, Adam Duvall, Nick Markakis and Ozzie Albies?

It says Travis d’Arnaud paid off better than almost any off-season pickup.

Baseball’s lengthiest lineup features a journeyman catcher in the middle, a guy who cycled through New York and L.A. and Tampa Bay last year before finding a groove. Now it seems he may never lose it.

Signed to a two-year, $16 million deal last winter, d’Arnaud struck the decisive blow in the Atlanta Braves’ 9-5 Game 1 win over the Miami Marlins, a three-run homer that put a cap on his 3 for 3 performance.

How big was it? The Braves trailed 4-1 at one point and 4-3 entering the seventh before d’Arnaud’s blast off Yimi Garcia to dead center field.

“I can’t say enough. He’s been unbelievable,” Braves manager Brian Snitker said of his 6-2, 210-pound catcher. “The person, the player. He’s gotten a lot of hits over the course of this season.

“I love the body type for a catcher, because he doesn’t expend too much energy catching.”

Nor trotting around the bases.