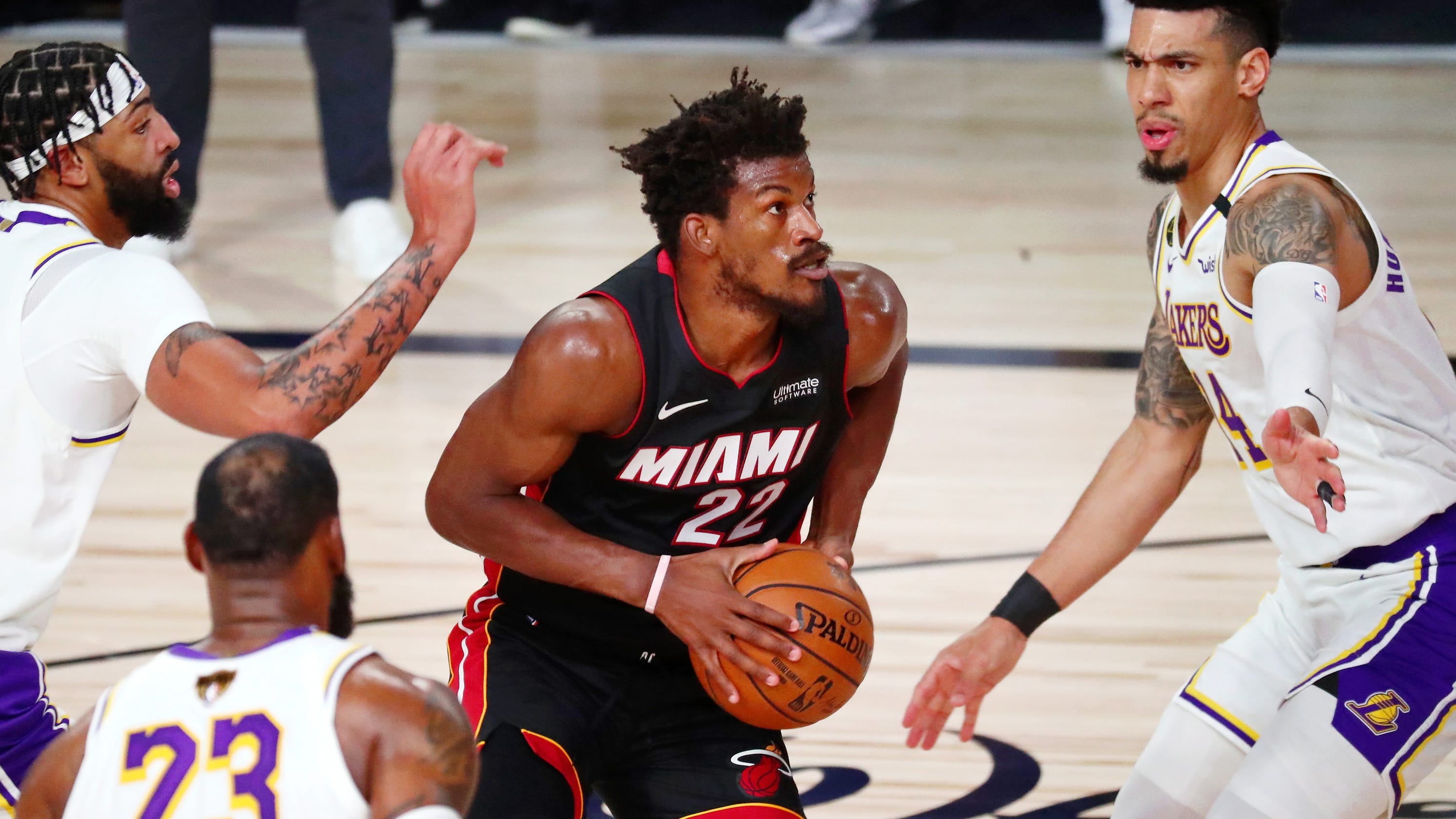 Can Jimmy Butler do it again in NBA Finals?

What I’m Hearing: USA TODAY Sports’ Jeff Zillgitt discusses the game plan for the Lakers heading into Game 4 of the NBA Finals after dropping Game 3 to the Heat in ugly fashion.

In took one of the most memorable NBA Finals performances ever, but the Miami Heat are back in the series against the Los Angeles Lakers.

And if you believe Jimmy Butler, the Lakers are in trouble.

Butler posted the third 40-point triple-double in Finals history in Game 3, finishing it off by telling LeBron James, “You’re in trouble,” after his final bucket. With a key return coming in Game 4 on Tuesday (9 p.m. ET, ABC), the Heat have a chance to even the series and silence talk of an inevitable Lakers title.

Heat starting center Bam Adebayo will be back in the lineup for Game 4 after missing the last two games with a neck strain. While starting point guard Goran Dragic remains out after also missing Games 2 and 3, Adebayo’s return should be a huge boon for the Heat as they try to become just the fifth team to overcome a 2-0 deficit in the Finals.

LAKERS HAVE 2-1 LEAD: What history tells us about their title chances

PRESSING ON: How Butler keeps playing through heavy workload for Heat

STAY CALM: LeBron and AD not overreacting to Lakers’ loss in Game 3

“I’m trying to get back as quickly as possible,” Adebayo said Monday. “They’re just trying to make sure I’m safe and I’m ready to play.”

After dominating the first two games of the series, the Lakers aren’t panicking after one loss. They had one of their worst outings of the playoffs in Game 3, turning the ball over 19 times. James knows cleaning up their sloppy play will be a huge factor for the Lakers.

“You can’t allow (the Heat) to have extra possessions, you can’t turn the ball over at that high rate,” James said. “I’ll be a lot better with security of the ball.”

Can James and the Lakers regain control of the series, or will the Heat throw another counter-punch and even things up? Here are three keys to watch in Game 4:

After pouring in 34 and 32 points in the first two games, Lakers big man Anthony Davis battled foul trouble in Game 3 and was limited to 15 points on nine shot attempts. One or two fouls may have been suspect calls, but a couple were careless on Davis’ part. The Lakers will need Davis on the floor as much as possible and free of foul trouble to reestablish their dominance of the paint, especially with Adebayo bto anchor the middle of the Heat defense.

SportsPulse: To the surprise of many, the Miami Heat will not be swept by the Los Angeles Lakers and that’s in large part because of the massive effort by Jimmy Butler in Game 3 who finished with a triple-double.

What does Butler have in store for Game 4 after a performance for the ages? With Dragic sidelined, Butler has had to take over as Miami’s lead play-maker on offense. He’s been nothing short of spectacular in the Finals, averaging 29.3 points and 10.3 assists with 58% shooting. Miami may need another huge game from Butler to overcome a Lakers defense that still enjoys a significant size advantage and is capable of stifling opponents when fully engaged.

Defensively, the Heat have strategized packing the paint on drives to force kick-out passes and make the Lakers beat them from outside. The Lakers are attempting 42.3 shots from 3-point range per game in the Finals, up from 31.6 in the regular season and 31.9 in the first three rounds of the playoffs, but they haven’t shot well (35.4%). Danny Green (20%) and Kentavious Caldwell-Pope (25%) have been particularly bad from long range. If the Lakers can take advantage of open looks from the outside, they can put a lot of pressure on the Heat defense.