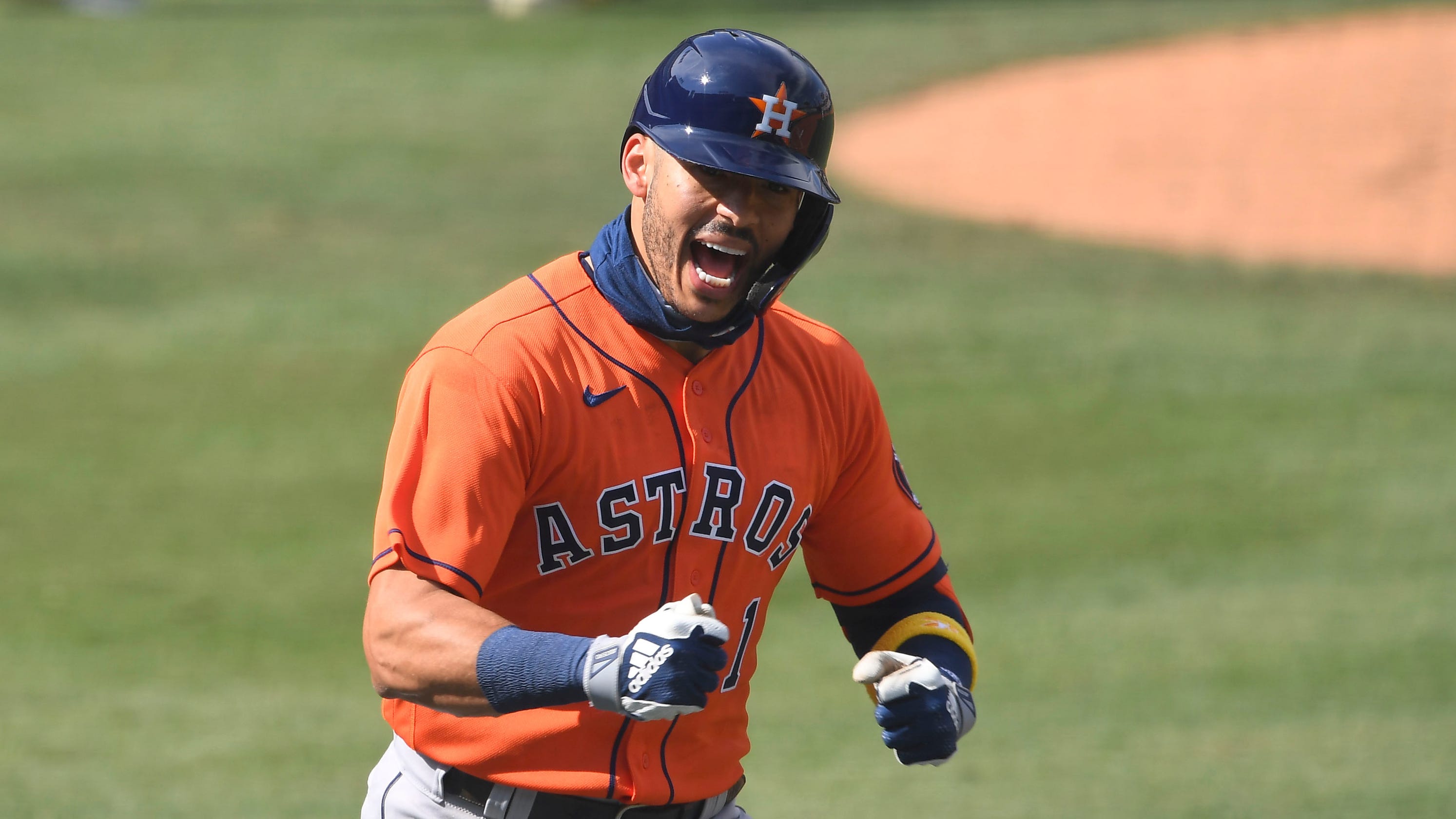 This odd Houston Astros journey into October has been so much about re-writing history, re-litigating championships won under dubious conditions, saying the things people may want to hear, that it’s easy to forget the actual, physical ability of the central characters.

And come autumn, few are better than Carlos Correa and George Springer.

Yeah, there’s no 2017 do-overs, no surrendering of a World Series trophy the Astros won partially, probably significantly, through dubious means, with an electronic sign-stealing scandal sullying their championship and various legacies.

But physical skill and the ability to perform under duress don’t just disappear because your foibles are exposed for all the world to see. And Monday afternoon, under a crackling sun that conspired to send baseballs into Dodger Stadium’s nether reaches, the Astros probably won their American League Division Series, due in large part to two of the greatest postseason performers in baseball history.

Major League Baseball’s response to the novel coronavirus determined they’d play this ALDS against the Oakland Athletics in the same stadium the Astros concluded their 2017 World Series, where Springer was named Series MVP and Correa got down on a knee and became an engaged man, live, on national television.

This time, they arrived sullied heroes, and still searching for the timing and production that eluded them during the Astros’ 29-31 season, a far cry from their three consecutive 100-win seasons.

In one afternoon, though, they served notice that this postseason stay may also be an extended one.

Correa leveraged that 91-degree L.A. afternoon and perhaps some hyperactive baseballs to pound a pair of home runs. Springer merely collected four hits and wore out an A’s pitching staff that bested the Astros in the regular season but in October suddenly looks very overmatched.

And in erasing a pair of early deficits and registering a 10-5 victory, the Astros and their two October stalwarts showed something resembling normal.

“Water seeks its own level. George is closing in on 200 ABs and that’s about the time the big boys start swinging it,” mused manager Dusty Baker about Springer, who batted .265 in a pedestrian regular season, perhaps his last in Houston.

He and Baker credited recent work with hitting coach Alex Cintron to right some mechanical woes that dogged him late in a year in which he produced a career-worst .709 OPS. It showed when he slugged a pair of home runs in their two-game sweep of Minnesota.

And even moreso Tuesday, when Correa’s two-run homer off A’s ace Chris Bassitt erased a 3-1 deficit in the fourth inning.

Indeed, Correa became the first shortstop in big league history to have multiple multi-homer playoff games. He now has 16 career playoff homers, which, at 26, moves him into the top 10 all-time.

The man Correa tied at No. 10? Carlos Beltran, who was the clubhouse conductor behind the Astros’ sign-stealing scheme that significantly marred their 2017 title and made them springtime punching bags in the weeks before COVID-19 shut down the industry.

Correa may carry the villain tag forever. McCullers, his 2012 draftmate and admittedly one of his best bros, thinks that’s silly.

“Carlos Correa is not a villain. He’s an amazing human, a humanitarian,” says McCullers, who was dinged by three home run balls in his four innings of work. “He takes care of Houston. He takes care of Puerto Rico.

“The way people want to perceive us is fine. We have to go out there and win playoff games.”

Springer, meanwhile, now has 60 career postseason hits and an OPS approaching .900. A free agent this offseason, he will make a centerpiece in somebody’s outfield, but also might claim another championship on his way out of town.

There’s still 10 more wins to stack, which may do little to dissuade the skeptics. It would certainly wash the taste of a most miserable year.

“I just think we slowed it down, finally, understood that this is the playoffs,” says Springer. “You never know if you’re going to get back here, so you might as well enjoy it.”