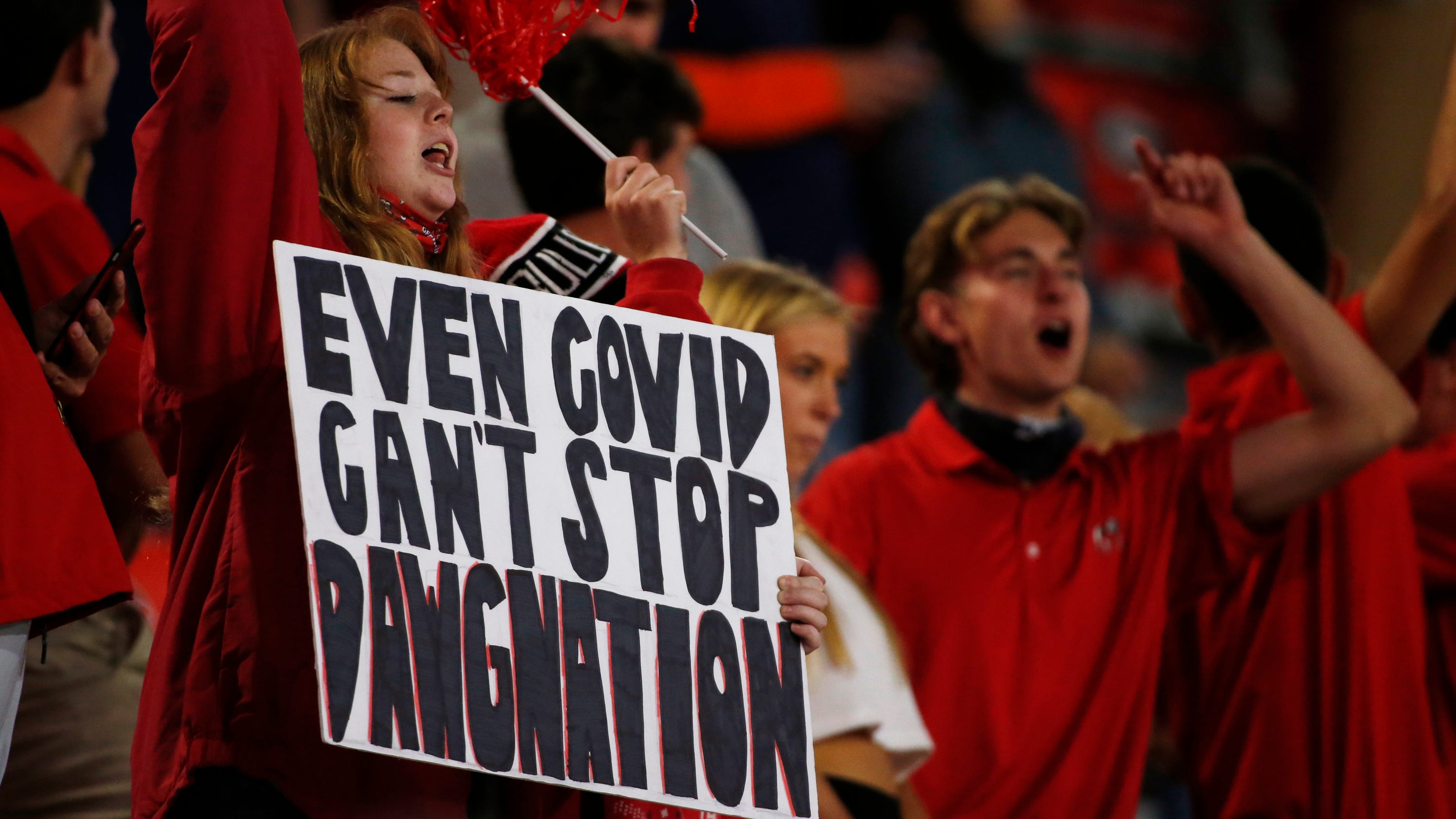 Georgia to address student seating after backlash during Auburn game

Georgia athletic officials will take steps before Saturday’s home game against Tennessee to address the issue of too many students gathering closely together after photos went viral this weekend from the first game in Sanford Stadium under reduced attendance.

Senior deputy athletic director Josh Brooks said there would be more staffing and better enforcement in the popular lower north 100 sections to remind fans to stay in their seating area, and students will be funneled to two other student areas elsewhere in the stadium.

“The biggest takeaway from me is we had 99% compliance from all of our fans. It’s just refining that 1%,” Brooks said. “The majority of our students were great. They had great attitudes, they were respectful, they were compliant, but it just takes a few who without having malicious intent just filtered down or get into areas where they’re not supposed to sit, especially when the cameras are down there and they’re trying to get a great camera crowd shot.”

no but seriously wtf is this? pic.twitter.com/iPWQ1VrCjV

Georgia had about 3,000 students in its announced attendance of 20,524 for its win over Auburn on Saturday night. It will be a different group of students for each of the three remaining home games, Brooks said.

Yea. I didn’t like that but it’s the student section. Here’s what the rest of the stadium looked like. pic.twitter.com/ZWA5bjKCro

The student seating — in pods of four — is marked off with a red vinyl wrap on top of the aluminum bleacher to designate where they are supposed to sit or stand.

Re-Rank: Alabama jumping Ohio State for No. 2 among many changes

SEC stadiums are reduced from 20% to 25% under COVID-19 protocols. Sanford Stadium’s total capacity is listed regularly at 92,476 and was filled at 22.2% Saturday.

“Just about one-fifth capacity but it feels a lot more crowded than that,” ESPN play-by-play voice Chris Fowler said on air before kickoff. 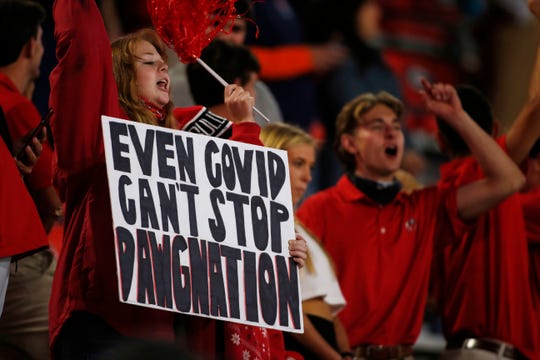 That might have something to do with how Brooks and his staff laid out the chairback seating in the stadium, using a stair-step pattern that makes it appear more packed, Brooks said.

“We explored several different seating patterns and came up with a pattern that was most efficient which basically yields the most seating which got you to 21%,” Brooks said. “The original models I looked at were at 17 or 18 percent. That’s what a lot of venues went with, the more simple, stacked approach.”

Some who saw the game air on TV were alarmed by fans sitting closely together, many without masks. Social media lit up with images seen from the ESPN national broadcast.

The SEC’s fan health and safety fan guidelines include “face coverings (over the nose and mouth) shall be required as a condition of all guest ingress, egress, and movement throughout the stadium, as well as any time guests are unable to maintain the recommended physical distance from others who are not in their same household.”

The SEC did not return a Sunday message seeking comment on any response it may have to questions raised about the fans in Sanford Stadium. Brooks said he had not heard from the conference.

Face coverings are not required in the seating area at Sanford Stadium, a policy that is similar to Tennessee’s. Ole Miss also won’t be requiring fans to wear masks when seated, only when entering and exiting the stadium and moving about the concourses. That’s a change from its home opener when face covering were to be worn at all times but the stadium PA announcer came on the loudspeaker multiple times to remind fans to wear face coverings even when seated.

SEC schools that require masks to be worn in their stadiums at all times: Alabama, Missouri, LSU, Kentucky, Arkansas and Auburn. That’s according to beat writers who cover those teams for the USA Today Sports Network. Exceptions are made when eating or drinking.

At Vanderbilt’s home opener against LSU, the crowd was made up of only a limited number of students with no other fans of player family members. Students at Vanderbilt are tested weekly for COVID-19 and they seemed to comply with a mandatory mask policy. No concessions stands were open.

If the rule at Sanford Stadium is you don’t have to wear a mask at your seat, well y’all … that is a really dumb rule.

Brooks said not requiring face covering at seats “is a decision we made that we feel comfortable with. Two of the factors for us is it’s an outside event and once they’re at their seats they’re socially distanced from other groups.”

Brooks said the response he’s received from students, fans and donors who attended the game has “been overwhelmingly positive. The negative has been from what people may have been taken out of context on one shot on TV from one small group.”

Georgia’s policy for events in Stegeman Coliseum starting with volleyball will be masks are required.