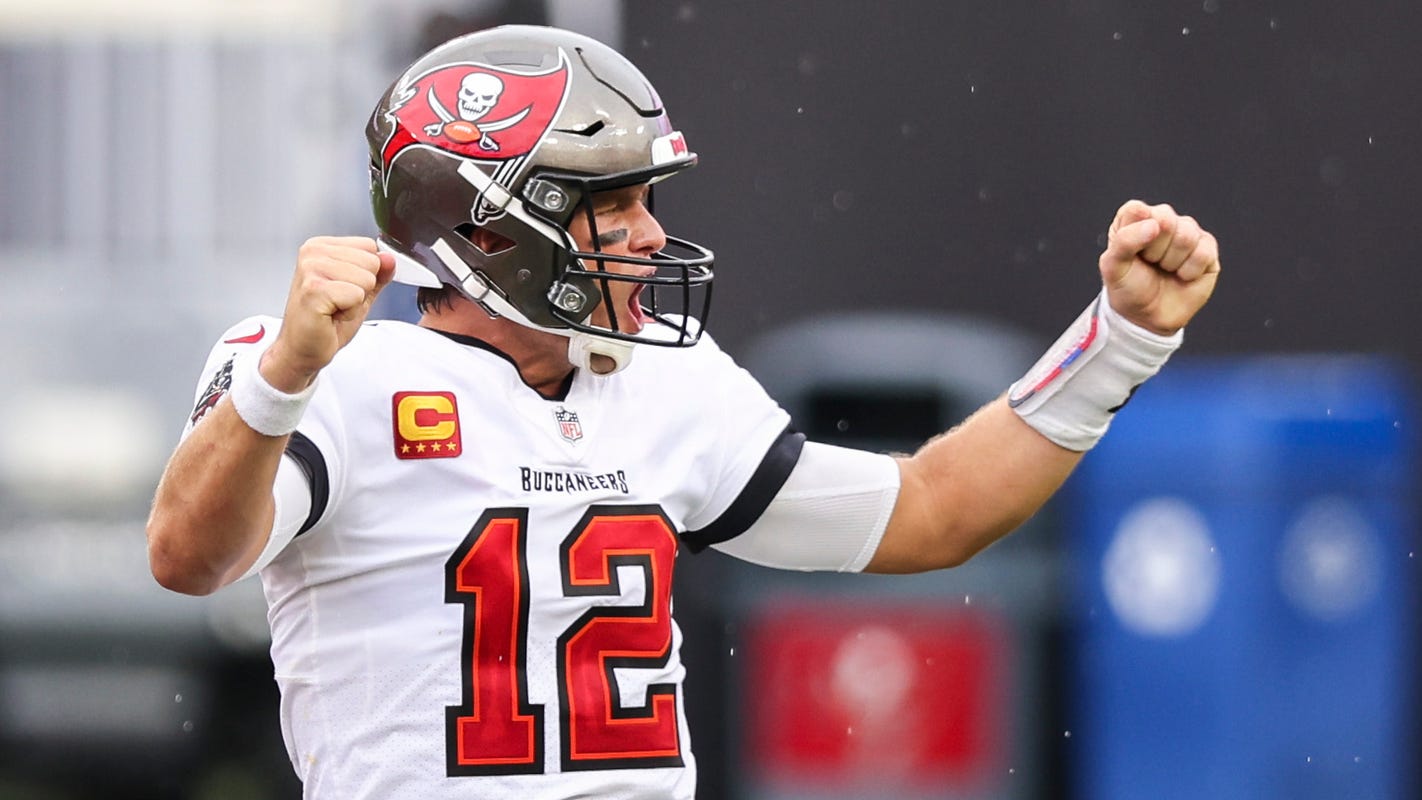 SportsPulse: The first quarter of the NFL season is nearly in the books and it’s the first time with confidence we think we know where everyone stands. Mackenzie Salmon “overreacts” to the biggest storylines from Week 4.

1. Difficult as it may often be, this week was a stark reminder to remain ever vigilant in the battle against COVID-19. The president’s positive test was bookended by a pair of NFL games being postponed after the 2020 season’s first three weeks of relative normalcy had perhaps lulled many in and around the game into a false sense of security. If you work at the White House, if you’re on an NFL sideline, if you’re buying groceries – please, wear a mask and wash those hands.

1a. We see you wearing a mask in Levi’s Stadium’s empty stands, Liam McHugh. Good man – even if Santa Clara County compelled you – you’ve made great progress since opening night in Kansas City. Props to you and the NBC crew.

2. The NFL also treats October as a stark reminder to remain ever vigilant in the battle against cancer – the league and American Cancer Society promoting the “Crucial Catch: Intercept Cancer” initiative for the 12th consecutive season. The effort is designed to address early detection, screenings, and risk reduction efforts to combat the insidious disease. Get checked out if there’s a question in your mind, y’all.

3. How ridiculous has scoring been in the 2020 season? Every game has featured at least two touchdowns … though the Colts and Bears nearly ruined the party Sunday, Chicago WR Allen Robinson, uh, coming through with a garbage time TD in the final 95 seconds of a 19-11 defeat.

4. Through Sunday’s action, NFL games are averaging a ridiculous 51.7 total points. Even before Monday night’s contests kicked off, the 3,151 points tallied league-wide are the most ever through four weeks in the Super Bowl era. Who knew defense was on the verge of extinction?

4a. All those points tend to mean your team probably has a chance until the final gun sounds. Tampa Bay dug out of a 17-point hole in Sunday’s defeat of the Chargers – the first time in league annals that one team in each of a season’s first four weeks has overcome a 16-point deficit and won.

5. An update on the current state of the NFC East? A winless team can notch its first victory in Week 4 … and vault into sole ownership of first place by a half-game.

6. The latest noteworthy fact added to the Tom Brady record book? The Buccaneers quarterback, 43, became the first since at least 1950 to start against a QB 20 years his junior after facing 22-year-old Chargers rookie Justin Herbert.

7. For the record, TB12 notched the win by throwing for at least five TDs for the eighth time (including playoffs) in his career.

7a. Brady became the oldest player ever to finish a game with five TD passes.

7b. He also threw scoring strikes to five different players for the first time in his 21-year career.

7c. Lastly, Brady broke the record held by his 41-year-old self, becoming the oldest to throw for at least a trio of TDs in consecutive games.

8. But shoutout to hard-luck Herbert, who finished with 290 yards and three TDs through the air despite being without RB Austin Ekeler for most of Sunday and WR Mike Williams for all of it. The Bolts have lost all three of the rookie’s starts, but he’s hardly to blame … and should remain in the lineup even when veteran Tyrod Taylor is healthy. Call it the Tom Brady rule.

9. Props to Seattle, which prevailed despite what has to be the most severe road trip the NFL can serve up. The Seahawks flew from the Pacific Northwest to Miami – more than 2,700 miles – and still got saddled with a 1 p.m. ET kickoff against the Dolphins. No worries. Seattle won 31-23, giving the franchise just its second 4-0 start. The other occurred in 2013, the only time the Seahawks wound up with a Super Bowl victory.

10. A relatively quiet day for Seattle QB Russell Wilson, who’s dominating the (premature) MVP conversation but threw just two TD passes Sunday. No matter … Wilson’s cooking has been scrumptious, his 16 TD passes tied with Peyton Manning (2013) for most ever after four games.

12. Prior to Sunday, it had been 16 years since the Bills had scored at least 27 points in four straight games … remarkable, especially since QB Josh Allen ain’t exactly triggering a K-Gun offense. These aren’t your older brother’s Bills – maybe not your fraternal twin’s Bills – but they are quite exciting … and stand to benefit from the Patriots’ pandemic problems.

13. While no one is saying LeBron James is a fair-weather fan (I’m simply writing it), his tweets Sunday showed a lot more excitement and enthusiasm for the Cleveland Browns – they play about 40 minutes from James’ hometown of Akron – than the Dallas Cowboys, whom James has historically given his full support. Sorry, Dak.

14. But maybe King James is just illustrating his wisdom, jumping a Dallas ship that appears to have hit an iceberg amid a disappointing 1-3 start following Sunday’s 49-38 setback.

15. The Cowboys have surrendered 146 points, most in franchise history through four games. The Browns also ran through them for 307 yards on the ground, more than any Dallas team has ever ceded in one contest.

16. But don’t blame Dallas QB Dak Prescott, who might win a lot of fantasy football championships … if nothing else. Sunday, he became the first player in league history to surpass 450 passing yards in three consecutive games. Prescott, who had a career-high 502 yards against Cleveland, has 1,690 for the season – an NFL record after four games.

17. This is the seventh 1-3 start in Cowboys history. Only once (1996) have they recovered to reach postseason.

18. Conversely, the Browns are 3-1 for just the second time since their 1999 reboot. They continue to thrive with a run-heavy approach, efficient play from QB Baker Mayfield and big plays from the defense. Even WR Odell Beckham Jr. made a huge impact at Dallas, scoring the first rushing TD of his career while finding the end zone three times in sum for the first time in nearly five years.

18a. Cleveland has scored at least 30 points in three straight games for the first time in 52 years.

19. Another huge difference between Cleveland and Dallas? The Browns have 10 takeaways in 2020, while the Cowboys have nine turnovers.

20. Congrats to Bengals rookie QB Joe Burrow, who notched his first career win as Cincinnati racked up 505 yards in a 33-25 defeat of the Jaguars. Burrow’s 116 completions are the most ever in a player’s first four games, exceeding the previous mark by 10. He is also the first rookie in league history to pass for at least 300 yards in three straight games.

21. The Lions sprinted to a 14-0 lead over the Saints on Sunday and also scored the game’s final 15 points. In between? Detroit gave up 35 unanswered. Per Elias, the Lions are the first team in league history to drop six consecutive games after leading by at least 10 points in each.

22. The Falcons’ luckless Dan Quinn has been the target of most of this season’s chatter about premature termination of employment. Don’t worry, Dan, the Jets’ Adam Gase and Lions’ Matt Patricia are here to take some of the heat off your seat.

23. Virtual elimination game in Houston? Neither the Texans nor Vikings have ever made the postseason after an 0-4 start. But that’s were Houston is after a 31-23 loss to Minnesota … which, it must be noted, has never been to the playoffs after an 0-3 start, either.

24. And speaking of hot seats, what case does Texans coach Bill O’Brien make for his job … whenever he gets called into the office of Texans GM Bill O’Brien? Can’t be a comfortable conversation.

25. How much sense does the NFL make? Without the best running back in the league, Christian McCaffrey, the Panthers are 2-0. Naturally.

26. Sam Darnold gave the sad-sack Jets their first lead of the season Thursday night with a 46-yard TD run, the longest by a quarterback in franchise history.

Helluva run by Darnold! The juke move once he got out the pocket was a RB elite move

27. But it wasn’t enough against the formerly winless Broncos and third-string QB Brett Rypien, who dealt New York a 37-28 defeat. The last three NFL quarterbacks to win their first career starts all played for Denver (Brandon Allen, Drew Lock and Rypien).

28. Lamar Jackson never had a 50-yard run prior to the one he ripped off Sunday? Really?

Tune in on CBS! pic.twitter.com/l63ZQs9Q2T

28a. It’s true. And that TD gallop helped extend two Ravens regular-season streaks to 27 games – at least 100 rushing yards and 20 points in every one of those contests. Both stretches are the longest active ones in the league.

29. Washington didn’t beat Baltimore in Sunday’s “Battle of the Beltway,” but at least the WFT provided smirks to its fan base by picking off the only pass thrown by Ravens backup QB Robert Griffin III, formerly the face of HTTR football.

30. Good reminder to the Rams, unimpressive 17-9 victors Sunday, that you can’t look past any NFL team … and, yes, the Giants still qualify.

31. Remember the preseason buzz around the Cardinals as a playoff dark horse? Well, that may be a dead horse – one which apparently can’t throw downfield or sustain a drive.

32. Don’t get overly excited – yet – Colts fans. The last three times QB Philip Rivers helped stake his team to a 3-0 start (all in San Diego of course), the Chargers ultimately missed the playoffs. Capt. Andrew Luck, who continues to look out for the greater good of the Union, would have never been flanked after earning such an advantage on fields of friendly strife.

Please heed my advice: Stay in the house. What’s more, do not hoard Squirrel Oil. I have noticed the cows grazing six-feet apart. Splendid. The hogs may be filthy, but we must stay clean, especially our hands. Please cleanse yours often. I love you.
— Andrew