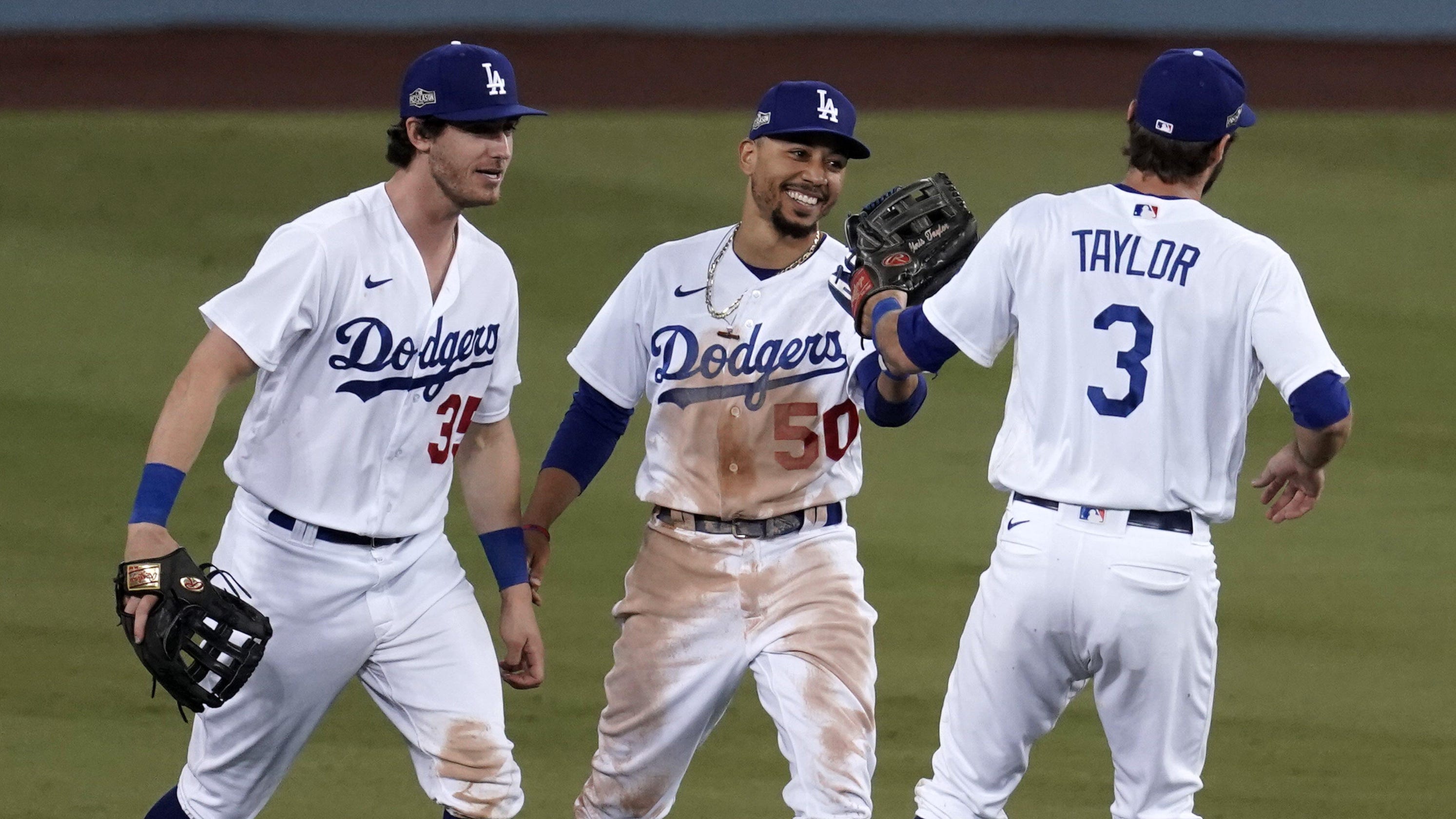 Ranking the World Series contenders 1 to 8

All that noise and revenue, signifying nothing, is behind us. It feels like Major League Baseball’s playoffs are ready to truly commence.

Certainly, the wild-card round provided highlight-reel moments in addition to shoveling additional cash into the league’s coffers in a year ravaged by a pandemic.

Yet the eight series, fortunately, did not endanger the league’s best teams and provided only mild surprises and middling revelations, such as the entirety of the National League Central’s inability to hit the baseball.

So we meander into the more familiar and meritorious Division Series, eight teams each with a legitimate stake to reach the finals and perhaps claim a championship. Running this gauntlet should put to rest any notions of an asterisk for the team left standing.

ASTROS-ATHLETICS PREVIEW: A showdown between rivals

With that, let’s break down the remaining octet and their chances at holding aloft the trophy in Texas’ Globe Life Park three weeks from now:

Collectively, they may be Sisyphus, but Sisyphus never had a pair of MVPs helping him push that boulder up the hill. Fool us 32 times, shame on us, but c’mon, can you honestly place another team ahead of the Dodgers as they bid for their first title since 1988?

The bats looked a little tight in a two-game sweep of Milwaukee, save for Mookie Betts, who socked three doubles and is playing with the security of a man with a $365 million contract and a World Series ring already in tow. He seems unstoppable, and slowly, the other bats and well-placed platoon pieces will fall in place.

Despite Clayton Kershaw’s Game 2 masterpiece, the pitching feels too unsettled for a pennant favorite. Walker Buehler’s blister remains disconcerting. Will anyone among Julio Urias, Tony Gonsolin and Dustin May seize a role as a No. 3 starter? If they require “piggybacking” with another arm, will that stretch the pitching too thin without off days for two rounds? Whither Kenley Jansen?

That all rates somewhere between nitpicking and actual concern.

It’s challenging to distill the precision and potency that make these Rays so challenging to vanquish. For one, the Rays were among the best at suppressing the home run, and Rays pitchers strike out three times as many batters as they walk. Petco Park should also help neutralize the Bronx-less Bombers in their ALDS matchup, which ultimately will come down to Rays manager Kevin Cash’s command of his lineup and bullpen vs. an opponent overly bound to the book, yet lacking the precision relievers to fulfill the manifesto.

While Blake Snell, Tyler Glasnow and Charlie Morton provide an enviable 1-2-3, the totality of their staff will only become a greater strength as the ALDS and ALCS roll on without off days. With any luck, baseball fans beyond Pinellas County will figure out which infielder is Lowe As in Woah (Nate), and Lowe As in Wow (Brandon).

Commissioner Rob Manfred says people love their brackets and we’ll say this for the Braves: They got a nice draw. The offensively erratic Reds were a perfect match for their overwhelming bullpen and 1-2 starter punch. While Ian Anderson has just seven career starts, his 50 strikeouts in 38 1/3 innings – including nine in six against the Reds – create the impression he’s going to join Livan Hernandez, Michael Wacha and others who followed abbreviated rookie years with dominant postseason runs.

Atlanta won six of 10 against Miami and scored at least nine runs in three of those wins. It will be more challenging to prevail in best-of-seven settings, but leaning on a lineup with three MVP candidates in Freddie Freeman, Ronald Acuna Jr. and Marcell Ozuna is not a bad way to live, either.

It’s easier to find a ballot drop box in Harris County than it is to find anyone outside of the 713 rooting for these guys. Yet those who live for Astros schadenfreude may want to hibernate until 2021.

First off, they made it look way too easy going into Target Field and thoroughly submitting a good Twins team, playoff history aside. It should be a little disconcerting to opponents that Zack Greinke is starting Game 3 of the ALDS. Why? Because Cristian Javier, Framber Valdez and Jose Urquidy combined to allow one earned run over 12 1/3 innings (0.73 ERA) in the wild-card series, and Lance McCullers Jr. is frothing to take the ball. They can afford to push the $200 million guy back a bit.

And here’s another fun theme for this Astros run: How unsatisfying is it to root against players who weren’t even around for the 2017 sign-stealing scandal? Certainly, Jose Altuve and Alex Bregman and Carlos Correa and George Springer will figure into any Astros advancement. But if the heroes are ultimately Kyle Tucker and Michael Brantley and Valdez and Javier, do you even get a decent hate-watch out of it?

Gerrit Cole was worth every pro rata penny, no doubt about it. Be it DJ LeMahieu, Luke Voit, Gio Urshela or the majestic Giancarlo Stanton and Aaron Judge, the Yankees’ offense is a glorious machine to behold.

Yet it will always come down to a starter such as J.A. Happ or Jordan Montgomery who couldn’t get deep enough to save an extended bullpen, a reliever such as Chad Green or Adam Ottavino or Luis Cessa asked to get one out too many, a matchup that on paper looks great but unfortunately goes awry.

This has been the Yankees’ exit plan the past two Octobers. And while there’s so many things that will go right with this team, there’s just too many spots things can go sideways – especially over a potential 12 games in 13 days.

Anyone out there still foolish enough to bet against America’s Team?

It’s true: There’s nothing the Marlins can’t overcome, be it the first and worst COVID-19 outbreak in baseball history or an offense that ranked in the lower third of baseball in OPS, home runs and weighted on-base average.

Perhaps rookie Sixto Sanchez and Sandy Alcantara’s 1-2 rotation punch can continue creating the breathing room needed for the offense to cook just enough. The back-end starters – some combo of Pablo Lopez and Trevor Rogers, most likely – shouldn’t be slept on, either. But the Braves and Dodgers or Padres will pose far greater offensive threats than the Cubs, along with the ability to win close, low-scoring games. There’s a path for the Marlins, but it’s narrowed considerably.

It’s a question that seems to dog every A’s playoff team: Can they hit elite pitching?

Oakland finished in the bottom half of the big leagues in almost every offensive category and survived the wild card round only because the White Sox walked nine batters in eight innings in Game 3. Those free passes will be harder to come by when trying to topple the Astros, the Yankees-Rays winner and the NL champ.

Meanwhile, while Game 1 ALDS starter Chris Bassitt and the bullpen are outstanding, there are far too many questions surrounding the Nos. 2-5 starters, compounded by the no-days-off format.

Even if top starters Dinelson Lamet and Mike Clevinger were healthy, any path that begins with the Dodgers is daunting. San Diego went 4-6 against its northern nemesis this year, with Lamet striking out 11 in one of those wins. But both right-handers remain doubtful for the NLDS, at least, with arm injuries.

Meanwhile, the Dodgers have posted a 1.092 OPS against second-year righty and likely Game 1 starter Chris Paddack, and the Padres’ whole-staff approach that won Game 3 of the wild-card series will only get less sustainable with each round.