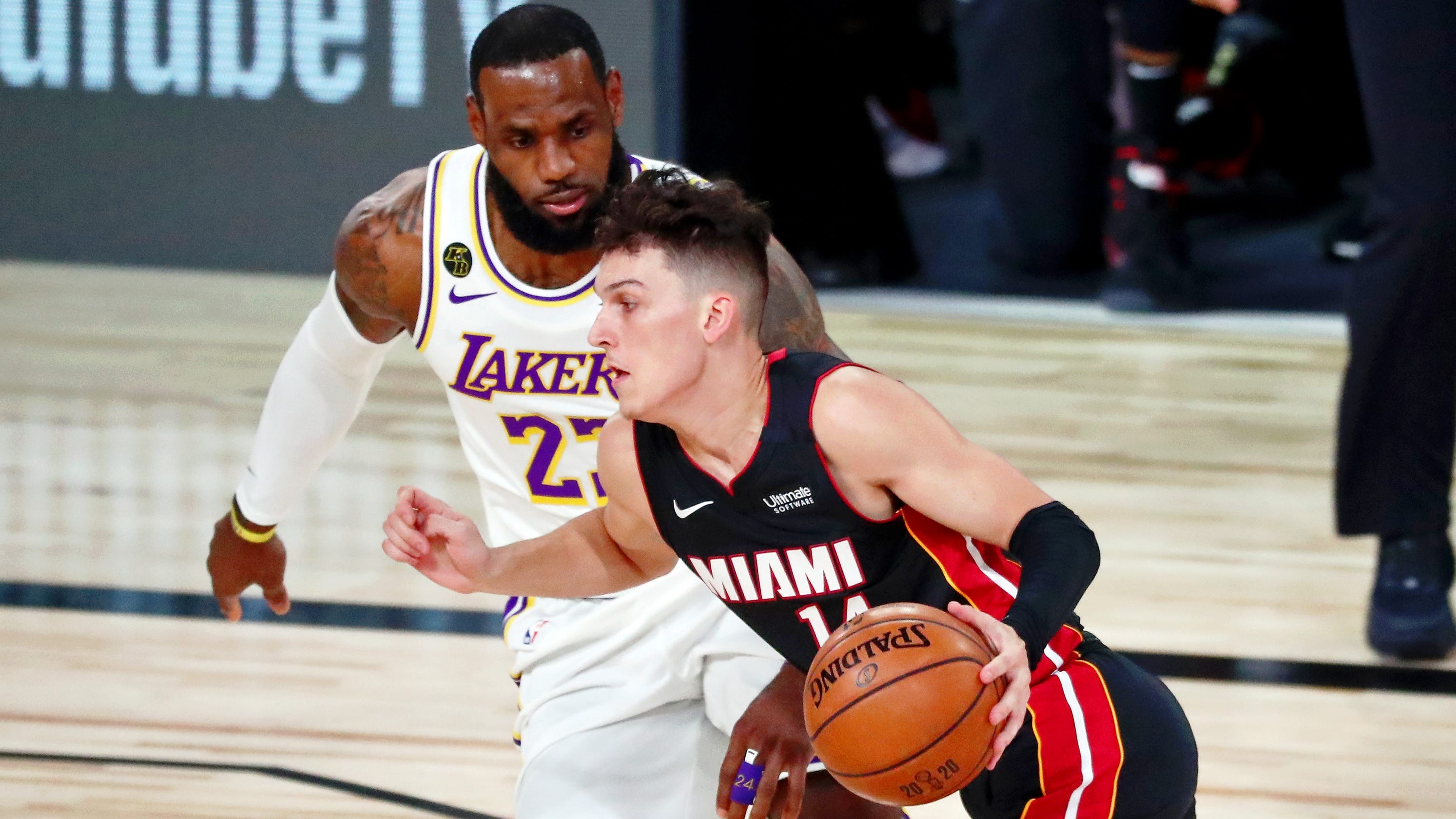 SportsPulse: To the surprise of many, the Miami Heat will not be swept by the Los Angeles Lakers and that’s in large part because of the massive effort by Jimmy Butler in Game 3 who finished with a triple-double.

How should the Los Angeles Lakers assess their 115-104 loss to the Miami Heat in Game 3 of the NBA Finals on Sunday?

Perhaps with a dose of humility after the Heat reduced the series lead to 2-1.

Perhaps with a dose of confidence, too.

Don’t mistake Davis’ words for arrogance or a false sense of security, though.

The Lakers remained upset with themselves for squandering a chance to take a commanding 3-0 series lead while Goran Dragic (foot) and Bam Adebayo (neck) remain sidelined. Instead, the Heat kept hopes of a competitive series alive while buying time for their star players to return.

BIG TALK: Butler backs it up with Finals performance for the ages

BACK IN IT: Butler’s huge triple-double cuts Lakers’ lead to 2-1

But the Lakers also have enough perspective not to overreact. They have lost a game in every playoff series this season. After series-opening losses to Portland and Houston, the Lakers made enough adjustments to dispatch them quickly in five games. Just like the Heat, the Denver Nuggets took Game 3 of the Western Conference Finals. The Lakers still won that series in five games, too.

So while they are not expecting that outcome will play out the same way against Miami, the Lakers have the body of work to suggest they can. The Lakers don’t appear to assume they will win the Finals simply because only four other teams have overcome 2-0 series deficits in Finals history. Instead, the Lakers have the body of work with immediately rectifying losses with productive film sessions and next-game adjustments.

“When you have an opportunity and you don’t make the most of it, then you come back the next time,” Lakers forward LeBron James said. “It’s not like the series was over if we won tonight. We know for sure that Miami is never going to quit, no matter if we won tonight and they go into a Game 4, 3-0. I know how resilient that bunch is and how resilient that coaching staff is. I don’t ever feel like we let our guard down. Also, I don’t feel like we’re concerned. We know we can play a lot better.”

Boy, could the Lakers have played better.

Heat forward Jimmy Butler had a nearly perfect game with a triple double in points (40), assists (13) and rebounds (11) along with strong defense (two steals, two blocks). The Lakers committed 19 turnovers, including 10 in the first quarter. After posting two 30-point performances in Games 1 and 2, Davis finished with only 15 points on nine shot attempts amid struggles with fouls (four) and turnovers (five) while fighting through double teams. Rajon Rondo and Danny Green combined for a 2-of-14 clip from the field and were 0-of-7 from 3-point range.

“I like our fight tonight,” James said, “even as poorly as I believe we played.”

Are the Lakers concerned after dropping Game 3 of the #NBAFinals? Hardly.

“We know we can play a lot better,” LeBron James said. “We have another opportunity to take a commanding lead on Tuesday. So, we relish that opportunity.” pic.twitter.com/iB0ZL00hIc

The reason for that attitude? The Lakers were not complacent. They often tried way too hard to force the issue. And the Heat deserve credit for Butler’s brilliance along with his strong supporting cast in Tyler Herro (17 points), Kelly Olynyk (17), Duncan Robinson (13) and Jae Crowder (12).

Sure, the Lakers conceded they could do a better job with making life tough for Butler. But he is a star player for a reason, and he thrived even amid varying coverages and physicality. That it took that kind of effort for Miami to win shows the Lakers should still be fine so long as they correct everything else that contributed to this loss.

James accepted blame for committing eight of the team’s 19 turnovers. This is the same person who surpassed John Stockton for second place on the NBA’s all-time post-season assist list (1,846). So James knows how to handle the ball and set up the offense. But he forced the issue too many times out of hopes of making a home-run play.

Davis also took responsibility that he allowed three first-half fouls to play “a little passive” as James observed. But after showing in Games 1 and 2 that he could dominate in the post and from the outside, Davis conceded he should have been just as persistent through Miami’s double teams even if the call did not go his way.

“It took away the aggressiveness a little bit,” Davis said. “Still got to be better and still got to find ways to affect the game on both ends of the floor, but it definitely took me out and put a little bit too much pressure on the other guys.”

This performance may have cost Davis his Finals MVP chances, but it appears unlikely this marks a warning sign for his own game. The same can be said for the Lakers.

So even if the Heat come out with a similar strategy, the Lakers likely  will show a better version of themselves in Game 4.