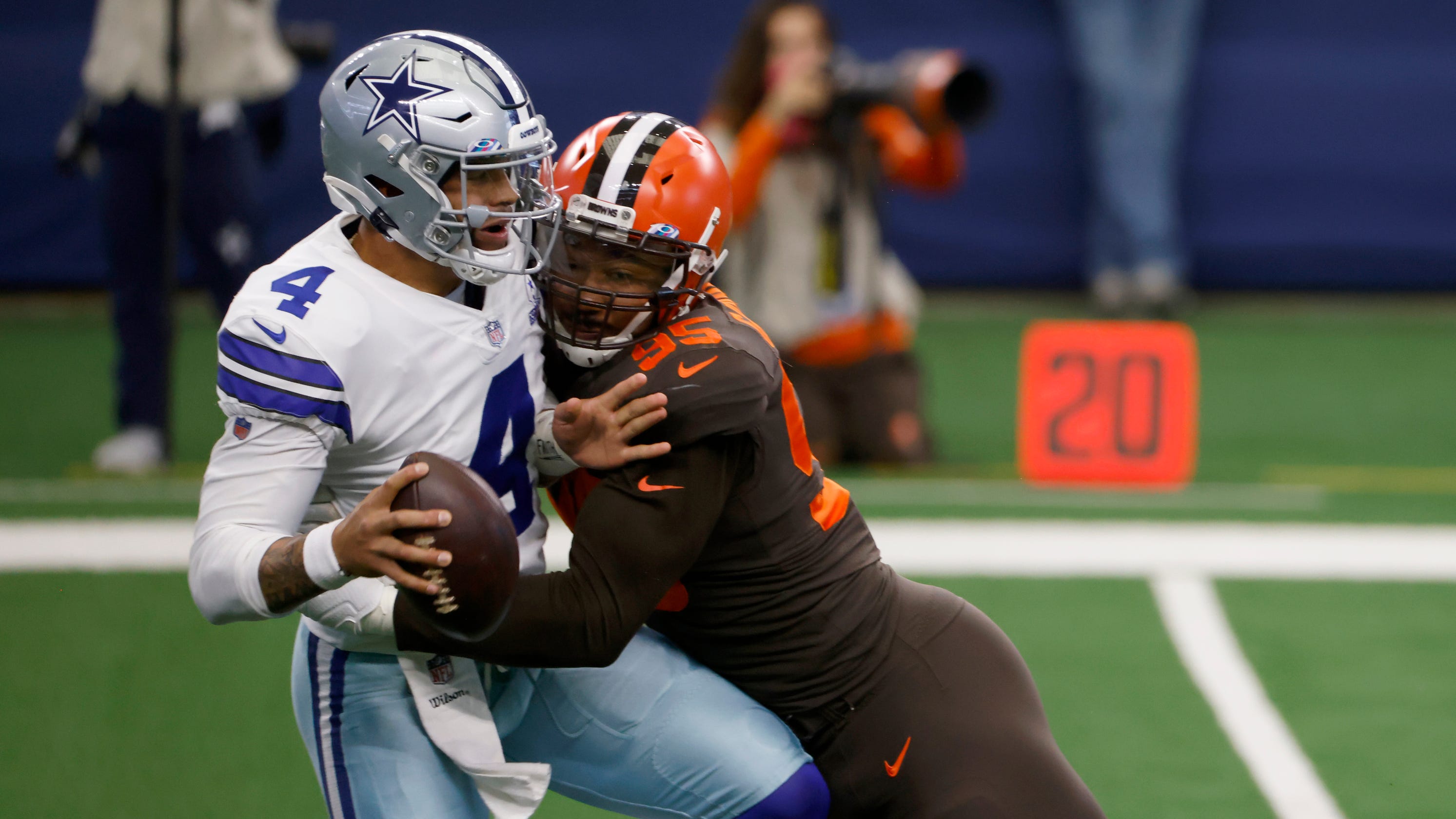 A pattern of historically bad defensive outings, Cowboys opponents scoring at least 38 points in each of the last three games before the Browns’ 49-38 onslaught became the worst allowance yet.

A pattern of turnovers, too, this week courtesy of fumbles on consecutive offensive snaps by quarterback Dak Prescott and running back Ezekiel Elliott. Cleveland scored a touchdown off each, and the Cowboys never regained their lead in more than two quarters left of play.

“This pattern needs to stop,” McCarthy said Sunday afternoon. “That starts with leadership.

OPINION: Believe in the Browns? Under Kevin Stefanski, Cleveland has substance to match swagger

Prescott broke multiple records Sunday in a 502-yard, four-touchdown performance in which he also was strip-sacked and threw a game-sealing interception. The quarterback became the first in NFL history to throw for more than 450 yards in three straight games. His 1,690 yards through four games broke a mark held by Kurt Warner, who in 2000 tossed 1,557.

But “I’d give all those yards back for a different record,” said Prescott, who lost a fumble in a third straight contest behind an injury-riddled offensive line. “I care about one stat, and that’s to win. When we don’t do that, no other stats matter.”

And Prescott takes responsibility for the team’s inability to compile a balanced effort—even as McCarthy says the onus falls on him.

“He’s one of those coaches that it hurts when you lose a game like this,” Prescott said. “It hurts that you let him down. You’re more hurt that you disappoint him, and you’d rather him be mad at you.

“We have to be better executing on the field for him and the rest of the coaches.”

In nine seasons with Jason Garrett as head coach, the Cowboys always won at least two games in their first four contests. Their last 1-3 record dates back to 2010, the year owner Jerry Jones fired then-coach Wade Phillips at midseason.

To the Cowboys’ credit, the team has continued to fight even as it digs holes each week. Dallas has trailed for all but 17:28 of their 240-minute season, or more than 72% of game time. Against the Falcons in Week 2, the Cowboys became the first group in 441 tries to beat an opponent that scored 39 points without committing a turnover, per Elias. They briefly held a 31-30 lead in the fourth quarter in Seattle the following week despite two turnovers propelling Seattle to a 30-15 advantage in the contest. Against Cleveland, Dallas emerged from a 41-14 fourth-quarter hole to narrow the gap to 3 after 24 unanswered fourth-quarter points.

“I don’t trip on how much we go down in the game as long as the clock’s still running,” said receiver Amari Cooper, who posted 134 yards and a touchdown but blamed himself for an incorrect route on the interception that sealed Dallas’ loss. “My thought process is always: Crazier things have happened so we just keep fighting all the way ’til the end.”

But banking on late fourth-quarter plays isn’t a recipe for sustained success, as the results have shown.

“We’re a come-from-behind team as I stand in front of you,” McCarthy said. “That’s not the way you win consistently. That will not be our approach, that’s for sure.”

The Cowboys have two more home games up next, against their NFC East rival Giants next week followed by the Cardinals on “Monday Night Football.” Each unit is taking stock of itself, from Prescott’s acknowledgement his turnovers compromised the defense to defensive end DeMarcus Lawrence insisting his unit has been soft and needs to play “like real men—not kids.”

No health reprieves are expected to come in the near future, right tackle La’el Collins headed for season-ending hip surgery while linebackers Leighton Vander Esch (broken collarbone) and Sean Lee (sports hernia surgery) remain weeks to months away from consideration for activation from injured reserve.

For the time being, Cowboys front office members also dismiss the possibility that they would go outside the organization to help a battered and struggling secondary.

They’ll instead hope McCarthy, with a Super Bowl on his résumé, can provide the team the coaching advantage it hoped to secure when hiring him.

“If ifs and buts were nuts, it’d be Christmas all the time. I get it,” McCarthy said. “The application of the details did not exist today in certain spots of the game. There was a lot of good football that will go unrecognized. That’s what happens with you lose.

“The points are outrageous. The time of possession is totally lopsided. We’re minus-seven in the turnover ratio. That’s not a winning formula.

“It ultimately falls at my feet. It’s my responsibility.”