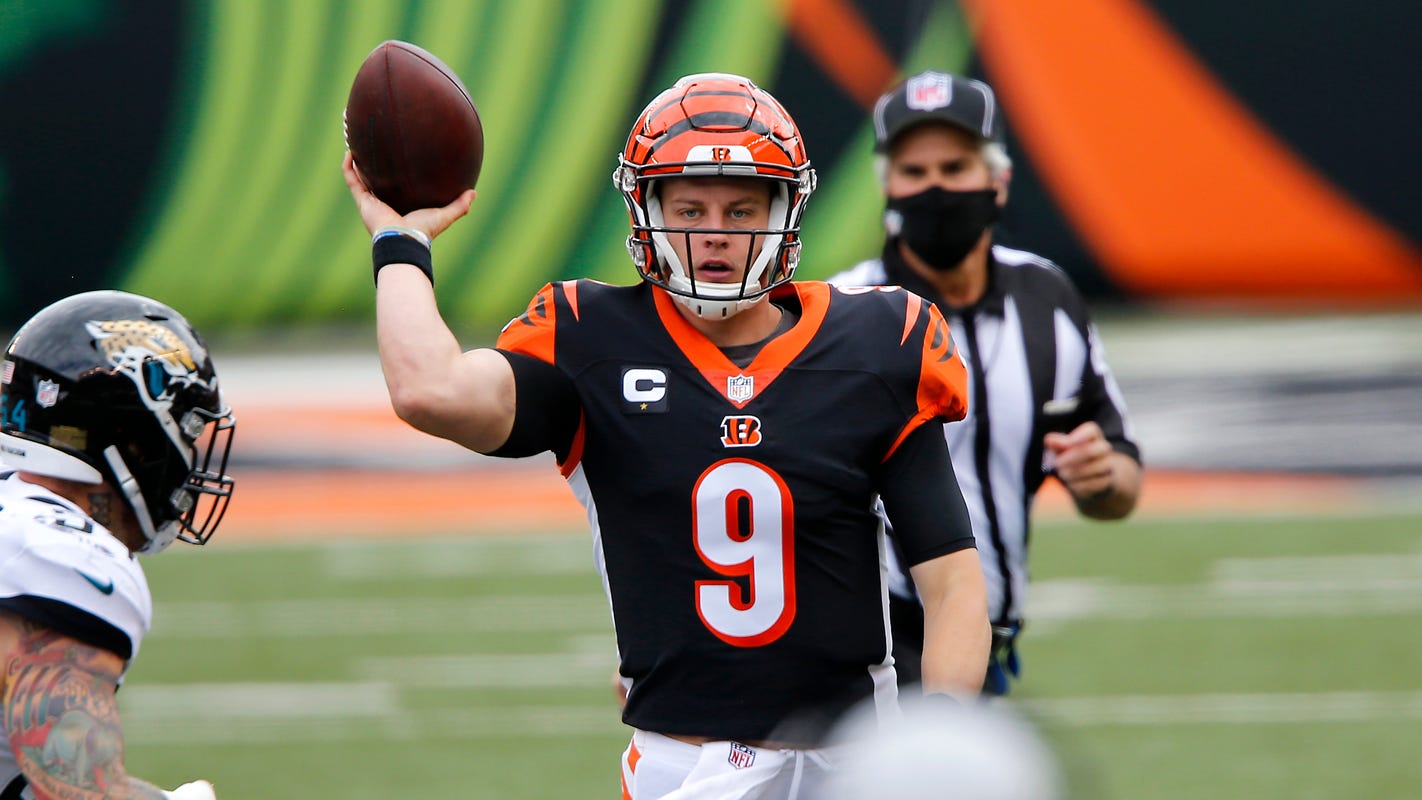 After the Cincinnati Bengals had their longest run of the 2020 season, quarterback Joe Burrow didn’t run to the end-zone to celebrate Joe Mixon’s 34-yard touchdown run in the third quarter.

Burrow sprinted to the middle of the field to hug three of the Bengals offensive linemen who had helped create a path for Mixon.

When the other two offensive linemen stayed on the field to block for the extra point, Burrow waited for them at the front of the sidelines.

Burrow hugged them, too.

Entering Sunday’s game against the Jacksonville Jaguars, Burrow had been sacked more than any other NFL quarterback, and Mixon only averaged 55 rushing yards per game.

They both had more time and more space to make plays in the Bengals 33-25 win over the Jaguars on Sunday at Paul Brown Stadium.

Burrow had 300 yards passing and completed 69.4 percent of his passes, and Mixon finished with a season-high 151 rushing yards and three touchdowns. They led the Bengals to their first win of the season.

It took until the third quarter for the Bengals to execute on an explosive touchdown. With five minutes left in the first quarter, Burrow threw on the run and found wide receiver Tyler Boyd for a contested catch in the back of the end zone, but that play was called back because of a holding penalty on center Trey Hopkins.

Then with nine minutes left in the second quarter, Burrow threw a goal-line pass to tight end Drew Sample. The ball was right on target, but Jaguars linebacker Myles Jack ripped the ball out of Sample’s arms.

Those two plays meant the Bengals left 10 points on the table in the first half. As a result, Jacksonville led the Bengals 13-10 at halftime.

Even though it started raining after halftime, Cincinnati’s offense had its best third quarter of the season. After receiving the kickoff at the start of the third quarter, the Bengals established the run on a five-play, 75-yard touchdown drive.

Mixon and running back Giovani Bernard accounted for all but 12 yards on the scoring drive. With 12:37 left in the third quarter, Mixon ran behind the right side of the Bengals offensive line for a 34-yard touchdown that gave the Bengals their first lead of the second half.

Four minutes later, Mixon followed a great block from right guard Alex Redmond, and Mixon went untouched as he ran up the middle of the field for a 23-yard score.

After the second score, Mixon cupped his hand to his ear as the 6,243 Bengals fans in the crowd shouted, “Who Dey.”

For the first time all season, the Bengals had momentum and fans to celebrate it with.

Mixon’s second touchdown run gave the Bengals a 24-13 lead in the third quarter. Jaguars quarterback Gardner Minshew led two consecutive scoring drives, and the Jaguars eventually cut their deficit down to 8 points with six minutes left in the game.

The Bengals had 66 rushing yards on the following drive to burn the clock, and Randy Bullock made a 30-yard field goal to seal Cincinnati’s first win of the season.

Burrow had more than 300 passing yards for the third consecutive week, becoming the first rookie in NFL history to throw for that many yards in three consecutive games.