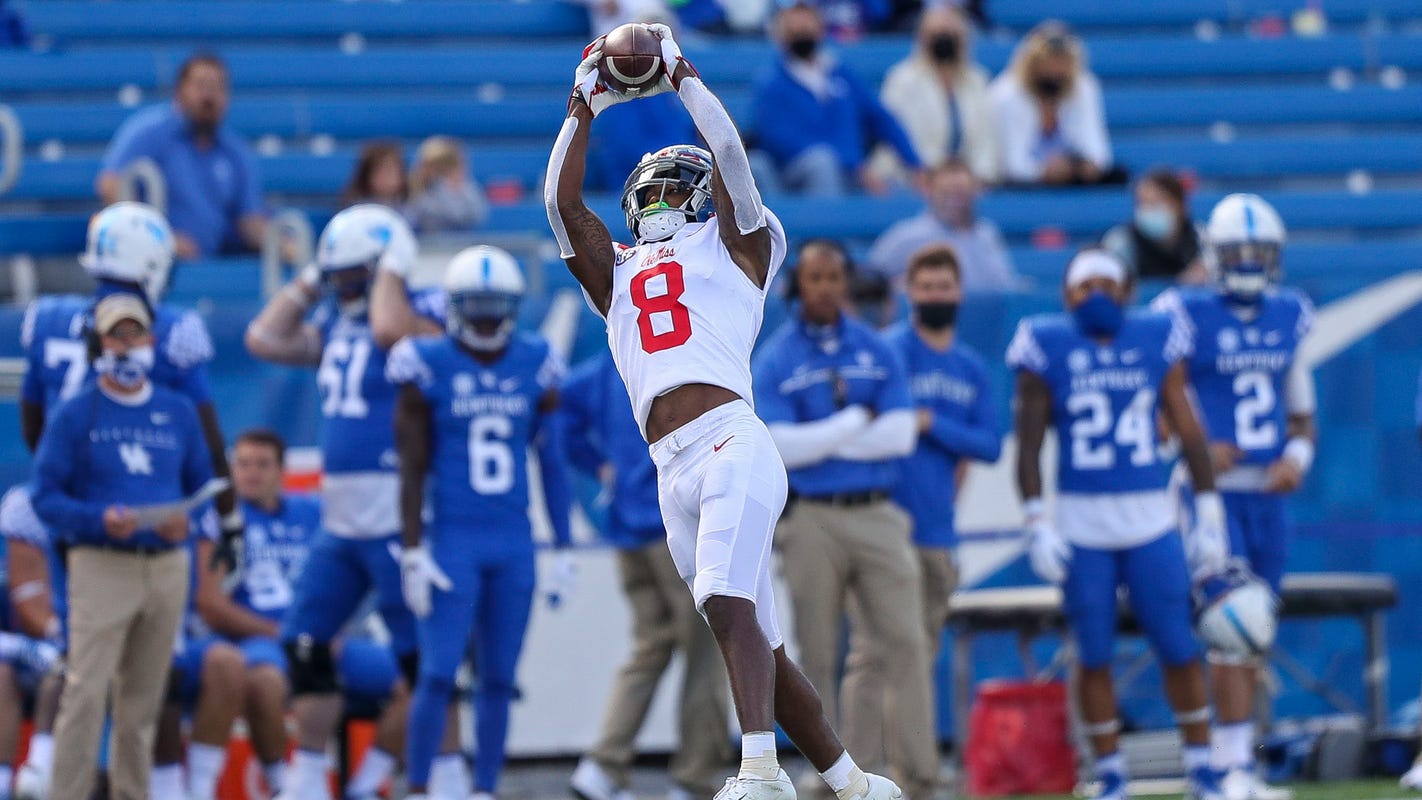 LEXINGTON, Ky. — That’s one way for Lane Kiffin to get his first win as Mississippi’s coach.

The Rebels came back from a 28-14 deficit and won in overtime 42-41 against Kentucky on Saturday and improved to 1-1 on the season.

Ole Miss trailed by as many as 14 points but scored 21 unanswered in the second half to take a 35-28 lead in the fourth quarter. Kentucky responded to the Rebels’ comeback with a 12-play, 75-yard touchdown drive to tie the score with 2:03 remaining.

Quarterback Matt Corral connected with receiver Elijah Moore on 3rd-and-17 to set up a 4th-and-1 with 42 seconds left in regulation. Kiffin sent his offense out to try for the conversion at first but then called timeout after a few seconds and sent out his punt team to play for overtime.

Kentucky got the ball first in overtime and scored a quick touchdown but missed the extra point, setting the Rebels up to win with a touchdown and an extra point of their own.

Ole Miss got down to the 2-yard line in overtime thanks to a Kentucky pass interference in the end zone. Two plays later, Corral found Moore for the game-tying touchdown and then Luke Logan pounded home the extra point to win the game.

It’s hard not to thank the football gods for a missed extra point from Kentucky in overtime if you’re an Ole Miss fan. If that’s not karma for how last year’s Egg Bowl ended, it’s hard to say what is.

But Ole Miss’ offense looked calm and composed with the chance to win in overtime. The big takeaway here is probably the way the Rebels offense fought back from 14 points down in the second half and the fought back from a deficit in overtime. For a team that struggled in close games a year ago, this was a new look for Mississippi.

The Rebels offense looked better on the first possession of the game than any other with a scripted drive and played up-tempo the entire time, gashing Kentucky with eight plays that went for 75 yards and a touchdown in just 2:22. One of the plays was a long gainer, when Corral connected with receiver Jonathan Mingo for 31 yards, but the rest of the plays just across through the field and took advantage of Kentucky’s inability to adjust. When Ole Miss controls the tempo, and doesn’t have to play against a deficit like it did on that drive, the offense looks like it can stack up with anyone.

Last week Ole Miss couldn’t stop this pass. This week, the defense had no answers for the run game. Kentucky slashed and bruised its way through the Ole Miss defense for 220 rushing yards in the first half alone. Quarterback Terry Wilson joined a three-headed attack of running backs A.J. Rose, Chris Rodriguez and Kavosiey Smoke to all average more than seven yards per carry.

After giving up bookend touchdowns at the end of the second quarter and the beginning of the third quarter, the Ole Miss defense stiffened up to make three consecutive stops and allow the offense to come back. Linebacker MoMo Sanogo made a number of key plays across those drives, including a fourth down sack for a turnover. But credit also belongs to cornerback Jamar Richardson who made a sack and a pass breakup on consecutive plays to force a Kentucky field goal attempt that the Wildcats missed.

Kiffin opted against gambling with his offense on 4th-and-2 from near midfield late in the second quarter. He punted and Kentucky scored a touchdown after the punt. Late in the third quarter he kept his offense on the field for a 4th-and-goal that failed from the 1-yard line but Kentucky had poor field position and went 3-and-out as a result.

Naturally, Kiffin’s biggest fourth down decision came with less than a minute remaining. His choice to punt in that situation forced overtime and set up the rest of the game as it played out.