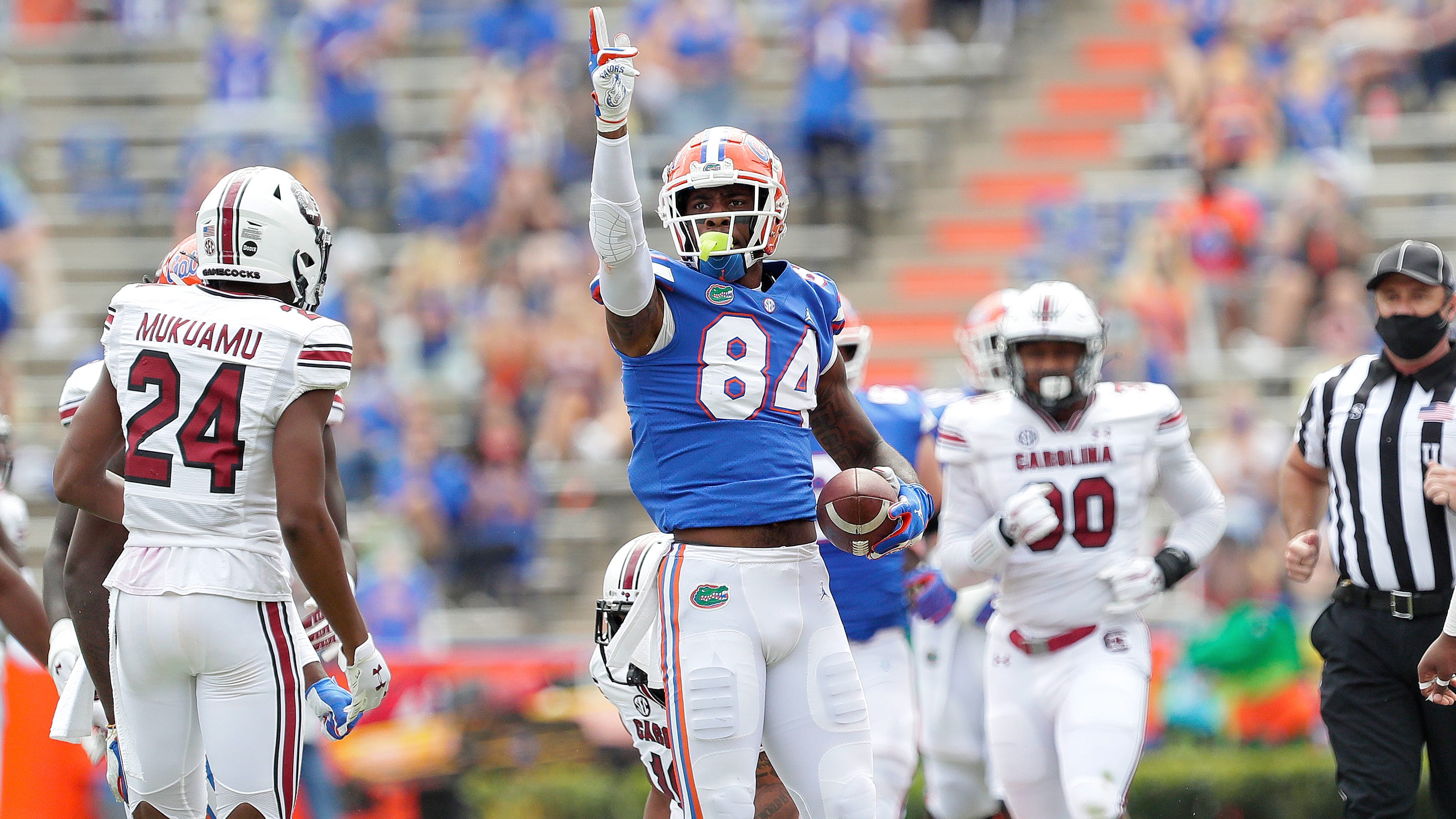 If Florida fans thought they’d feel uncomfortable wearing a face mask all day long in the warm and sunny Swamp, well, that was really nothing. At least compared to how uncomfortable their own team made them feel in what could best be described as a nervous fourth quarter.

In command, leading 38-14 late in the third quarter, the third-ranked Gators had to hang on for a 38-24 win over South Carolina in a game that was closer than what the final score might indicate.

The Gators did not seal the deal until Gamecocks quarterback Collin Hill’s fourth-down pass from the 4-yard line fell incomplete in the end zone with 48 seconds left in the game.

Trask and Pitts did not put up the overwhelming numbers that they did a week ago against Mississippi, but they still proved to be a potent connection again against the Gamecocks. In the first half, the two hooked up for two touchdown passes, giving that combination six scores in two games. Pitts also set up Florida’s first touchdown of the game with a 20-yard reception along the sideline.

To South Carolina’s credit, they disconnected Kyle-to-Kyle in the second half, shutting down Pitts, whose four catches for 57 yards all came in the first half.

With No. 2 quarterback Emory Jones out for unspecified reasons, it appeared the Gators would not have a running threat at quarterback Saturday. That seemed a certainty when Trask, on his first designed quarterback run of the game, lost a fumble near midfield that led to a South Carolina touchdown in the second quarter.

But Trask would give it another try late in the first half with a much different result. On an option play, two Gamecocks defenders focused on the pitch man and Trask cut it up field and dashed 19 yards for a first down. Two plays later, he threw his second TD pass to Pitts to give the Gators a 24-14 lead.

After giving up a 75-yard touchdown drive that lasted almost seven minutes on the game’s opening possession, it looked like the Florida’s defense might be in for a long day of shredding again for the second week in a row.

But the Gators righted themselves and were much more sound for the rest of the first half and for most of the third quarter.

In the fourth quarter, the defensive players found themselves hanging on because the offense did nothing and the defense was on the field almost the entire quarter. The Gators ran only eight plays in the quarter — three coming on kneel downs in the final seconds — and had just nine total yards.

was a key part of the downfield passing game. He had one of the biggest plays of the game Saturday, caching a pass over the middle and racing for a 57-yard touchdown in the third quarter that gave the Gators a 38-14 lead.

With opposing defenses focusing on trying to contain Pitts, opportunities have been there for some other receivers to make plays. Two young guys — redshirt freshman Trent Whittemore and true freshman Xzavier Henderson  — did just that Saturday.

Whittemore caught a 21-yard pass that set up a first-quarter touchdown, then he caught a four-yard touchdown pass in the third quarter.

Henderson, one of the fastest players on the team, had a 23-yard reception that set up a touchdown and drew a pass interference deep down the field that set up another.