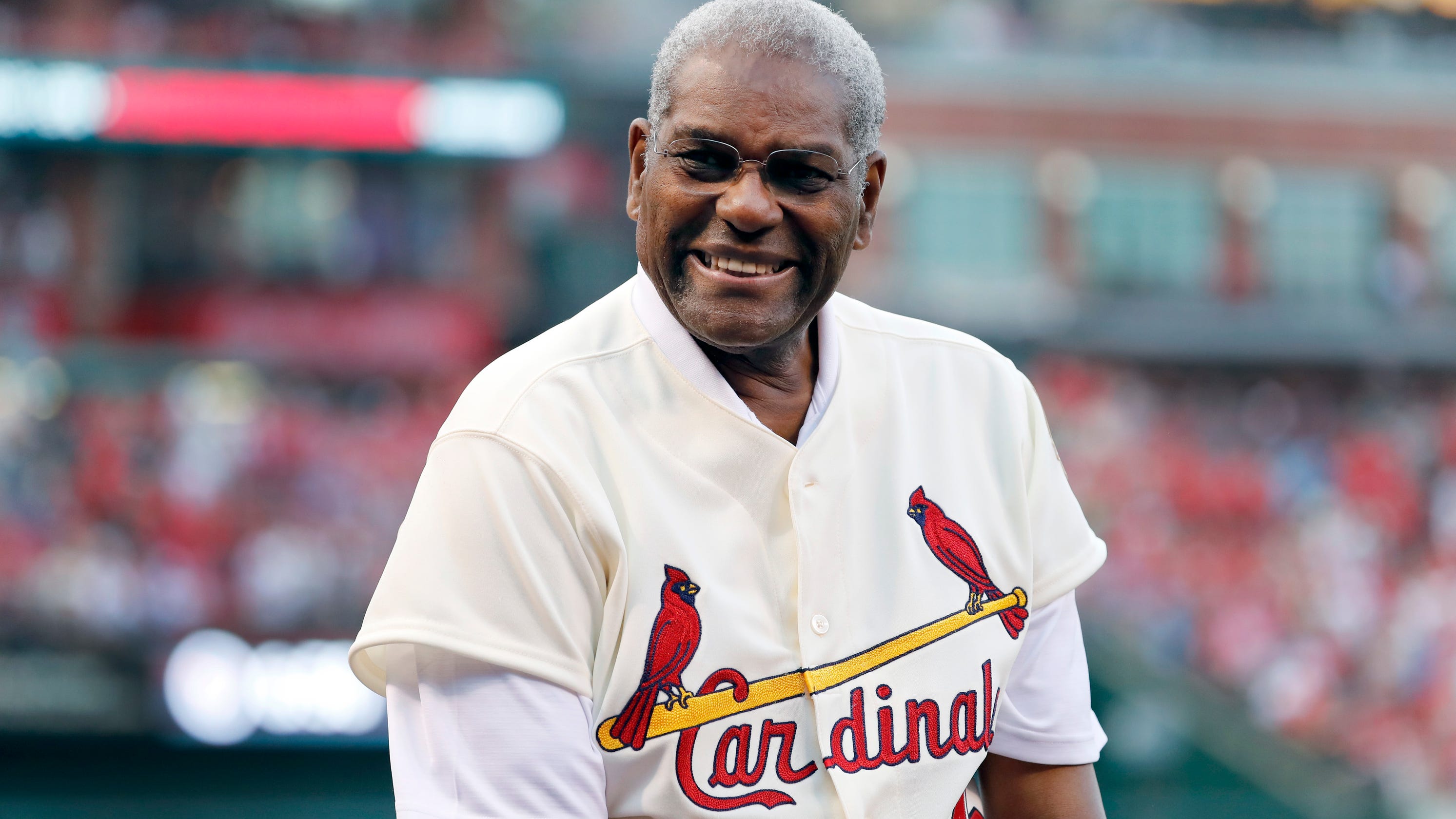 There he was a few years ago, sitting all alone on a couch, at the Otesaga Hotel in Cooperstown, N.Y., during the annual Baseball Hall of Fame induction weekend.

There were other Hall of Famers milling around the lobby, chatting with one another, laughing and telling stories, but Bob Gibson was all alone.

Finally, after several minutes, I mustered up the courage to walk over. I introduced myself, sat down, and for the next 20 minutes, helped learn what made Gibson perhaps the fiercest competitor in baseball history.

“So why are you sitting here alone, Mr. Gibson?’’ I asked.

“Son, you’ve got to remember, I pitched against a lot of these guys,” Gibson said. “They were not my friends when I played. I hated them. And they hated me.

Gibson laughed, knowing that a whole lot of the same Hall of Famers may still have physical scars from the days Gibson knocked them down, or emotional bruises from being humiliated at the plate, but there’s not a soul who put on a uniform that didn’t have the ultimate respect for the man.

That’s why Gibson’s closest friends were still in an utter state of disbelief, after hearing the news that Gibson died Friday at the age of 84, after battling pancreatic cancer for the past year.

Sure, they were informed that Gibson went into hospice a week ago, and this day was inevitable, but still, this was Bob Gibson. If anyone was going to beat cancer, it was Gibson, the toughest man they know.

“What he meant to me, what he meant to so many people,’’ St. Louis Cardinals broadcaster Mike Claiborne, said, “how he carried himself as a real man in every sense of the word, I can’t put in words. It’s still so tough to belief. You think you’re prepared for this day, but you’re not.

“People aren’t doing well at all today in St. Louis.’’

Really, the only way to help alleviate the pain was to tell their favorite stories about Gibson.

Houston Astros manager Dusty Baker remembers the time he was at an Atlanta nightclub his rookie year with teammates Hank Aaron and Ralph Garr, and there were Gibson and Lou Brock. Baker, who brought along his wife, was introduced to Gibson, who had just pitched a 1-0 shutout.

“I was mad. I said, ‘Whoa, nobody talks to me like that in front of my wife. But just when I was thinking of fighting him, I remembered that Hank told me that he was a Golden Gloves boxer, too.

Gibson in 2017 during a ceremony honoring the 50th anniversary of the Cardinals’ 1967 World Series team. (Photo: Jeff Roberson, AP)

They had a few more confrontations on the field during Baker’s career, but after both had retired as players – with Baker managing the San Francisco Giants – Baker walked into Mike Shannon’s restaurant in downtown St. Louis and reluctantly went over to say hello to Gibson.

Shannon, one of Gibson’s closest friends, teased him in front of Baker, and asked why he had to act that way the first time he met Baker that evening.

Gibson looked at Baker, and said, “Yeah, but wasn’t I nice to your wife?’’

“He was the only man,’’ Baker said, “who ever intimidated me besides my dad.’’

“‘Don’t dig in against Bob Gibson, he’ll knock you down. Don’t stare at him. Don’t smile at him. Don’t talk to him. If you happen to hit a home run, don’t run too slow. Don’t run too fast. And if you want to celebrate, get in that tunnel first.’’

There was the time playing the Padres in San Diego when Lou Brock, who died three weeks ago, was hit by a pitch. Brock started laughing as he walked to first, and the Padres first baseman asked what was so funny.

“Ya’ll forgot who we got pitching tomorrow,’’ Brock said.

The next day, home plate umpire Lee Weyer, aware of the trouble coming, warned Gibson before he took the mound and said there would be $50 fines if he retaliated by hitting players.

Gibson drilled the first two Padres batters, induced a double play, struck out the next batter to end the inning and glared at the Padres’ dugout.

The Padres never intentionally threw at another Cardinals player as long as Gibson was in uniform.

It didn’t matter who you were, whether a Hall of Famer or bench player, if you were on the opposing team, Gibson didn’t like you.

Richie Allen remembers playing for the Philadelphia Phillies, and with the Cardinals in town on an off-day, Allen invited him over to the house for dinner, and let him use his car to return to the hotel.

The next day, Gibson faced the Phillies, and, yes, he drilled Allen.

Allen went to first base, holding his side, and screaming at Gibson, asking him how he could possibly do that after a lovely night at his home.

“Gibson was so mean,’’ Allen said, “he’d knock you down and then meet you at home plate to see if you wanted to make something of it.’’

Gibson’s competitiveness was legendary, even after he retired from baseball, and pitched in the Cardinals’ fantasy camps.

“He’s the only guy I know who ever hit a guy in fantasy camp,’’ Claiborne says. “There was this guy yukking it up the night before, so Bob wanted to do something about it. The next day, he comes to the plate, Bob hits him in the ribs, and broke his ribs.’’

It was the guy’s last day in camp.

“I remember going through the Omaha airport years ago,’’ Baker said, “and I told Melissa [his wife], this is the home of Bob Gibson. Man, he was nasty. We didn’t get along at all. Well, the waitress came over, and sent us a few drinks, courtesy of a man over there.

“It was Gibson. We talked for a while, and Melissa says, ‘What were you talking about? He’s such a nice man.’ I said, ‘Baby, that’s because you had never had to face him.’ “

And there was the time Jim Ray Hart of the San Francisco Giants started digging into the plate against Gibson, only for Gibson to yell at him. “Keep digging, because that’s about to become your grave.’’

“The next thing I knew,’’ Hart one said, “there was a loud crack. My left shoulder was broken.’’

“Everyone always asked me why Gibson always pitched mad,’’ Claiborne said. “I tell them, ‘Well, he had a lot of reasons to be mad.’ “

In Gibson’s 1968 book, “From Ghetto to Glory,’’ he wrote: “In a world filled with hate, prejudice and protest, I find that I too am filled with hate, prejudice and protest. I hate phonies. I am prejudiced against all those who have contempt for me because my face is black and all those who accept me only because of my ability to throw a baseball. I am not proud of that ability. It is not something I earned or acquired or bought. It is a gift.”

Gibson was a nine-time All-Star, two-time Cy Young winner, two-time World Series MVP, and five-time 20-game winner. He spent his entire 17-year career with the Cardinals, going 251-174 with a staggering 255 complete games, 56 shutouts and 3,117 strikeouts. In 1968, he started 34 games and finished 28 of them, setting a modern-day record with a 1.12 ERA, and 13 shutouts. He started nine World Series games, and pitched a complete game in eight of them with two shutouts, going 7-2 with a 1.89 ERA and 92 strikeouts in 81 innings.

He died on the 52-year anniversary of his greatest World Series performance, striking out a record 17 batters in a 4-0 shutout victory in Game 1 the 1968 World Series against the Detroit Tigers.

There was no pitcher more feared than Gibson, who wore glasses away from the field, with his eyesight barely good enough to see only 60 feet, 6 inches.

“Man, you wear glasses?’’ Mays told him, according to White. “You’re going to kill somebody one day.’’

Mays made sure to warn his teammates the next day about Gibson’s poor eyesight, and to be careful, making Gibson even more scary – if that was humanely possible.

But while Gibson may have intimidated everyone not wearing a Cardinals uniform, even hitting White after he was traded to Philadelphia, his former teammates will tell you there was never a more loyal friend.

He was a brilliant, witty man, and a ferocious reader. He played the guitar. He was a wine connoisseur. And, of course, he loved his Cardinals.

When Cardinals ace Jack Flaherty was a rookie, Gibson asked Claiborne if he could introduce him. Gibson sat him down, talked for 15 minutes, gave Flaherty his cell phone number and email, and told him to call anytime. He was there for Flaherty, confident the young right-hander would become a star.

When Flaherty walked off the field Friday night after his brilliant performance against the San Diego Padres in their wild-card loss, and was told after the game that Gibson had died, he couldn’t help but shed tears.

“That one hurts,” Flaherty said. “He’s a legend, first and foremost, somebody who I was lucky enough to learn from. You don’t get the opportunity to learn from somebody of that caliber and somebody who was that good very often.

“I had been kept up on his health and where he was at. I was really hoping it wasn’t going to be today. I was going to wear his jersey today to the field but decided against it.’’

We throw round the word, “legend’’ far too often in sports, but in Gibson’s case, he was more than a legend. He was an inspiration. He was an icon. He personified eminence.

There was only one Bob Gibson, and of all the times I’ve been to Cooperstown, sitting on a couch and talking to the man, was a moment I’ll cherish forever.