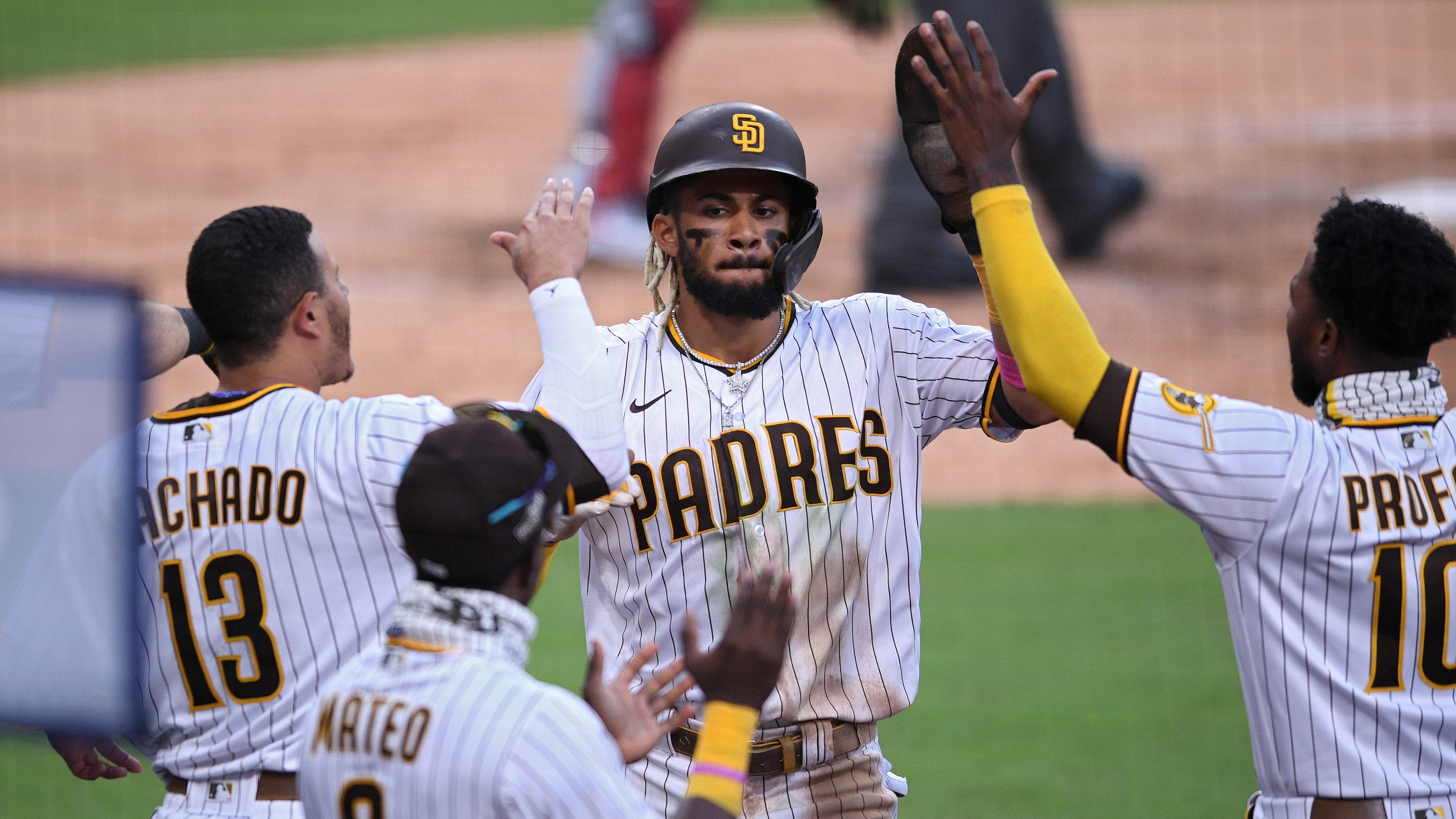 Padres shut out Cardinals, advance to NLDS vs. Dodgers

You want entertainment? You want sheer, unadulterated emotion? You want the wildest, bat-flipping-est and charismatic team in baseball?

The Padres, winners of their first postseason series since 1998 with a 4-0 victory over the St. Louis Cardinals, are about to be introduced to a much wider audience, playing the Los Angeles Dodgers in the National League Division Series.

“I remember in 2017 trying to change the culture and building this organization into a winner,’’ said veteran Craig Stammen, who made his first start in 10 years. “Here we are. We’re trying to write our own piece of history.’’

Well, in this series, they actually made baseball history.

One night after becoming the first postseason team to hit five homers in the sixth inning or later, they became the first team in playoff history to employ nine pitchers in a shutout.

And no team had ever used at least eight pitchers in three consecutive postseason games.

YANKEES: New York has what it takes to end title drought

Think about this: The Padres’ starting rotation lasted a total of only six innings the entire series, leaving the bullpen to cover the remaining 21 innings.

“It’s probably one of the best performances from a bullpen I’ve ever seen,’’ said Padres first baseman Eric Hosmer, the only player on the Padres who has won a World Series title. “It was incredible.’’

The Padres aren’t about to apologize for their strategy, using 26 pitchers – eight in Game 1, nine in Game 2 and nine Friday – to cover 27 innings, their unbridled emotion, and certainly not for the bat flips.

The Padres paraded around the field after the game, posed for pictures on the mound and saluted the employees and family members who were cheering in the stands, as Aretha Franklin’s “RESPECT,’’ blared on the loudspeakers.

This is who they are, and they’re not about to change for anyone.

“We play the game right. Play it with energy. Have a ton of fun. Play it with passion. These are all plus-plus qualities in the game. We value those things. That’s great. We want people to be themselves. That’s where we’re at.

“Whatever people say, we’re going to have critics. That’s fine. We’re pretty comfortable with who we are.’’

And the Padres fear no one. They are taking their bravado now to the heart of Texas where they will play the Los Angeles Dodgers, their version of the Evil Empire, in the NL Division Series.

“We stack up great,’’ said Hosmer, whose team lost six of the 10 games against the Dodgers during the regular season. “We know we need to get through these guys to get to where we want to be, and that’s a world champion.

“We got to play our best baseball to beat those guys, and were going to come out, play with energy, and confidence that we can get through these guys.”

And the Padres may be arriving with reinforcements.

Their top two starters, Mike Clevinger (right elbow impingement) and starter Dinelson Lamet (right biceps tightness), missed the Cardinals series, but the Padres are cautiously optimistic that at least Clevinger will be on their NL Division Series playoff roster.

“Our group is extremely tough,’’ Tingler said. “We are battled tested. We can take shots. We can throw shots back. I’m proud of our toughness and proud of what we continue to do.

“We know there’s more work to do. This is a step towards our ultimate goal. And now we have opportunity to get there.’’

Tingler wants all of his players to remember this moment forever, a time the franchise was reborn, becoming a winner after nine consecutive losing seasons.

He planned to take a good look at the fans waiting outside the ballpark, celebrating the Padres’ greatest victory in more than two decades.

Why, the last time the Padres won a postseason series was October 1998.

“It’s amazing because of the times we’re in, and how things have shaken out,’’ said Padres catcher Austin Nola, who was acquired from the Seattle Mariners at the trade deadline. “To see the support from the fans under these circumstances are amazing.

“I didn’t know baseball was that big in Southern California.’’

And for the Padres, after being eliminated by the Cardinals in the 2005 and 2006 NLDS, it was particularly rewarding.

“We have so much respect for those guys,’’ Hosmer said, “and what they went through.’

The Cardinals had to play 53 games in 44 days to to finish the season after a COVID-19 outbreak that sidelined 18 players and staff members. Still, they made the playoffs, won Game 1, and felt rejuvenated and confident.

Maybe it was a false sense of security, because they spent the entire season playing only the NL Central and AL Central teams, which were badly exposed in the postseason. All seven AL-NL Central teams who reached the playoffs were eliminated in the first round, going just 2-14. The NL Central teams, outside of the Cardinals, scored a total of three runs in 58 innings.

It’s a little tough to do bat flips when you can’t homer.

These swaggering Padres have rubbed some the wrong way, but many around baseball have come to understand that we’re in a new era.

Padres veteran Mitch Moreland, who was on that Texas Rangers team that went ballistic when Toronto Blue Jays slugger Jose Bautista wildly flipped his bat in the 2015 playoffs, says everybody is starting to get with the times.

“It’s a different type of entertainment. It seems like it’s happening more and more all around the league,” Moreland said. “It’s just the new baseball.”

Indeed, a new baseball that these Padres are helping bring to the national stage.