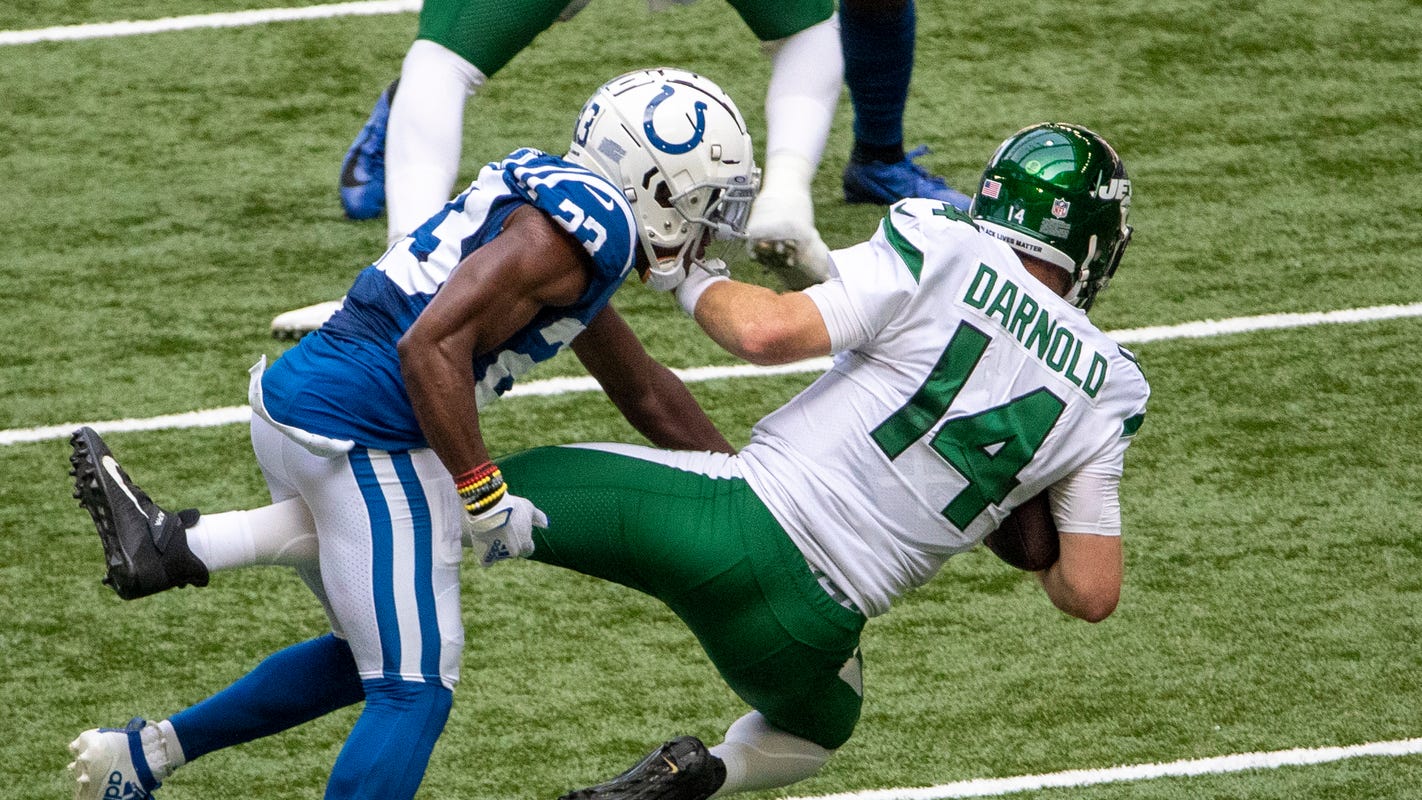 INDIANAPOLIS — They’re different, these Indianapolis Colts. They’re violent. They’re nasty. They’re unlike any Colts team since 2014, teams that had identities of their own, but never one like this.

It’s beautiful, is what it is.

There’s a reason Colts fans have fallen in love with Quenton Nelson, and it’s not because he played up the road at Notre Dame. It’s because he’s a nimble brute, playing as hard as he can within the rules, turning a Sunday game of football into three hours of physical and mental warfare. I’d compare Quenton to water dripping steadily on a rock, relentless and unforgiving until he’s broken the thing open, but he’s more like a 6-5, 330-pound monsoon.

This team has a whole lot of Quenton Nelsons, and it’s not just the brutes up front, though I’ve seen the rest of the offensive line drive the entire Minnesota Vikings’ defensive front all the way to the sideline. It’s the little guys, too. It’s the fastest receiver, Parris Campbell, and the smallest safety, Julian Blackmon. It’s that angry little pit bull of a cornerback, Kenny Moore.

Entering their game Sunday at the undefeated Chicago Bears, the Colts often seem torn between getting inside their opponent’s head, or tearing it off. Near as I can tell, they’ve come to this decision:

Even the quarterback is a piece of work.

Don’t be fooled by the way Philip Rivers can “dang” and “golly” his way through a news conference. Other teams don’t like him. Other fans don’t like him. You know this, Colts fans. Once upon a time, you didn’t like him either.

It’s because Rivers does stuff like what he did against Minnesota on Sept. 20, when an incompletion to T.Y. Hilton was nullified by illegal contact against Vikings cornerback Holton Hill, who had his hands on Hilton before the ball was in the air. Rivers let Hill know about it, the two of them jawing until a referee broke it up.

Next play — very next play, you can’t make this up — Rivers leaves the pocket for the sideline. Holton Hill of all people is in pursuit, but as Rivers lowers his shoulder, Hill peels away and lets him go out of bounds. Rivers jaws at him some more, mad at Hill for not hitting him.

Compare that to previous Colts quarterback Andrew Luck. We loved Andrew around here for a lot of reasons, including his goofy side. He was once mic’d up by NFL Network, who posted a video under the title: “How to be a polite quarterback.” It was soundbite (“Nice hit, big man”) after soundbite (“Hey, nice hit buddy”) of Luck complimenting the defenders (“Ooh, nice hit man!”).

Andrew Luck was a Boy Scout, someone you’d want by your side if you were lost in the woods. Philip Rivers? Nice guy, but if you were in the woods with him and only one of you was getting out, it wouldn’t be you.

It was another Colts offensive skill player who set the tone for the season, though. Remember that first game, at Jacksonville? Speedy receiver Parris Campbell gets the ball on an end-around and is blasted near the sideline by Jaguars linebacker Myles Jack. It’s a borderline late hit, but Jack gets away with it … so to speak. Campbell stayed in Jack’s face and flexed his arms, drawing a penalty but sending a message: Nobody’s punking us.

While we’re with the offense, while we’re talking about receivers, let’s note that the Colts have gone from typically having a tiny wideout corps to having monsters like Michael Pittman (6-4, 223), Dezmon Patmon (6-4, 225), Zach Pascal (6-2, 214) and Daurice Fountain (6-2, 210). Pascal is particularly physical, a pulling offensive tackle with a wide receiver’s hands.

And don’t get me started on the tight end. Used to be, the Colts’ No. 1 target at tight end was a fleet, finesse guy like Coby Fleener or Eric Ebron. Fleener fancied himself a receiver, but Ebron and his alligator arms were particularly galling. Ebron loved him some Ebron, which means he wanted nothing to do with violence. A guy could get hurt!

The players the Colts have now at tight end, Jack Doyle and Moose I mean Mo Alie-Cox? Violent men right there. Alie-Cox is a rising star with speed and hands, a former basketball player you’d think would play on the genteel side, but all he wants to do is hit somebody . Remember that long catch Sunday against the Jets? Alie-Cox was running alone for so long that he got confused, and went looking for someone to hit. Two Jets were in the vicinity 45 yards down the field, and Alie-Cox couldn’t make up his mind. So he hit both.

Not so long ago, the toughest player on the Colts was punter Pat McAfee.

Before he became a WWE professional wrestler, McAfee would use that boomstick of his to punt it 50 yards and go looking for someone to hit. You remember what he did in 2013 to Trindon Holliday when Denver’s punt returner had the gall to return one 56 yards. The linebacker-sized McAfee (6-1, 240) chased Holliday down near the sideline and sent him flying, a replay they’ve shown for years at Lucas Oil Stadium, one that always gets the crowd going bonkers.

Because we love controlled violence.

Now the toughest player on the Colts is the left guard, Quenton Nelson. Unless it’s Khari Willis, a heat-seeking missile of a safety. Or Kenny Moore, who goes 5-9 and 190 pounds and hits running backs and blitzes quarterbacks and is someone 6-5, 313-pound Kansas City Chiefs tackle Cam Erving will forever see in his nightmares.

The Colts secondary, once a place full of softness and pliability and Vontae Davis, now has T.J. Carrie facing down Jets running back Kalen Ballage in the open field. Ballage is huge at 6-2 and 231 pounds, but as the 6-0, 204-pound Carrie crouches for the tackle and Ballage tries to jump over him, Carrie rises and flips Ballage upside down. Now he’s standing over Ballage, much as Parris Campbell stood over Myles Jack in the opener, suggesting he not make that mistake again.

Same thing happened the previous week, when 6-0, 187-pound safety Julian Blackmon dumped Vikings running back Alexander Mattison onto his head, sending him slowly off the field.

It’s everyone, everywhere, and maybe this is Frank Reich’s doing. Don’t let the former Presbyterian pastor’s previous occupation fool you; he employs a guerrilla warfare brand of football. Everything he does is designed to impose the Colts’ will on the other team, whether it’s constantly going for it on fourth down — even when it doesn’t work — or having Rigoberto Sanchez launch those kickoffs to the 1-yard line, because he wants the Colts to use the most violent play in football to send a message, as they did repeatedly on Sunday against the Jets.

Also Sunday, Reich unveiled the punt-return tandem of running back Nyheim Hines, who was an All-American sprinter at North Carolina State, and cornerback Isaiah Rodgers, who’s even faster (4.28 seconds in the 40). That was Reich getting in the heads of the Jets, and everyone still to come on the Colts’ 2020 schedule.

Once upon a time, the Colts were just the nicest team ever. Also, they were soft.

These Colts, they’re nice enough in the locker room. But God help you in the open field.