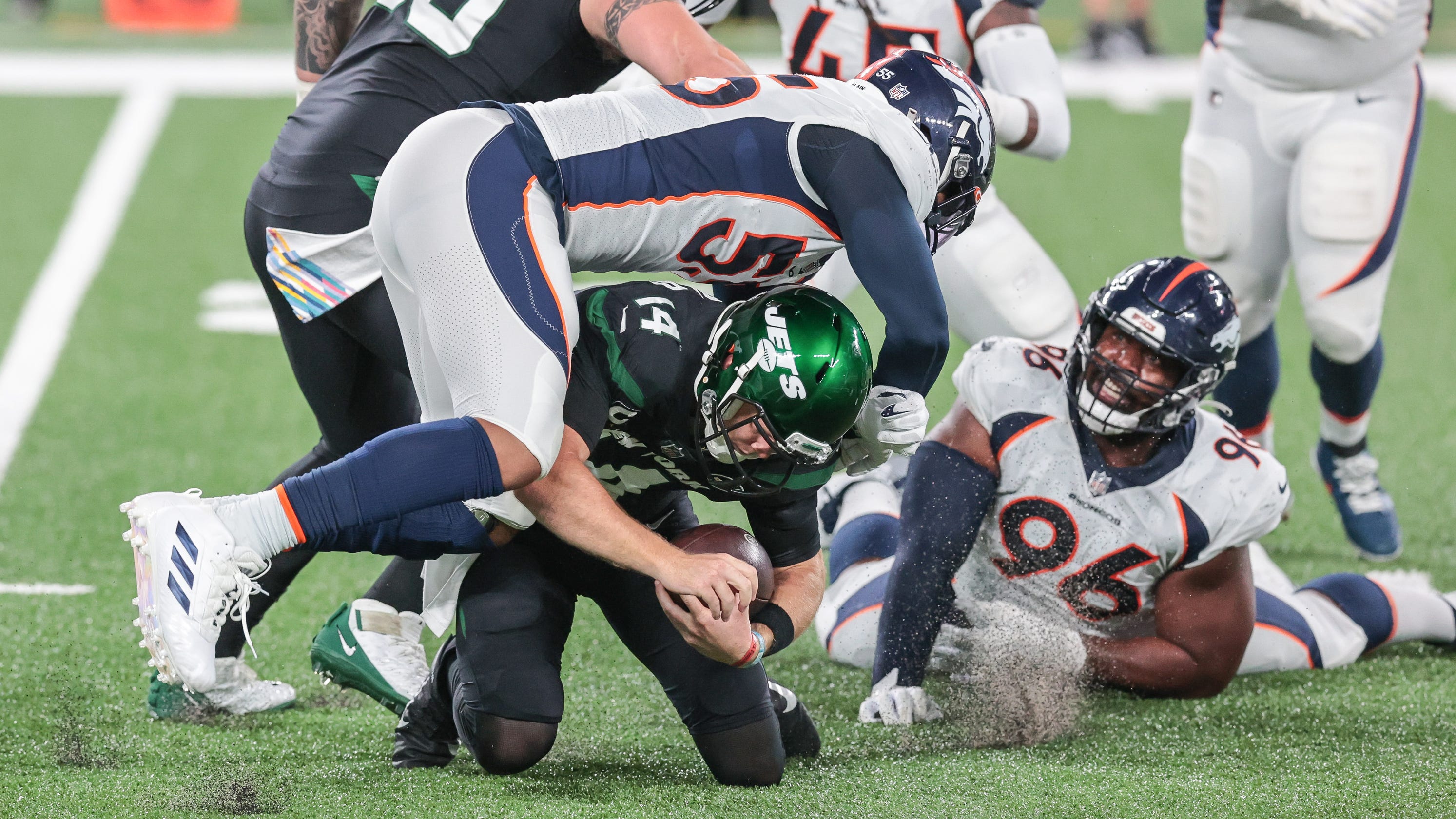 EAST RUTHERFORD, N.J. — The New York Jets put themselves in position to stop all the negativity on Thursday night. They had the lead in the fourth quarter, and a chance to get that elusive first win of the season.

Then they imploded. And there’s a whole lot of blame to go around, starting with head coach Adam Gase — who now appears to be a dead coach walking.

The Broncos beat the Jets 37-28 at MetLife Stadium in a strangely thrilling, but difficult-to-watch game.

Sam Darnold returned after a seemingly devastating injury, but couldn’t do enough to beat a depleted Broncos team. The Jets defense was an absolute disaster, making terrible mistakes in coverage and committing crushing penalties — including the most costly of all: Quinnen Williams’ fourth-quarter personal foul that was the wrong type of game-changer.

And the offense was absolutely miserable where it mattered most, in the red zone, as the Jets never came close to scoring on any of their red zone possessions.

It was a disaster. But it was total team effort, which was fitting of this Jets team.

It was a wild game, from the get-go. But things got especially crazy in the fourth quarter, starting with a pick-six from Pierre Desir that gave the Jets hope. Desir was an absolute disaster for most of the game, but his 35-yard touchdown return narrowed the gap to 27-25 with 10:56 left in the game.

And then Brian Poole set the Jets up to take command of the game with another interception with 8:37 remaining, giving the offense the ball at the 44 with 8:37 remaining. A touchdown would have been huge. Instead, they had to settle for a field goal after the drive stalled. But they had taken a 28-27 with 6:23 left, their first lead since the first quarter.

All they needed was a big stop from the defense. And that’s exactly what they got when Williams sacked Rypien with about five minutes left. It should have forced the Broncos to punt deep from their own territory, but Williams was called for a facemask on the play. And suddenly the Broncos had life, and they made they most of it.

Broncos kicker Brandon McManus drilled a 53-yard field goal with 3:08 remaining to give Denver a 30-28 lead. The Jets turned the ball over on downs at midfield just before the two-minute warning, but they still had three timeouts. And then the defense did the one thing it couldn’t do: give up a 43-yard touchdown run to Melvin Gordon on first down.

It was a brutal end for the Jets: but it showed exactly what is wrong with this team: Everything.

And now it’s hard to imagine how or when this team gets a win.

The Jets were the NFL’s worst red zone team heading into this game. And they looked like it all night, as they failed to convert any of the three trips inside the 20 into a touchdown.

Honestly, it’s hard to choose which possession was the worst, because they were all bad, but we’ll go with the one in the third quarter.

The Jets arrived at the 20-yard line on their first possession of the second half, after receiver Jeff Smith drew a long pass interference penalty on a deep ball. And then this is what the Jets did: handed the ball off to 37-year-old Frank Gore twice, and targeted him as the primary option on a pass out of the backfield.

Yes, the Jets are short on weapons. But this is inexcusable, and it’s on Gase. Why not get Jamison Crowder involved? He is the Jets’ best receiver. But instead on the last drive of the second quarter, they focused on trying to get the ball to Chris Hogan on fade passes — not his strength, even when he was at the top of his game with the Patriots. And then they tried to get the ball to Gore, the league’s oldest running back.

Meanwhile, fourth-round pick La’Mical Perine is sitting on the bench. He has explosive potential, but he’s carried the ball only twice for five yards so far. Meanwhile, Gore has been ineffective –10 carries for 19 yards, but the Jets keep feeding him the ball.

We won’t try to explain, because there is no explanation.

No matter the outcome, the Jets probably left MetLife on Thursday night feeling like they dodged a bullet. Darnold was somehow OK after briefly leaving the game after what appeared to be a devastating shoulder injury.

Darnold left the field with his right arm dangling late in the first quarter, after he was sacked and slammed to the the turf on his shoulder by Broncos linebacker Alexander Johnson. Darnold went back into the locker room and it was fair to wonder if we’d see him again anytime soon, as analyst Troy Aikman speculated on the NFL Network broadcast that Darnold might have broken his collarbone.

But about 10 minutes later, Darnold emerged from the locker room jogging and looking for his helmet. He returned to the game moments later, early in the second quarter, after missing only a few plays.

Darnold’s arm appeared just fine later in the second quarter as he fired a 21-yard strike to receiver Jeff Smith while on the run.

But while the Jets’ most important player remained in the game and continued to play well, the injuries did not stop. Mekhi Becton, who was clearly in pain, left the game early in the second quarter and did not return. He wasn’t supposed to play Thursday night, as he deals with a shoulder injury, but he was forced into the game when backup Chuma Edoga left early with a shoulder injury and did not return.

Darnold gave the Jets their first lead of the season with an epic touchdown run in the first quarter. A lot of bad tackling from the Broncos and a series of tremendous moves by Darnold added up to one of the most memorable plays of 2020 as Darnold scampered 46 yards into the end zone.