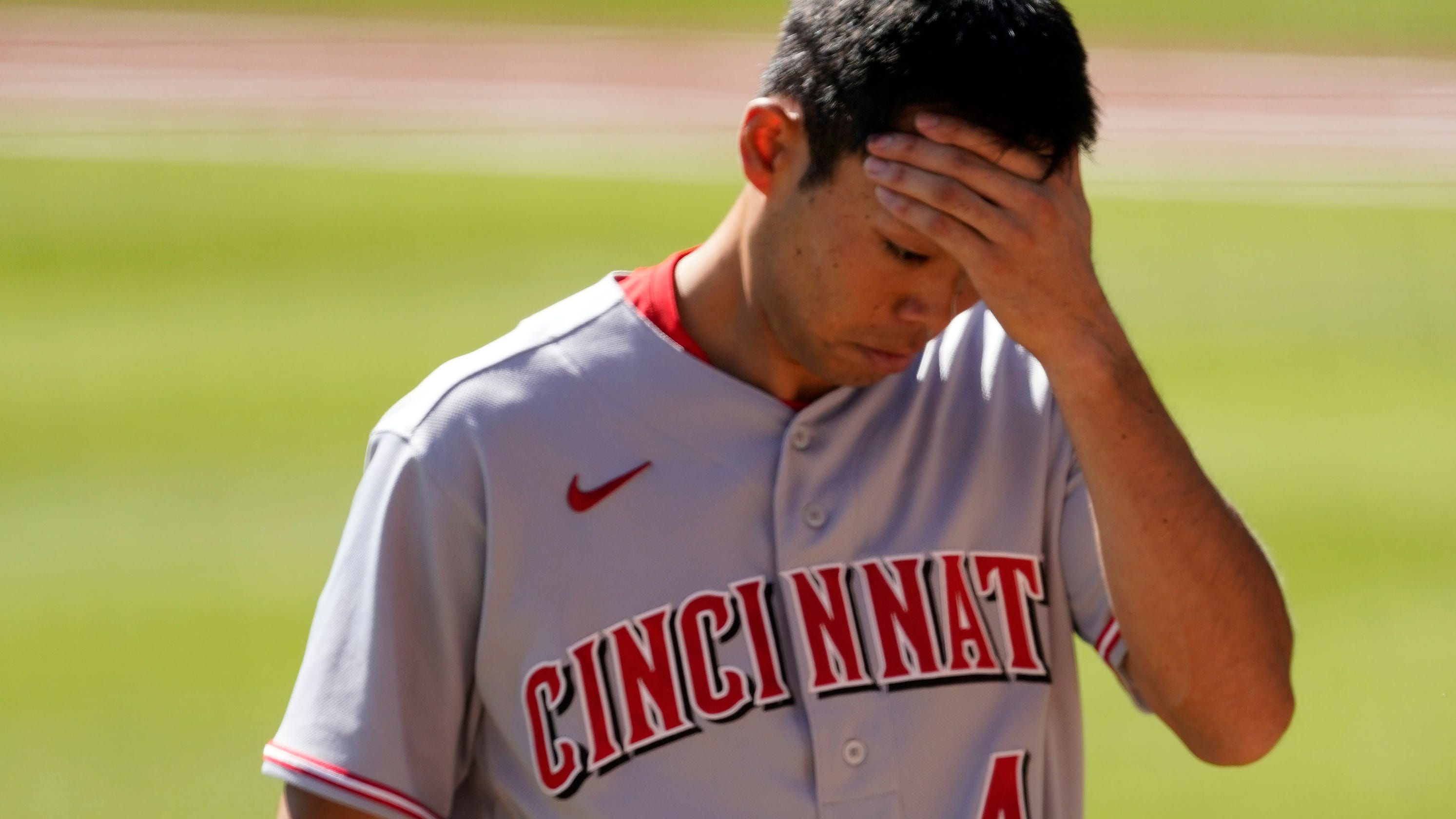 ATLANTA – When Ronald Acuña Jr. reached second base, he raised his arms above his head as his teammates in the Atlanta Braves dugout waved towels, pounded their hands on the railing and pointed toward at him.

Acuña, arguably the top rising star in the sport, did something the Cincinnati Reds couldn’t do in two postseason games. Acuña drilled a full-count slider into the left-field gap, scoring Austin Riley from first base in the fifth inning, to take a one-run lead.

One run is all it took to end the Reds’ season after a 5-0 Game 2 loss at Truist Park. The Reds didn’t score a single run across 22 innings in the best-of-three Wild Card Series, the longest scoreless streak to start the playoffs in MLB postseason history.

The Reds haven’t won a playoff series since 1995, winless in their last four appearances.

“I felt like we had as good of a team as anybody coming into this,” Tucker Barnhart said. “Our pitching staff pitched amazing. Just as an offense, we couldn’t do anything.”

Marcell Ozuna and Adam Duvall added a two-run homers to left field in the eighth inning against Reds closer Raisel Iglesias. Ozuna’s was a no-doubter as the Braves dugout erupted with cheers. Ozuna held a pose, taking a fake selfie, halfway down the first-base line. It was the first time Iglesias allowed an earned run since Sept. 6.

The Reds became the first team in MLB postseason history to fail to score a run in a series that lasted more than one game. The 1921 New York Giants had a 20-inning scoreless streak to begin their playoff run, according to Elias Sports Bureau, and the 2018 Atlanta Braves were shutout in their first two games.

“There was a little bit of pressing because you want to score runs, and you can’t score runs,” Eugenio Suárez said. “You start being frustrated. For me personally, I started thinking about why wouldn’t I score runs, why you’re not hitting base hits or whatever, why you’re not getting better at-bats to help my team score runs.”

When the Braves celebrated around the first-base line after the final out, several Reds players watched from their own dugout before retreating to the clubhouse. The last player to walk away was Sonny Gray, who was scheduled to start in Game 3.

The story of the Reds’ loss in Game 1 of the Wild Card Series was all their missed opportunities, stranding 13 runners on base, but they didn’t have many chances Thursday. In a must-win playoff game, the Reds produced a measly two hits and drew two walks against rookie right-hander Ian Anderson and Atlanta’s bullpen.

“Clearly, it sucks not scoring any runs, but losing is losing, no matter how you take it, especially at this point in the year,” Barnhart said. “Obviously, we would’ve loved to get our (pitchers) some runs. They deserved it. They earned it. It just didn’t happen.”

The Reds were last in the Majors with a .212 batting average, but they joined the 1906 Chicago White Sox (.210) and 2007 Arizona Diamondbacks (.250) as the only teams to finish with the league’s worst batting average and qualify for the playoffs.

Improving the offense was the front office’s top priority last winter. The Reds committed nearly $150 million to add Mike Moustakas, Nick Castellanos and Shogo Akiyama. With their pitching, Joey Votto called the Reds a “(bleeping) nightmare” entering the playoffs. Other players called them “dangerous” and “scary.”

“I meant what I said going into the playoffs,” Votto said. “I think both starting pitchers and the bullpen showed. We obviously didn’t do our part offensively. Kudos to the Braves. I thought they were tenacious and steady. Their pitching, I don’t want to say it was better than I thought it would be because it would be disrespectful, but they were very, very good.” 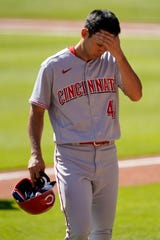 Cincinnati Reds’ Shogo Akiyama of Japan, heads to the dugout after grounding out during the eighth inning against the Atlanta Braves in Game 2 of a National League wild-card baseball series, Thursday, Oct. 1, 2020, in Atlanta. (Photo: John Bazemore, AP)

In a pitcher’s duel between two starters that throw excellent changeups, Luis Castillo had trouble against one player: Acuña. With Riley on first base and two outs in the fifth inning, Castillo gave up the go-ahed hit on an 87-mph slider at the bottom of the strike zone. Acuña’s hit rolled to the wall, scoring Riley without a throw to the plate.

Castillo shook off Barnhart once before that pitch, wanting to throw his changeup to Acuña. Barnhart signaled slider again. Barnhart felt it was the right pitch and said it was something they talked about a lot before the game.

“It’s a tough game to play when you’re trying not to give up any runs,” Barnhart said. “Clearly, that’s the way you play the game anyway, but when you know the offense is struggling and that we’re struggling to string any at-bats together, hits together or anything positive, it feels like you can’t give up any runs.

Acuña had three hits in three at-bats against Castillo. He hit an infield single to short in the first inning and he golfed a changeup way below the strike zone back up the middle for a two-out single in the third inning. Castillo appeared to smile at Acuña at the third-inning single after it whizzed past him on the mound.

Following Acuña’s run-scoring hit in the fifth inning, the Reds intentionally walked Freddie Freeman to bring up Ozuna. Castillo struck out Ozuna in a 10-pitch at-bat in the first inning with a 98-mph fastball at the top of the strike zone and struck him out again in the fourth inning. Castillo won another battle when Ozuna flew out on the first pitch to strand two runners on base.

Castillo, who would walk up to the chalk on the third-base line and then hop over it each inning, wasn’t as dominant as the two pitchers in Game 1, but he gave the Reds every chance to win. Castillo allowed six hits and one run in 5 ⅓ innings, striking out seven and issuing zero non-intentional walks.

He received fist bumps from all his infielders when he was replaced by Lucas Sims with one out in the sixth inning. Sims pitched 1 ⅔ scoreless innings, striking out four of the five batters he faced.

“I don’t care how great of a Major League hitter you are,” Braves manager Brian Snitker said. “Everybody we saw in this series, it was something pretty special.”

Anderson, the No. 3 overall pick in the 2016 MLB Draft, was making just his seventh big-league start, but he was in control all afternoon. He reached 97 mph with his fastball and fooled hitters with his 87-mph changeup.

“Nobody really comes to mind as far as the guys that are so over the top like him, almost like an Iron Mike pitching machine,” Barnhart said. “His fastball and changeup look exactly the same.”

Said Bell: “What makes his fastball elite is the way it has that rising effect, so he can do it up in the zone and down in the zone.”

The Reds loaded the bases in the second inning after Suárez opened with a single to left in a 10-pitch at-bat. Jesse Winker and Freddy Galvis drew walks.

Braves pitching coach Rick Kranitz made a mound visit as Anderson ticked above 30 pitches in the inning. With the bases loaded and two outs, Barnhart fell into a 0-2 count and grounded into a fielder’s choice to end the inning.

(Wednesday), we did a lot of good things, just couldn’t get anything across,” Barnhart said. “Not a lot of positives happened today and it’s a shame.”

Anderson retired eight straight, including a stretch of four consecutive strikeouts, before Galvis hit a routine ground ball that deflected off the first-base bag for a hit. Suárez tried to fire up his teammates in the dugout, yelling, “Come on!” and waving his arms to the Reds’ small cheering section near the suites.

The lively dugout didn’t change their offensive fortune. Anderson struck out the next two hitters and the Reds didn’t have another batter reach base.