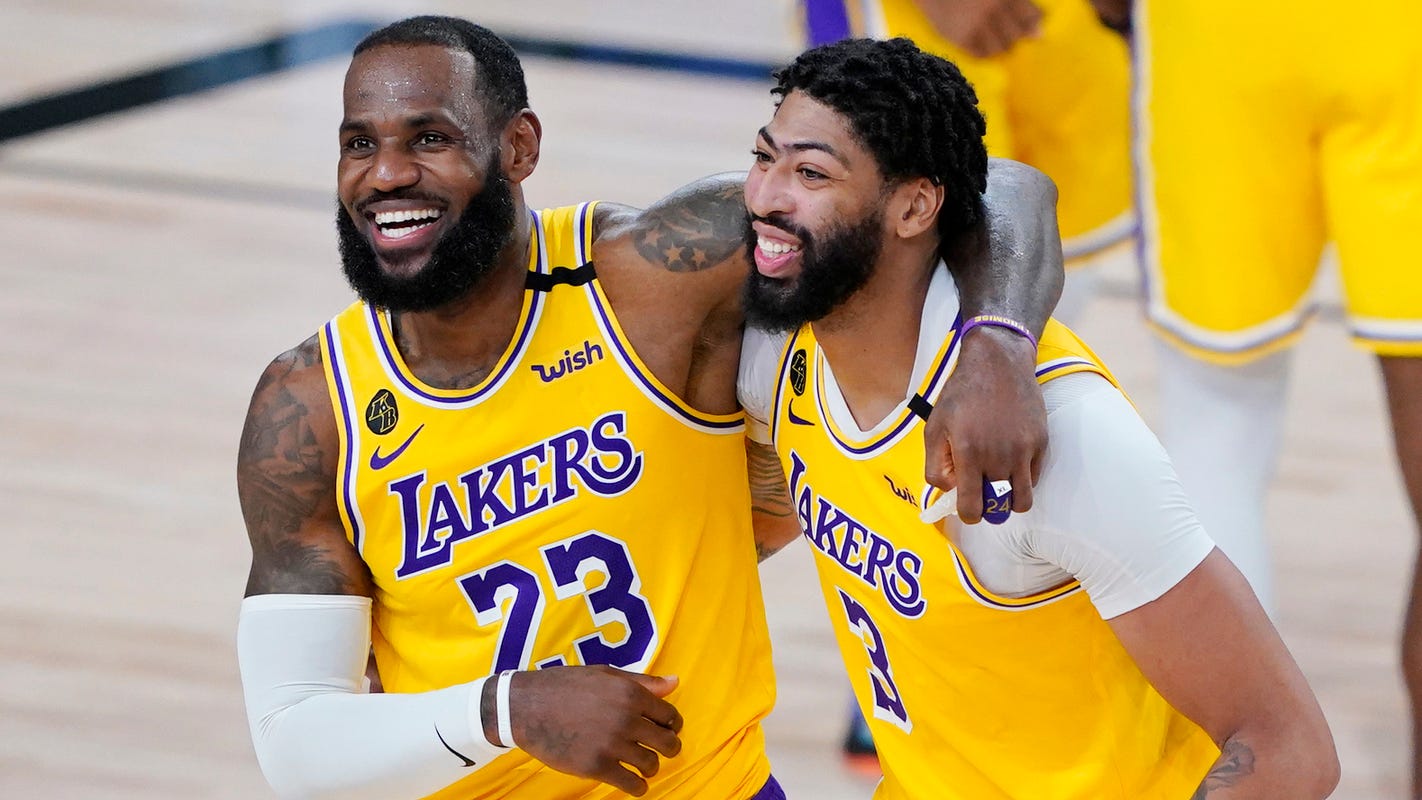 LAKE BUENA VISTA, Fla. – LeBron James joked the other night that he and Anthony Davis are like the two knuckle-headed characters from the Will Ferrell-John C. Reilly comedy ‘Step Brothers.”

“I get on his nerves a lot, for sure,” James said.

But there is a serious component to their relationship. What makes it work for the two stars on and off the court? James paused a couple of seconds to consider his answer.

“We’re not jealous of each other,” James said. “In professional sports, you have guys that join forces – call them two Alpha males, two guys that have been dominant in a specific sport on their own respective teams – they get together and talk about how dominant they can be, and they talk about it’s going to be this and that.

“I believe jealousy creeps in a lot, and that is the absolute contrary of what we are. We know who we are. We know what we’re about, and we want the best, seriously, every single day on and off the floor for one another. … Jealousy and envy have killed a lot of great things, not only in sports but in general.”

Said Davis: “When you’ve got two guys who are very selfless and want to win as bad as both of us want to, the rest of it goes away and just takes care of itself.”

The partnership – years in the making – has put the Lakers in excellent position to win the franchise’s first championship since 2010 and 17th overall.

LeBron James and Anthony Davis have the Lakers up 1-0 against the Miami Heat in the NBA Finals. (Photo: Ashley Landis, Pool photo via USA TODAY Sports)

The Lakers are up 1-0 against the Miami Heat in the NBA Finals after a 116-98 victory on Wednesday, a game in which Davis had 34 points, nine rebounds, five assists and three blocks and James had 25 points, 13 rebounds and nine assists.

They form a 1A-1B All-Star option that might be as good as any since another great Lakers tandem: Kobe Bryant and Shaquille O’Neal.

“We hold each other accountable,” Davis said. “When we watch film or even during the course of a game, if I did something wrong, he tells me. If he does something wrong, I tell him. That’s what makes it work, knowing that we trust one another to make reads, to make calls. We’re able to talk to one another.

In the immediate aftermath of the Lakers’ Western Conference championship against Denver – with confetti falling – James sat on the court alone in his thoughts: how much he respects Denver coach Michael Malone, his teammates headed to their first NBA Finals, the next opponent and his journey that has crisscrossed the NBA landscape.

He reserved a moment for Davis.

“AD had a lot on my thought process,” James said. “This is the reason why I wanted to be a teammate of his and why I brought him here. I wanted him to see things that he had not seen before in this league. To be able to come through for him meant a lot for me personally.”

James and Davis compliment and complement each other. Both draw double teams, both can finish at the rim and shoot from the outside and both can find teammates for open shots because they draw so much attention.

No matter how well a team plays defense, stopping that is a near-impossible task, especially when the Lakers’ role players make shots.

“Any time we have to win the game or have to play a certain way where one of us needs to take over,” Davis said, “we come up to each other and figure out what’s the best way to do that.”

The relationship began when Davis was in high school and attended James’ basketball camp. It continued when Davis, just off his freshman season as an NCAA champion at Kentucky and the No. 1 pick in the 2012 draft, played alongside James at the London Olympics.

The pair are often seen together on the NBA campus, riding bikes, walking to the restaurant or leaving practice together. At post-game press conferences in the bubble, James usually speaks first then waits off to the side while Davis answers questions. As they walk to the bus, they engage in tomfoolery for NBA Entertainment camera crews.

When Davis appeared in James’ peripheral vision during Thursday’s press conference, James told Davis to go back where he couldn’t see him.

Shortly after James signed with the Lakers in the summer of 2018, it became obvious he wanted Davis on his team. The Lakers tried to acquire Davis at the 2019 trade deadline, but New Orleans didn’t want to part with him then. They finally acquired Davis in a trade that officially was completed in July of 2019.

“When I first got here, he told me that he wants to give me my first ring,” Davis said. “And I told him, I want to get him back to the Finals. … We don’t want to let each other down. We know why I came here. We want to win a championship. We’re (three) wins away, a step closer to our goal.

The Lakers started 24-3, meandered here and there through the middle of the season and started to play great again before COVID-19 suspended play March 11. They have improved through the seeding games and each round of the playoffs.

Now, they’re just three victories from celebrating a championship, which reminded Davis of one thing that might make him jealous of James.

“That he has a ring,” Davis said. “But he made a promise to me, and so far he’s kept it. Hopefully I don’t have to be envious of that much longer. I want a ring, and he has three of them.”