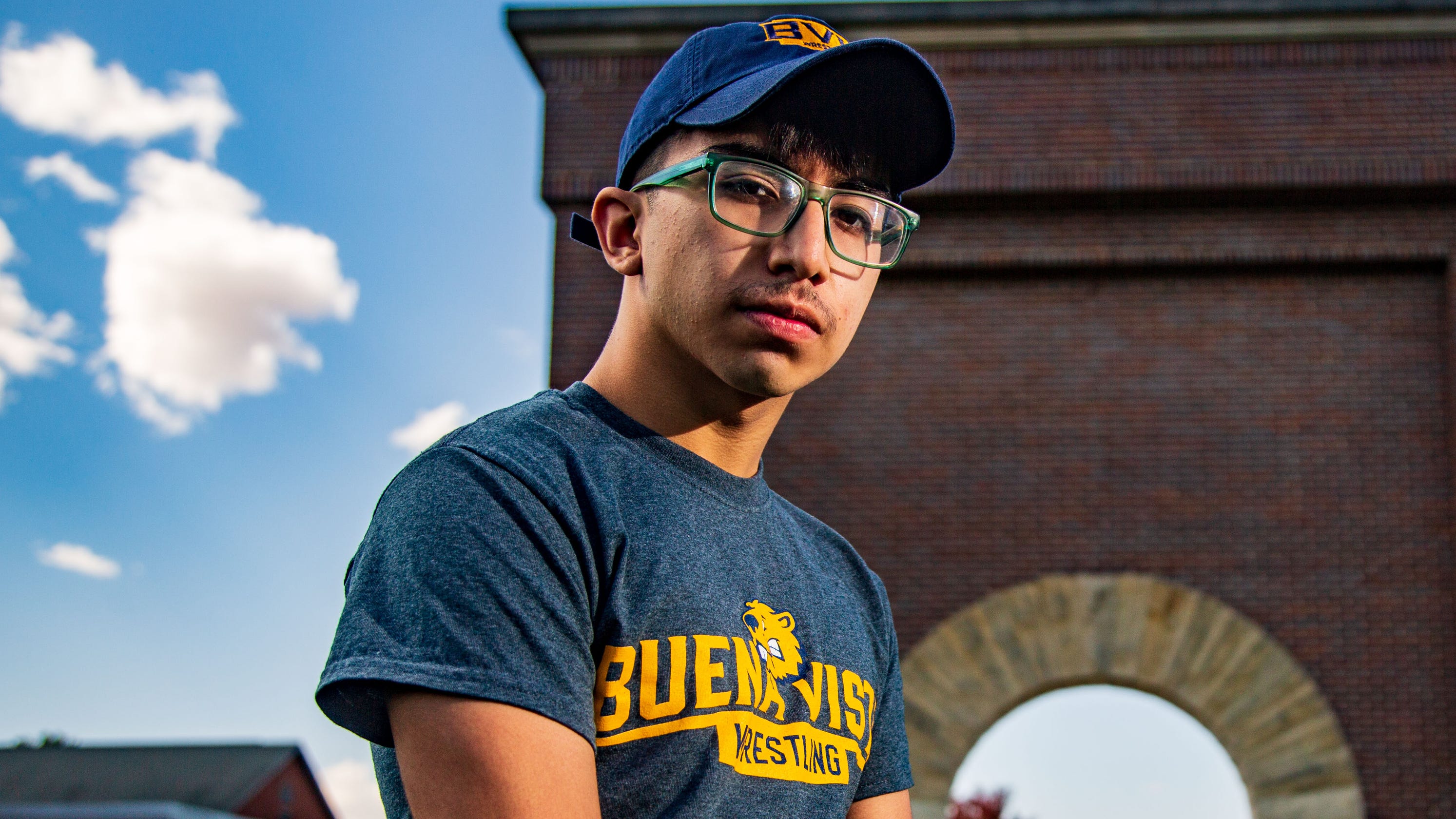 Diego Aguilera is a late-blooming wrestler who made his way from Texas to Buena Vista University in Storm Lake, Iowa, this summer to pursue his passion.

As Aguilera has learned, good wrestlers need the ability to think quickly, act decisively and, most importantly, execute in big moments. The freshman wrestler’s fortuitous path to school and a job in Iowa put him in the right place at the right time a few weeks ago to exercise those traits — and help save a life.

On Sept. 17, Aguilera was starting his first day of work at the Walmart in Storm Lake. He was being trained as an associate in the produce department by a colleague in his 60s. They stocked shelves into the evening, then retired to a break room in the back.

There, Aguilera said, the man clutched his chest and slumped over a box of bananas.

“I saw his head start tilting back, and he just looked more and more relaxed,” recalled Aguilera, who doesn’t remember the name of his new co-worker. “He said he didn’t feel well and couldn’t breathe. Then his face turned white, and he started sweating.”

The man was having a heart attack.

Aguilera jumped into action. He checked the man’s pulse and felt it slow down. He started chest compressions — which he learned through high school wrestling — and when the man regained consciousness, Aguilera asked him questions to help him stay awake.

“I was asking him about his kids,” Aguilera said. “Their names, their ages, just so he could focus on something. I figured getting him to think about his kids would keep him engaged.”

After a few minutes, the man finally spoke. We need a code white, Aguilera recalled him saying, which is Walmart’s code for an accident.

Aguilera sprinted out of the break room to manager Kristy Wagner, who confirmed the story when reached by the Register. She called for police and an ambulance. When they arrived, Aguilera helped guide them to the back room. The man was taken to a hospital in Sioux City.

It wasn’t until the next day that Aguilera felt the weight of the situation.

“In my mind, it wasn’t really scary in that moment,” he said. “It was more: What can I do right now to help? It wasn’t a matter of being scared or thinking I can’t do this. There was no time to think about it. I had to keep moving.

“Just talking about it and remembering what it was like — man, it gives me chills.”

It was something of a small miracle that Aguilera even ended up in Storm Lake.

He grew up in Pharr, Texas, the oldest of three siblings. He didn’t start wrestling until his freshman year of high school. That first day of practice uncovered a hidden passion. Aguilera wrestled all four years for the Wolverines, and as a senior, he went 33-7 while competing at 113 pounds.

“I had never done a combat sport or anything like that,” he said. “But I fell in love with it. Stepping on the mat for the first time, it was crazy.”

Ahead of his senior season, Aguilera attended a wrestling camp in Iowa. For the first time, he saw the passion the state has for the sport. Wrestling is big in spots in Texas but nothing quite like in Iowa.

On his way home from the camp, Aguilera remembered thinking to himself, I have to go back. Not long after his senior season, Buena Vista made contact. That was all Aguilera needed. He officially signed in May and moved to Storm Lake in mid-August.

Congratulations to Abel Alvarado and Diego Aguilera for signing their NLI’s to wrestle at Buena Vista University.#rgv#krgv#signingdaypic.twitter.com/GPJBMI33vV

Mark Rial, the Beavers’ coach, was blown away when Aguilera shared his Walmart story.

“It’s pretty amazing,” Rial said. “I’m just so impressed with the maturity. He’s in a new place, far away from home, so for him to do that without a second thought, it’s pretty incredible. You always put yourself in those situations. You know, what would you do? I’d hope to react the same way he did.”

Weeks before, he had been exposed to another Buena Vista student who had tested positive for the coronavirus. He had to quarantine for two weeks, so he attended all of his classes virtually and did push-ups and squats to stay in shape.

Then, just last week, the American Rivers Conference announced that winter sports competitions wouldn’t start until Jan. 1 because of the ongoing pandemic. Wrestling practices, however, begin Thursday. The Beavers are aiming to improve on last year’s 12th-place finish at the Division III Lower Midwest Regional Tournament. Aguilera hopes to vie for the starting spot at 125 pounds.

After Aguilera showed his ability to act quickly and execute when it matters, Rial is excited to see his freshman take those skills to the mat.

Cody Goodwin covers wrestling and high school sports for the Des Moines Register. Follow him on Twitter at @codygoodwin.