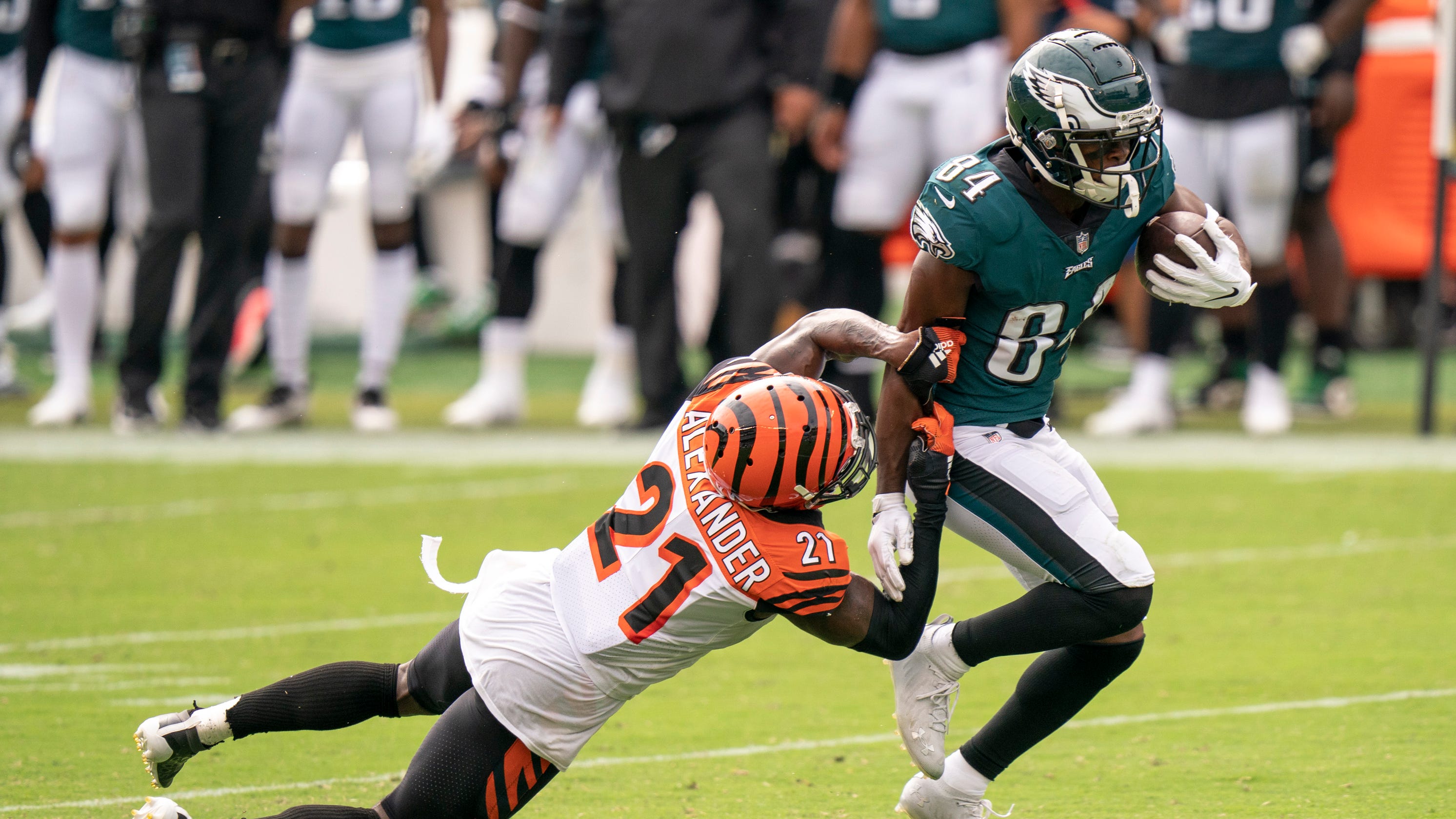 Philadelphia Eagles have only 1 healthy wide receiver in Greg Ward

PHILADELPHIA – The Eagles were determined not to be stuck in a situation like they were over the final four games of last season, where Greg Ward, a former practice squad player, would be their top wide receiver.

Yet three games into the season, here they are again with their top three wide receivers either out or possibly unable to play Sunday against the San Francisco 49ers.

The Eagles placed rookie Jalen Reagor on injured reserve Wednesday. Alshon Jeffery is still working back after having foot surgery last December. And DeSean Jackson, who left the game Sunday with a hamstring injury, did not practice Wednesday and is listed as day-to-day.

That’s in addition to tight end Dallas Goedert, who was placed on IR on Tuesday with a broken ankle.

It got even worse on Thursday as J.J. Arcega-Whiteside and rookie John Hightower also missed practice for unknown reasons.

That left Ward as the only wide receiver on the current 53-man roster practicing Thursday.

The others were practice squad players Deontay Burnett, Travis Fulgham and Marcus Green. Rookie Quez Watkins, who’s on injured reserve, is practicing this week. He’ll likely be added to the roster in the next day or so.

Last season, the Eagles won their final four games with a depleted wide receiver corps. That’s why quarterback Carson Wentz said he is used to the feeling by now.

“Without a doubt, it can be a resource,” Wentz said about the success last season with unheralded players. “It’s something to look back on and say, ‘How did I get on the same page with some of these guys even though it was a short amount of time to build that chemistry quickly?'”

Ward was the linchpin in that resurgence over the last four games in 2019. He was called up from the practice squad in November after never being on an NFL roster through his previous two-plus seasons.

Over those last four games, all must-wins, Ward had 21 receptions for 209 yards and a touchdown. That included the game-winning TD pass against Washington last Dec. 15.

Ward has continued that this season. He’s second on the team with 14 receptions. He converted two third-downs in Week 1 against Washington and two more in the Eagles’ 23-23 tie against the Cincinnati Bengals on Sunday.

Ward also hauled in a 29-yard touchdown pass against the Bengals, beating his defender down the sideline.

When the season began, Ward was considered the slot receiver, mostly working the middle of the field, especially on third downs. Ward was not expected to be the top wide receiver.

Yet there he was against the Bengals on Sunday, leading the Eagles both in receptions (eight) and yards (72).

None of that is a surprise to Wentz.

“Last year when he was asked to step up late in the season, he did an unbelievable job,” Wentz said. “So he’s a guy I have a lot of trust with, a lot of confidence in. He gets it. He was a quarterback in college. He sees the game differently. He plays fast. He understands it. He does a great job man and zone coverage, just knowing were to be and the timing.”

Really, the Eagles didn’t have much choice after Jackson left late in the second quarter with his injury.

For the second half and overtime, the other receivers on the field with Ward were Hightower, in his third career NFL game; and Burnett, himself promoted from the practice squad two days before the game. He was sent back to the practice squad after the game.

Ward knew he had to step up without Jackson, Jeffery and Reagor, just like he did last season.

“I have the same expectations and standards for myself every single week,” Ward said. “We’re hoping those guys play. Regardless of what happens, I’m always going to be ready. I’m going to make sure that I’m on top of my game.”

At the same time, the Eagles haven’t gotten much out of Arcega-Whiteside, their second-round pick in 2019.

Arcega-Whiteside has yet to catch a pass this season after a disappointing rookie season with only 10 receptions for 169 yards. He was on the field for just 18 out of 91 offensive plays against the Bengals, and wasn’t even targeted.

Pederson said Arcega-Whiteside suffered a minor injury in pregame warmups that limited his snaps against the Bengals. On Wednesday, Arcega-Whiteside’s injury was listed as a calf.

“The thing that we look at now moving forward, we’re going to have to find creative and unique ways to use all our players on offense,” Pederson said. “The tight ends, the runners, obviously, with Carson.”

“We’ve done this before. We did it at the end of the season last year. We won the four straight to get us into the postseason, and it appears we’re going to have to do that again.”