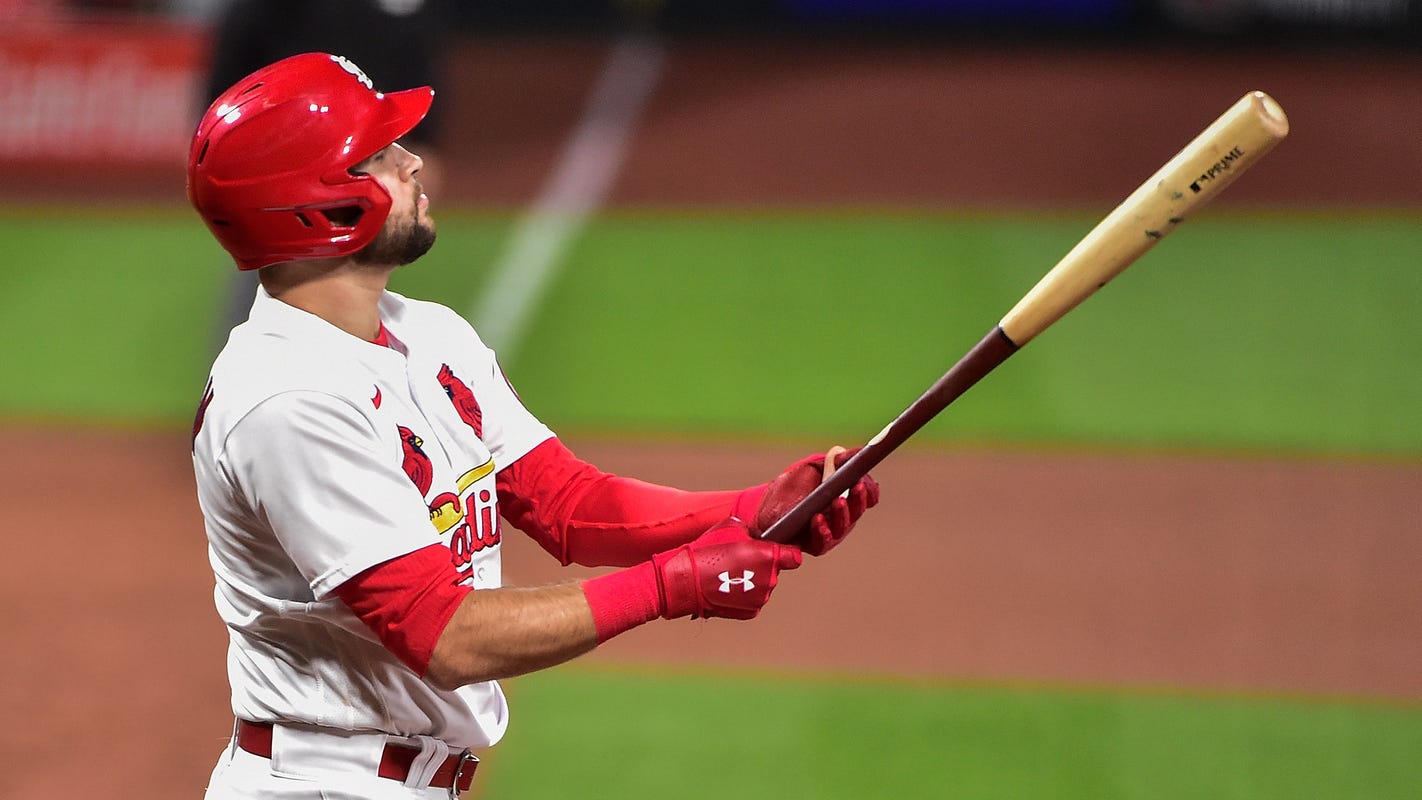 SAN DIEGO — The 21-year-old kid had his coming out party Wednesday afternoon, right there on the national stage.

The 38-year old man reminded everyone, that he may be old, battered and bruised, but even now 17 years after it all began, he still can influence a game like no other.

Together, Dylan Carlson and Yadier Molina have the St. Louis Cardinals on the brink of another postseason series victory, with the chance to clinch the best-of-three wild-card series Thursday after their 7-4 victory over the San Diego Padres at Petco Park.

And, just like that, the Cardinals are back, looking as imposing as ever.

“We wanted to come out,’’ Carlson said, “make a statement. There was a lot of excitement around this one.’’

Well, leave it to the switch-hitting kid who was in the Cardinals’ alternative camp site just two weeks ago, hitting .162 at the time of his demotion, to make a first impression not seen in Cardinals’ country since the days of Stan Musial and Albert Pujols.

They were the only players in the Cardinals’ rich history to hit cleanup at the age of 21 or younger in a postseason game, but while those legendary hitters were hitless in their debuts (in the 1942 World Series and 2001 Division Series), Carlson made an immediate impact in Game 1.

Carlson, who had batted cleanup only once in his career until Wednesday, went 2-for-3 with two walks, a double, scored two runs, stole a base, and made a spectacular diving catch that had Padres’ star Manny Machado shaking his head in disbelief.

He became the youngest Cardinals’ player with two hits and two runs in his postseason game since Joe “Ducky’’ Medwick in 1934, and only the third player in MLB history, joining Ronnie Stennett (1972) and Chris Speier (1971) to accomplish the feat.

The kid showed that belongs, and may never set foot in a minor-league camp again.

“He’s very even-keeled,” said Cardinals first baseman Paul Goldschmidt, whose two-run, first-inning homer, set the stage. “He’s done it in spring training as a 19 and 20-year-old. That’s the thing that has impressed me.”

Only time will tell whether he becomes a star, but certainly he’s showing a glimpse of why the Cardinals believe he’ll be a mainstay in their lineup.

WILD CARD:Eight things we learned from the eight playoff games

“I think his confidence level has really gone up,’’ Cardinals shortstop Paul DeJong said. “He was trying to figure out who he is as a player, and it always has growing pains. Everybody’s journey is different.’’

He barely resembles the guy who was demoted in early September to their alternate camp, hitting .162 with a .215 on-base percentage and .243 slugging percentage, leaving Cardinals Nation to wonder if their No. 1 prospect was nothing more than an over-hyped suspect.

“The first time around,’’ Carlson said, “there was a lot going on. A lot of different voices, different things.

“The big thing for me to focus on was being myself, playing my game.’’

Carlson hit  .277 with four doubles, a triple and two homers in the final nine days of the season, and with the Cardinals’ offensive woes during the season — producing the second-fewest runs with the second-worst worst slugging percentage in the National League — Cardinals manager Mike Shildt gambled that Carlson was ready for this moment.

“I told him this is an opportunity,’’ Shildt said, “it’s not a threat. Go play and enjoy what you do. It’s wonderful, fun playoff baseball. Just go be you and let your ability play and trust yourself.’’

Said Carlson: “To have the confidence from those guys behind me, it’s a big deal.’’

Well, if Carlson needs a role model to show what can happen with perseverance and dedication, he doesn’t need to look any further than Molina.

“This is not by accident, or that he’s lucky’’ Shildt says, “he studies as much as anyone. He’s in the weight room, doing catching drills before guys are dressed.

“He’s a great player and does a lot of different things to help you win a game. I’m glad he’s on our side.’’

Molina, a nine-time Gold Glove winner, nearly singlehandedly snuffed out the Padres’ rally in the sixth inning when they attempted a daring double steal. Molina’s throw to third baseman Tommy Edman was perfect, only for him to drop it, and given an error.

Certainly, the Padres are growing tired of seeing the guy, who once again is threatening to ruin their postseason. The last time they were in the postseason in 2006, they were eliminated by the Cardinals in the Division Series. In 2005, they were swept by the Cardinals. And now here is Molina leading the charge again, bringing along a new sidekick.

The Padres watched Carlson hit a double in his first at-bat in the first inning, and Molina, the No 5 hitter, followed with a run-scoring single. In the third inning, Carlson singled and Molina doubled. In the sixth, Carlson walked and Molina singled.

It was like the old commercial, “Anything you can do, I can do better.’’

Molina, one of only 12 catchers in history to have 2,000 hits, will be back behind the plate again Thursday. Adam Wainwright will be on the mound. It will be the 274th time Molina has caught Wainwright, the sixth most games by a battery combination in baseball history.

“It’s a tremendous blessing,’’ Wainwright says. “You played with somebody for so long that you don’t even know what it would be like without him there. One of the most proud things for me, something I can tell my kids, was that I was able to pitch to Yadier Molina every fifth day.’’

Who knows, maybe one day he’ll be able to talk about that 21-year-old cleanup hitter who burst onto the scene, too?