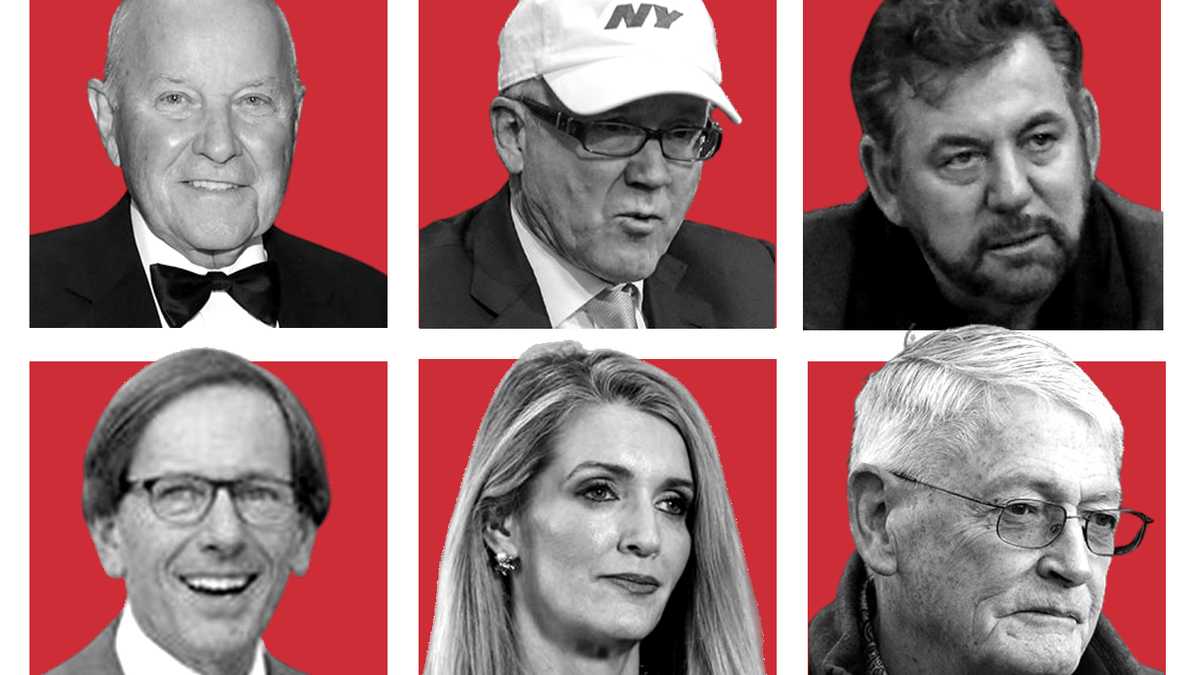 10 sports owners who have donated the most to campaigns

A review of federal campaign finance records by USA TODAY Sports found that the principal owners and managing partners of teams in six major American sports leagues have donated at least $14.6 million to various candidates, campaigns and political action committees during the 2019-20 election cycle.

And roughly two-thirds of that total can be traced back to just 10 owners — a select group of big-money donors who have given between $375,000 and $3.25 million in the past 20 months alone.

Here’s a look at those 10 top political spenders among sports ownership and where they have directed their money so far.

Johnson is far and away the largest political donor among sports owners during this election cycle, with more than $3.25 million in federal contributions to date. The 87-year-old retired finance executive, whose son Greg took over as the Giants’ control person last year, has made at least 94 separate donations in a span of 20 months, contributing the maximum individual amount ($5,600) to more than two dozen Republican candidates during that time. His five largest donations went to Republican political action committees or joint fundraising committees, including $435,200 to “Trump Victory” in February.

Johnson has donated a total of $1.99 million during this election cycle, exclusively to Republican campaigns and causes. This comes as little surprise, given that the Jets’ owner is currently serving in the Trump administration as an ambassador to the United Kingdom. (His brother, Christopher, has taken over the day-to-day operation of the team in his absence.) Johnson has made three separate donations of $360,000 or more so far in this cycle.

The DeVos family has long been a reliable fundraising source for Republicans, and Dan DeVos — brother-in-law of Education Secretary Betsy DeVos — is no exception. Since the start of 2019, his federal political spending has topped $1.2 million, with all but $10,000 of that amount going to right-leaning political action committees or candidates. The bulk of his funds have been directed to super PACs or party groups, such as the Republican National Committee.

This is the second consecutive election cycle in which Dolan has thrown significant financial support behind Trump. The Knicks and Rangers owner has so far donated more than $715,000 to the president and the Republican Party since the beginning of 2019, including a $355,000 contribution to Trump Victory in May. He also told the New York Post that he plans to be more politically active, particularly in New York politics, moving forward.

Loeffler’s dual role as co-owner of the Dream and U.S. Senator came under scrutiny earlier this summer when she expressed opposition to the Black Lives Matter movement at the same time that WNBA players were championing it. Thus far during the 2019-20 election cycle, she has donated more than $527,000 on the federal level — with more than half of that amount going to a Trump super PAC, and much of the remainder being spread between several of her Republican colleagues in the Senate.

The Braves are one of a handful of pro sports teams that are technically owned by a corporate entity, Liberty Media. Malone is the chairman of that company. The 79-year-old is the largest private land owner in the United States, and the bulk of his political activity during this cycle has come in the form of a $500,000 donation to “1820 PAC,” which has so far spent more than $2.7 million in support of Maine Sen. Susan Collins’ re-election campaign. Malone also made monthly donations to Trump in late 2019.

Kendrick, the managing owner of the Diamondbacks since 2004, has racked up more than $451,000 in federal campaign contributions during this election cycle — with all but $2,500 of that amount going to Republicans. He’s spread the donations between 40 Republican candidates and PACs, including multiple leadership PACs with stated goals of reclaiming control of the House of Representatives or maintaining control of the Senate.

A billionaire with wide-ranging business interests, Anschutz has given more than $411,000 to Republican candidates in the current election cycle, including a pair of six-figure donations to joint fundraising committees that benefit House Minority Leader Kevin McCarthy, R-Calif., and Sen. Cory Gardner, R-Colo. Gardner is facing one of the toughest re-election battles among Republicans in the Senate this fall.

Reinsdorf is one of several owners who have historically given sizable contributions to both Republicans and Democrats. During this election cycle, he’s given $252,000 to the GOP and $100,000 to a super PAC called “Illinois Democrats for Change” — though the latter donation isn’t quite as straightforward as it might seem. According to FEC records, Reinsdorf was the only person to give any money to that super PAC, which proceeded to transfer $93,000 to a Delaware-based LLC before going dark. Reinsdorf declined to talk about the $100,000 when reached by USA TODAY Sports, saying that he does not discuss his political donations.

USA TODAY Sports tracked the donations of spouses separately, even if they share ownership of a team — like Dee and Jimmy Haslam do with the Browns. And for that reason, Dee Haslam edges out her husband for the final spot on this list, with $375,400 in federal political contributions to his $355,000. The Haslams each donated exclusively to Republican candidates, with the exception of two Democrats in the House: Abby Finkenauer of Iowa and Kendra Horn of Oklahoma.