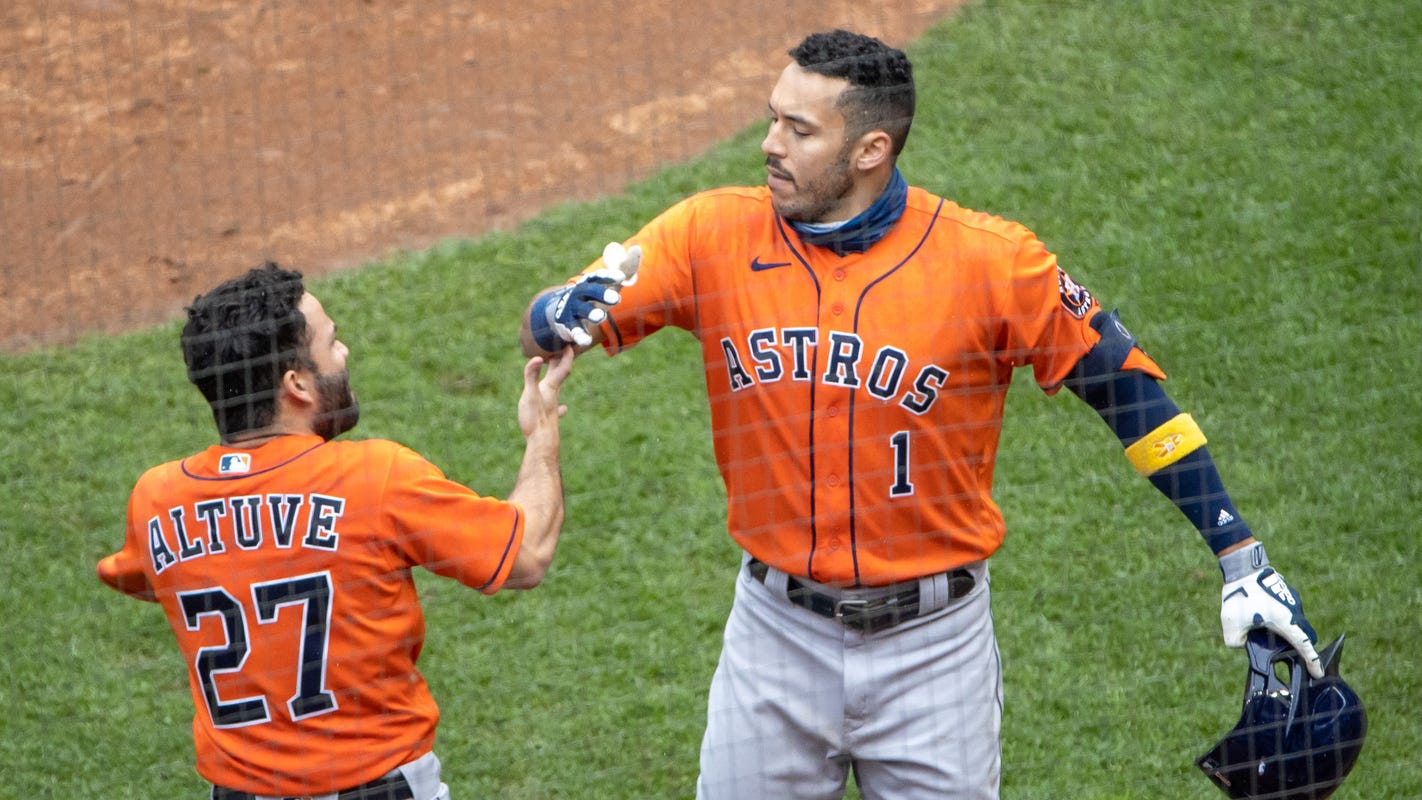 Through scandal and plague, injuries and insolence, the Houston Astros remain unstoppable in the American League playoffs.

Gifted a berth only because a 16-team, pandemic-inspired workaround granted them a reprieve after a 29-31 regular season, the Astros pitched with precision and got just enough punch from their scandal-plagued stars to defeat the Minnesota Twins, 3-1, on Wednesday at Target Field, and sweep the best-of-three wild-card series.

The Astros advance to Dodger Stadium, site of their 2017 World Series triumph that is now cloaked in controversy, to play the winner of the White Sox-Athletics series in a neutral-site, best-of-five AL Division Series. Game 1 is Monday.

Carlos Correa, caught in a spring war of words with fellow big leaguers after he pushed back against criticism of the Astros’ 2017 sign-stealing scheme, hit a go-ahead home run in the seventh inning and Houston got another excellent long relief outing to stifle the Twins.

After a relatively joyous postgame dance party, Correa indicated the Astros are on a mission of sorts – to power through an all-road postseason to prove to naysayers their exploits aren’t merely the product of their illegal sign-stealing at Minute Maid Park.

The Twins, meanwhile, lost its 18th consecutive postseason game, a streak that extends to 2004, and exited in the opening round of the playoffs – including two wild-card game losses – for the eighth time since 2003.

The Twins’ tormentors traditionally are the New York Yankees, but this year, in winning the AL Central, they drew the No. 6 seed Astros, who looked dispirited in finishing the regular season with five losses in their final seven games.

And why not? With November 2019 revelations of their 2017 sign-stealing scandal casting a pall over their lone World Series title and resulting in the firings of general manager Jeff Luhnow and manager A.J. Hinch, the Astros faced withering criticism all spring. After the shutdown mandated by the novel coronavirus, they received just one start from ace Justin Verlander before he suffered an elbow injury that will sideline him into most of 2021.

Yet while scorned, the Astros are still laden with stars, and they got just enough from them to subdue the Twins.

“I don’t think they had anything to prove. They just had to play ball,” said manager Dusty Baker, who has managed five teams to the postseason.

Luis Arraez was thrown at the plate on a relay from Kyle Tucker to Correa to Martin Maldonado, and the Twins scarcely threatened after.

They were shut out in 16 of 18 innings in this series, with Valdez giving the Astros five innings of two-hit, shutout relief in Game 2.

“We weren’t really sure they were going to be on the team. But they’re men, now,” Baker said of Valdez and Javier. “That’s how their personalities are. You can’t tell when they’re rattled. Framber will smile through it. Javier won’t show any emotion, at all.”

And suddenly, the Astros are sitting pretty moving on to the ALDS, with a berth in a fourth consecutive AL Championship Series in the offing. They will have a rested Lance McCullers Jr. for Game 1 and a bullpen that only needed one inning – the ninth in Game 2, pitched by Ryan Pressley – from their usual cast of relievers.

The Astros blew a 3-2 lead in losing the 2019 World Series to the Washington Nationals, and it seemed the sign-stealing scandal robbed them of their mojo.

Perhaps that’s the case. But in two games at Target Field, Houston showed it will be hard to eradicate, naysayers be damned.

“It just feels good to win and have these guys happy and feeling good about themselves,” Baker said.