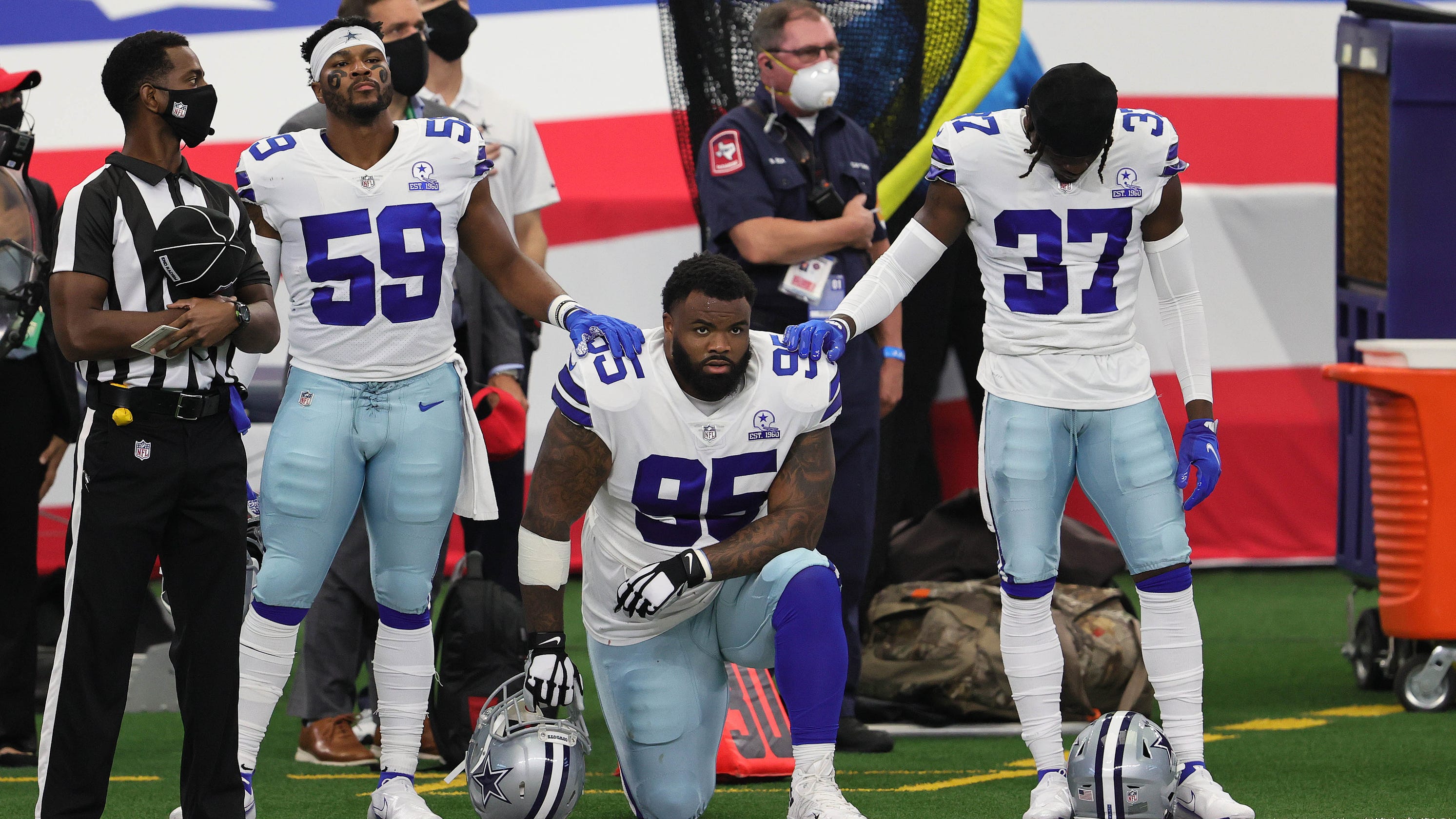 The defensive tackle knew when Dallas acquired him this offseason that no Cowboys played had kneeled during the national anthem since former 49ers quarterback Colin Kaepernick launched the movement in 2016. A few Dallas players had raised their fists to join protests of police brutality and racial inequity. But no Cowboy had kneeled, and Poe planned to. So he wanted to discuss his intentions with Jones.

“I had to talk with Jerry, had to talk with teammates, coaches to make sure this didn’t take away from our ultimate goal,” Poe said Wednesday. “And I just told them: I want to do this. If they had a problem with it, we were always open to sit down and talk about it. I want to explain to them what my reasoning was for this.”

Poe said his conversation with Jones was “all positive from both ends.” Each explained their different life experiences, Poe said. Since then, Poe has kneeled during the anthem each of the first three weeks. No other player has kneeled but teammates are visibly supporting him. Defensive linemen Aldon Smith and Antwaun Woods each placed a hand on one of Poe’s shoulders during the anthem Week 1 in Seattle. Linebacker Justin March and safety Donovan Wilson did so Week 2 against Atlanta. In Seattle, cornerbacks Jourdan Lewis and Saivion Smith flanked him. Expect the rotation to continue.

“The best thing you can do for Dontari is let him know: No one is questioning what he’s doing,” Cowboys right guard Zack Martin said. “Everyone’s behind him and the decision he makes. We’re going to keep doing that throughout the year.”

And Poe is going to continue kneeling.

“Just because I felt like America in the whole wasn’t doing the right thing about stuff that was happening to the people of my color,” said Poe, who is Black. “I feel like the oppression that’s being had, the racial injustice that is being had was really unfair and I feel like us as a country can do more. … I just want it to be known that I felt like it was wrong. I felt like it is wrong in the past, present, hopefully not in the future but maybe.

“I will be taking a knee until I feel like it’s taking a step in the right direction.”

PLAYOFF BREAKTHROUGH?: Cowboys could be one of nine teams poised to crash postseason party

In previous seasons, Jones insisted all Cowboys players stand, toe on the line, for the anthem. This year, the owner/general manager pivoted his stance and requested fans understand his players have issues they need help on.

“That’s the great thing about America: Everybody has a difference,” Jones said Sept. 4 on Dallas radio station 105.3 The Fan. “If our players are there, they are sensitive to and respect what America is as it relates to the flag. I’ll assure you that. I’d hope that our fans—and I think they will—understand that our players have issues that they need help on. They need help from the majority of America.

Quarterback Dak Prescott said before the season that “to force your opinion and your perceptions on somebody” isn’t what America needs in 2020.

“If I had it my way,” Prescott said, “that’s exactly what we’d do is express ourselves individually but love and support one another collectively.”

Poe said he was glad his kneeling is “being a big thing where we’re at odds about it.” After the anthem, he shifts his focus to football, where he’s started every game and played roughly half of the team’s defensive snaps. He has totaled three tackles during Dallas’ 1-2 start.

The nine-year NFL veteran began working to address inequity before he began kneeling. Through his Poe Man’s Dream Foundation, Poe has coordinated programming for underserved youth in Memphis and San Francisco, including for a “Shark Tank”-like competition for youth entrepreneurs. Poe said he spoke with police in Atlanta and Carolina in his previous NFL stops. More recently, he spoke with Dallas police officers at a local gas station.

“I have no problem with policemen if they’re doing the right things, and these guys were happy to see me,” Poe said. “So as I talked to them I said, ‘Can I ask y’all an honest question?’ From then we just talked and they told me, ‘Man, we would be more than happy to come anywhere that you would want—their police chief, their captain—to just come to talk to us and explain to us what’s going on in their particular neighborhood. It’s not all policemen, and terribly for us, it’s some. So we just want to get into their minds and I want to pick their brains.”

“It’s a lot of stuff to be done but I’m doing as much as I can in the offseason, during the season. I started in Memphis and I will be moving it to as many places as I can to try and put my imprint on being better.”