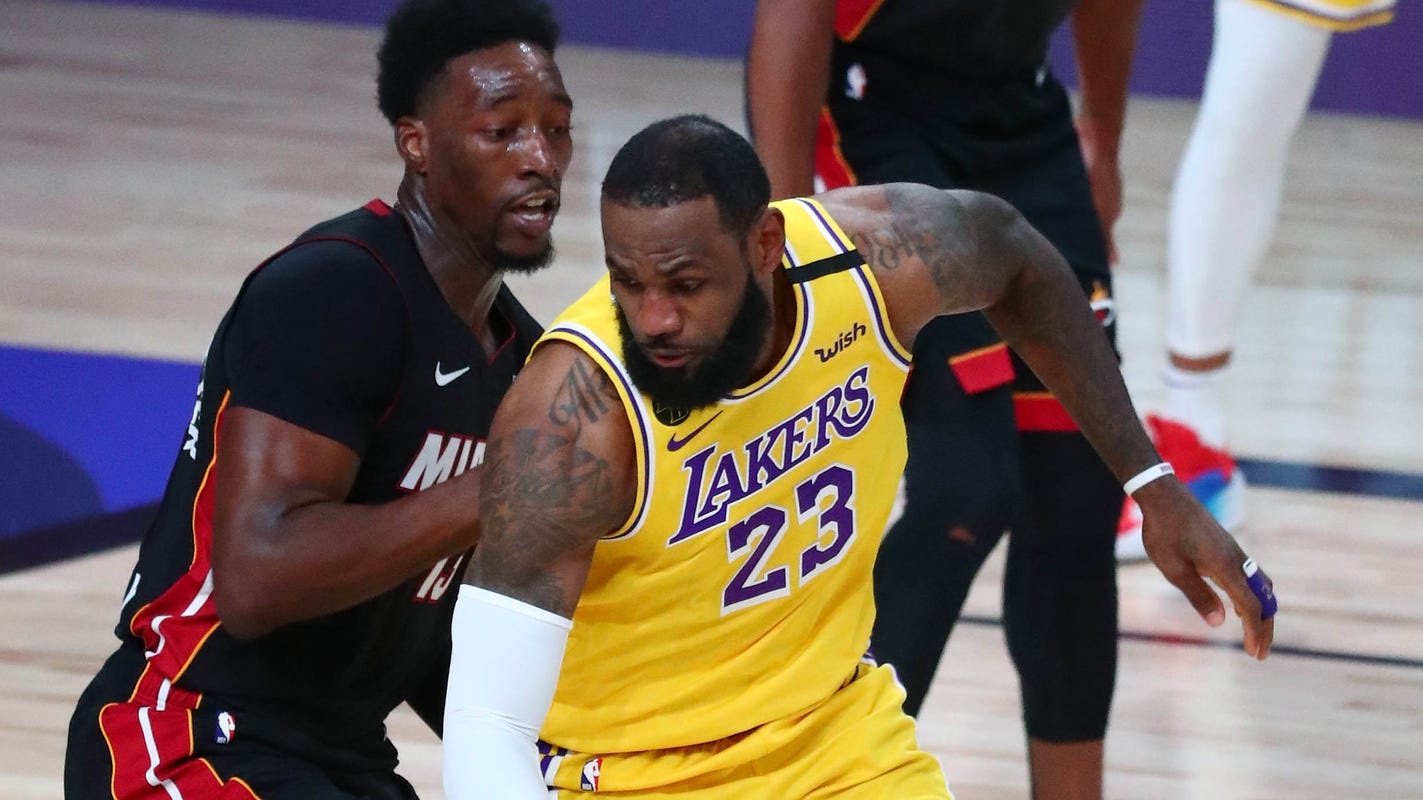 SportsPulse: LeBron James, Anthony Davis and the rest of the Lakers left Game 1 with a win and a boat load of confidence, while the Miami Heat left with injuries and the need for a new game plan. Mackenzie Salmon breaks it all down.

LAKE BUENA VISTA, Fla. — That was just way too easy for the Los Angeles Lakers.

Anthony Davis shined in his NBA Finals debut, LeBron James had a near-triple-double in his 50th Finals game and the Lakers treated the 3-point line like a layup line for two-plus quarters.

Davis had 34 points, nine rebounds, five assists and three blocks, and James scored 25 points, procured 13 rebounds and delivered nine assists in Los Angeles’ 116-98 victory over the Miami Heat in Game 1 of the NBA Finals on Wednesday.

While the Lakers ended up at 39.5% shooting on 3-pointers, they shot 64.7% from 3 in the first half when they pummeled the Heat.

“Paying attention to detail,” James said. “I don’t think in the beginning that we were physical enough. You have to get a feel for how hard Miami plays. I think they smacked us in the mouth, and we got a sense of that. And so we knew how hard we had to play if we wanted to try to make it a game.

“From that moment when it was 23-10 (Heat), we started to play to our capabilities. We started flying around. We started getting defensive stops. We started sharing the ball a lot better offensively and just got into a really good groove.”

Anthony Davis got high praise from his coach after a 34-point, nine-rebound, three-block performance in Game 1 of the #NBAFinals. pic.twitter.com/5IkCgP0ue5

It’s just one game, but the Heat found themselves with multiple problems defensively, and Miami coach Erik Spoelstra and his staff need to tinker with assignments and schemes. Of course, stopping Davis and James poses problems for every team.

Los Angeles’ size and athleticism also presented a problem. The Lakers outrebounded Miami 54-36, and Miami had to continually foul the Lakers, who were 25-for-27 on foul shots.

“The Lakers set the tenor, the tone, the force, the physicality, for the majority of the game, and they just took control and we weren’t able to get it back,” Spoelstra said.

Making matters worse for Miami, point guard Goran Dragic exited the game in the second quarter with a left foot injury and didn’t return, and center Bam Adebayo played just 21 minutes and wasn’t on the Heat’s bench for the final 18 minutes with a strained left shoulder.

NBA Commissioner Adam Silver: Development of a vaccine is not a prerequisite to start next season with fans

It was a game for about a quarter.

The game got worse from there for the Heat as the Lakers’ lead ballooned to 87-55 midway through the third quarter.

“It’s a cliché but every single possession counts, and there were too many possessions where it was either a poor offensive possession or a miss that led to a couple of poor possessions defensively or vice versa, and those stacked on top of each other can get away from you pretty quickly against a very good team like this,” Spoelstra said. “We’re much better than we showed tonight. You have to credit the Lakers, and we’ll get to work for the next one.”

This was the first Finals game for several Heat players, and it showed. If there’s a lone bright spot, it’s that the Heat cut a 32-point deficit to 13 and kept James and Davis on the court until the final minute.

“We’re not satisfied,” Davis said. “We don’t like how we ended the game. That wasn’t a championship mentality, and we have to be better in that regard. But we’ll take the win, but we’ll watch film and try to take advantage, as well.”