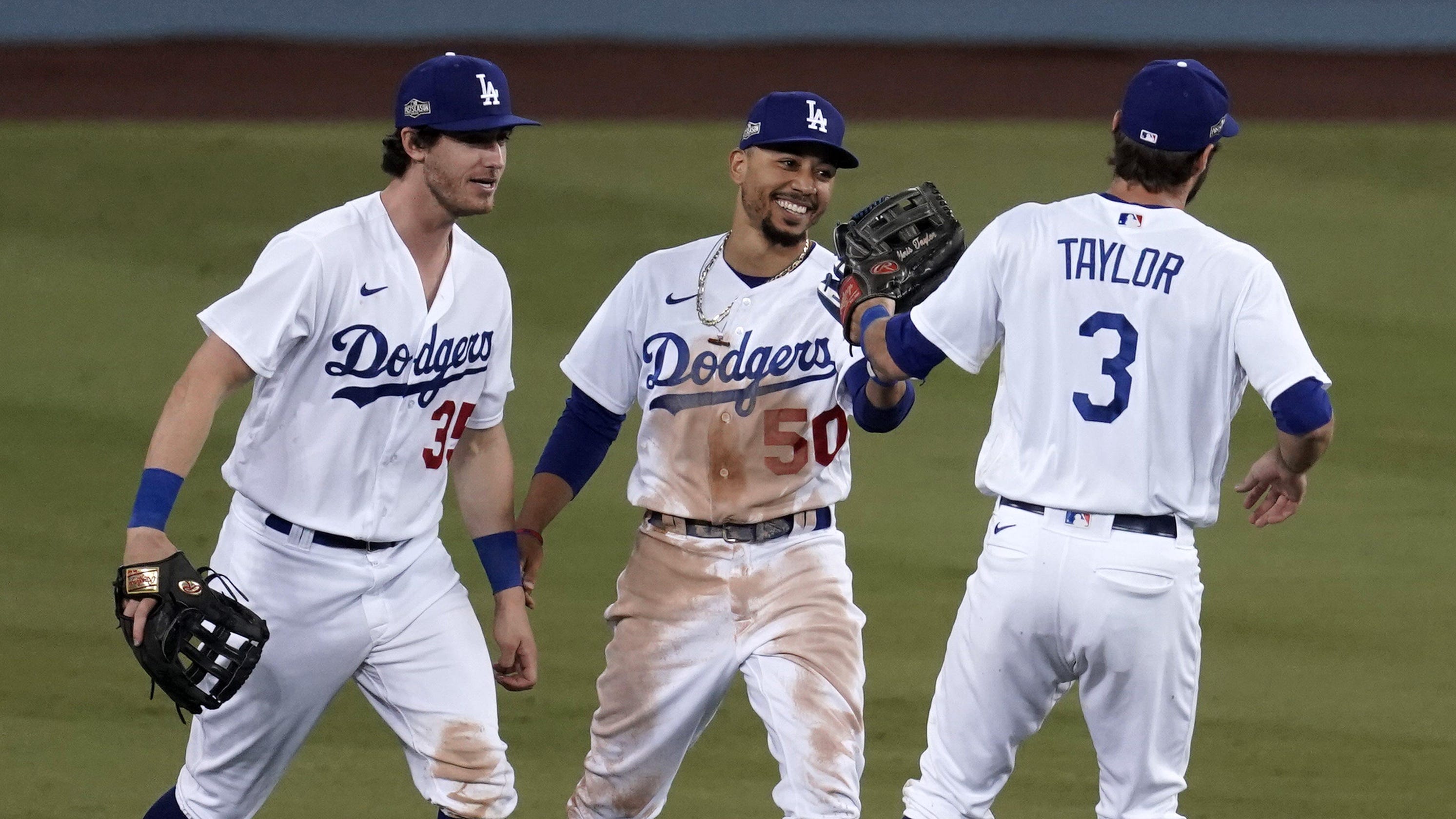 Thursday will feature five games, including the winner-take-all Game 3 between the Oakland Athletics and Chicago White Sox.

The Atlanta Braves, Miami Marlins, St. Louis Cardinals and Los Angeles Dodgers will have the chance to complete sweeps Thursday with Game 3s scheduled for Friday if necessary.

Here’s how the wild day unfolded:

An inexplicable loss of command by Brent Suter proved too much for the Milwaukee Brewers to overcome on Wednesday night.

He matched his season total by walking five batters in his 1 ⅔-inning spot start, and the two runs Los Angeles scored off those free passes turned out to be the difference in what was an otherwise competitive 4-2 loss to the Dodgers in Game 1 of the teams’ wild-card series at Dodger Stadium.

Pitching with a blister on his right index finger, Walker Buehler allowed two runs and three hits in four innings for Los Angeles. He struck out eight and walked two.

Each time the Yankees saw a path to San Diego and advancement into the next round of playoffs, the Cleveland Indians answered back Wednesday night. But the Yankees kept charging.

Down by a run in the ninth, Gary Sanchez’s game-tying sacrifice fly and DJ LeMahieu’s go-ahead RBI single pushed the Yankees to a 10-9 victory, clinching the best-of-three series.

In a wild Game 2 that had nearly everything but a swarm of Lake Erie midges, the Yankees advanced to play their heated 2020 rivals, the Tampa Bay Rays in a best-of-five AL Division Series that begins Monday.

The Yankees stormed back to take a 6-4 lead after falling behind 4-0 in the first, but the Indians tied things at six in the fifth with Jose Ramirez’s two-run double. The Yankees took another lead in the next frame, with Gary Sanchez’s two-run homer off Triston McKenzie.

Cleveland responded with a two-out rally in the seventh to even the game at eight on Jordan Luplow’s pinch-hit two-run double.

Be ready when your number is called.

The Indians scored four runs in a first inning that was interrupted by rain – following a rain delay before the game – to take an early 4-0 lead, but it didn’t too long.

New York pulled a run back in the second inning with a Giancarlo Stanton solo homer and then loaded the bases with nobody out in the fourth. Rookie James Karinchak, taking over for starter Carlos Carrasco, gave up a grand slam to Gio Urshela and the Indians promptly found themselves down 5-4.

Karinchak had only surrendered one homer in the first 32 ⅓ innings of his career.

Brewers starter Brent Suter issued four walks in the first inning, including two with the bases loaded – Will Smith and AJ Pollock – to put Milwaukee in an early hole in Los Angeles.

Suter had only walked five batters in 31 ⅔ innings during the regular season.

The St. Louis Cardinals scored early and often to become the fifth visiting team this postseason to win its wild-card series opener. The Cards got on the board quickly with a two-run homer from Paul Goldschmidt and held on for a 7-4 victory over the San Diego Padres.

Goldschmidt has been fantastic in the postseason throughout his career, entering Wednesday’s game with a .290/.347/.609 slash line in 17 games.

He launched his seventh playoff home run as part of a four-run first inning off Padres starter Chis Paddack, who lasted just 2 1/3 innings. The Padres used eight pitchers in the game, straining their depth even further after their top two starters — Dinelson Lamet and Mike Clevinger — were left off the wild card roster due to injuries.

For the second consecutive year, the Tampa Bay Rays have advanced to the American League Division Series. And this time, they may be better-equipped to survive any challenge they may face.

The Rays made quick work of the Toronto Blue Jays in the AL wild-card round, vanquishing the No. 8 seed with an 8-2 victory Wednesday night.

Now, a team that has won 62% of its games over the past three seasons is well-positioned to make the franchise’s deepest run in the postseason since winning the 2008 AL pennant.

The start of Wednesday’s AL Wild Card Game 2 was delayed by a threat of rain before the scheduled 7:05 p.m. start. The first pitch is expected to be at approximately 7:50 p.m., the Yankees said in a tweet.

Marcus Semien and Khris Davis homered and Chris Bassitt took a shutout into the eighth inning as the Oakland Athletics evened their wild-card playoff series against the Chicago White Sox on Wednesday with a 5-3 victory.

However, the outcome of Thursday’s decisive Game 3 may well be impacted by Oakland manager Bob Melvin’s decision to go to closer Liam Hendriks in the eighth inning to protect a five-run lead.

Major League Baseball said Wednesday that more than 11,000 tickets will be available for each game of the NLCS and World Series at Globe Life Fiel. That is about 28% of the 40,518-capacity, retractable-roof stadium of the Texas Rangers, which opened this year adjacent to old Globe Life Park, the team’s open-air home from 1994 through 2019.

Each pod will be distanced by at least 6 feet and a checkerboard pattern will be used, with alternating rows of seats in the middle or at the ends. Unsold seats will be tied back. No seats will be sold in the first six rows within 20 feet of the field, dugouts or bullpen.

Corey Dickerson hit a three-run homer off a fading Kyle Hendricks in the seventh inning, and the Miami Marlins beat the Chicago Cubs 5-1 on Wednesday in Game 1 of their NL wild-card series.

Jesús Aguilar also homered and Sandy Alcantara pitched three-hit ball into the seventh as Miami conjured up memories of past playoff magic in the franchise’s first postseason game since it won the World Series in 2003. The Marlins, who rallied past the Cubs in a memorable NLCS that year, have never lost a playoff series.

The top-seeded Tampa Bay Rays are making short work of the Toronto Blue Jays in their series. After scoring a run in the first inning against Hyun-jin Ryu, the Rays broke things open in the second with a home run by catcher Mike Zunino and a grand slam from outfielder Hunter Renfroe.

Ryu lasted only 1 ⅔ innings, allowing seven runs (three earned) and eight hits. Tampa Bay added another run off Ross Stripling in the third to jump out to an 8-1 lead.

Gifted a berth only because a 16-team, pandemic-inspired workaround granted them a reprieve after a 29-31 regular season, the Houston Astros pitched with precision and got just enough punch from their scandal-plagued stars to defeat the Minnesota Twins 3-1 and sweep the best-of-three series.

Carlos Correa, caught in a spring war of words with fellow big leaguers after he pushed back against criticism of the Astros’ 2017 sign-stealing scheme, hit a go-ahead home run in the seventh inning and Houston got another excellent long relief outing to stifle the Twins and advance to the AL Division Series.

Minnesota, meanwhile, lost its 18th consecutive postseason game, a streak that extends to 2004.

Never before in postseason history had a game gone scoreless into the 11th inning. The Braves and Reds blew past that mark before Freddie Freeman’s RBI single in the bottom of the 13th gave the Braves a 1-0 win.

The Reds had the bases loaded and one out in the top of the 13th but lefty A.J. Minter was able to work out of the jam.

Starting pitchers Trevor Bauer and Max Fried lived up to their status as NL Cy Young front-runners in Game 1 of the series. Bauer delivered perhaps the finest performance of his impressive 2020 season in his first playoff start for the Reds, striking out 12 without a walk and allowing two hits in 7 ⅔ scoreless innings. Fried was impressive himself tossing 7 innings and striking out five.

The two teams set a postseason record with 37 combined strikeouts.

Just like the San Diego Padres, the Milwaukee Brewers pitching staff was dealt a major blow. Rookie relief pitcher Devin Williams was left off roster for their Wild Card Series against No. 1 seed Los Angeles Dodgers.

Williams. who emerged as one of baseball’s best relievers this season, injured his shoulder last Friday. The NL Rookie of the Year candidate went 4-1 with a 0.33 ERA and 53 strikeouts in 27 innings. He gave up eight hits and one earned run all season while forming a dynamic duo with closer Josh Hader.

The San Diego Padres unveiled their Wild Card Series roster, and there were two glaring omissions. Right-handed pitchers Dinelson Lamet and Mike Clevinger, the team’s two best starters, were not on it. Lamet (right biceps tightness) and Clevinger (right elbow impingement) suffered injuries in their last starts of the regular season and were questionable heading into the playoffs.

“It legitimately is gonna be a day-to-day situation. I’ve seen some of the reports today that people are out or not out. We’re not looking at it that way,” said Padres GM A.J. Preller.

The Padres will turn to Chris Paddack in Game 1 and presumably Zach Davies in Game 2 against the St. Louis Cardinals.

Did Atlanta Braves mascot Blooper park himself behind home plate in a ghillie suit during the third inning of Game 1 of the Cincinnati Reds’ Wild Card series in Atlanta to try to mess with Reds starting pitcher Trevor Bauer?

A ghillie suit is camouflage clothing designed to resemble the background environment.

ESPN play-by-play announcer Matt Vasgersian and analyst Alex Rodriguez thought it was a bizarre move by Blooper, as did many on Twitter.

“The team employees do not have to disguise themselves in camouflage as it appears the Braves’ mascot has chosen to do this afternoon. … What’s going on there?” Vasgersian said.

“It’s got to be hot in there,” Rodriguez said.

“Is this like a Bill Belichick thing? Is he actually filming stuff in there?” Vasgersian added.

“He’s having fun. He’s got a great seat,” Rodriguez said.

“I’ve mastered the ability of standing so incredibly still… that I become invisible to the eye.”
– @Braves mascot Blooper pic.twitter.com/CF6iDyQVm0

Minnesota Twins prospect Alex Kirilloff will become the first player in history to make his debut by starting a playoff game. Kirilloff, 22, is playing right field and batting sixth for the Twins in Game 2 of the AL Wild Card Series against the Astros on Wednesday.

The left-handed hitter, is rated as the Twins’ No. 2 prospect and 27th overall by MLB Pipeline. Kiliroff is just the third player to make his MLB debut in a postseason game – but the first two to do so came off the bench.

UPDATE: In the fourth inning, Kirilloff became the first player in MLB history to record his first big league hit in the postseason with a single off Jose Urquidy..

When the Cincinnati Reds and Atlanta Braves complete their best-of-three series this week, one franchise will win its first playoff series in a long, long time.

Atlanta has been to the postseason more often but hasn’t won a playoff series since 2001 – nine consecutive series losses.