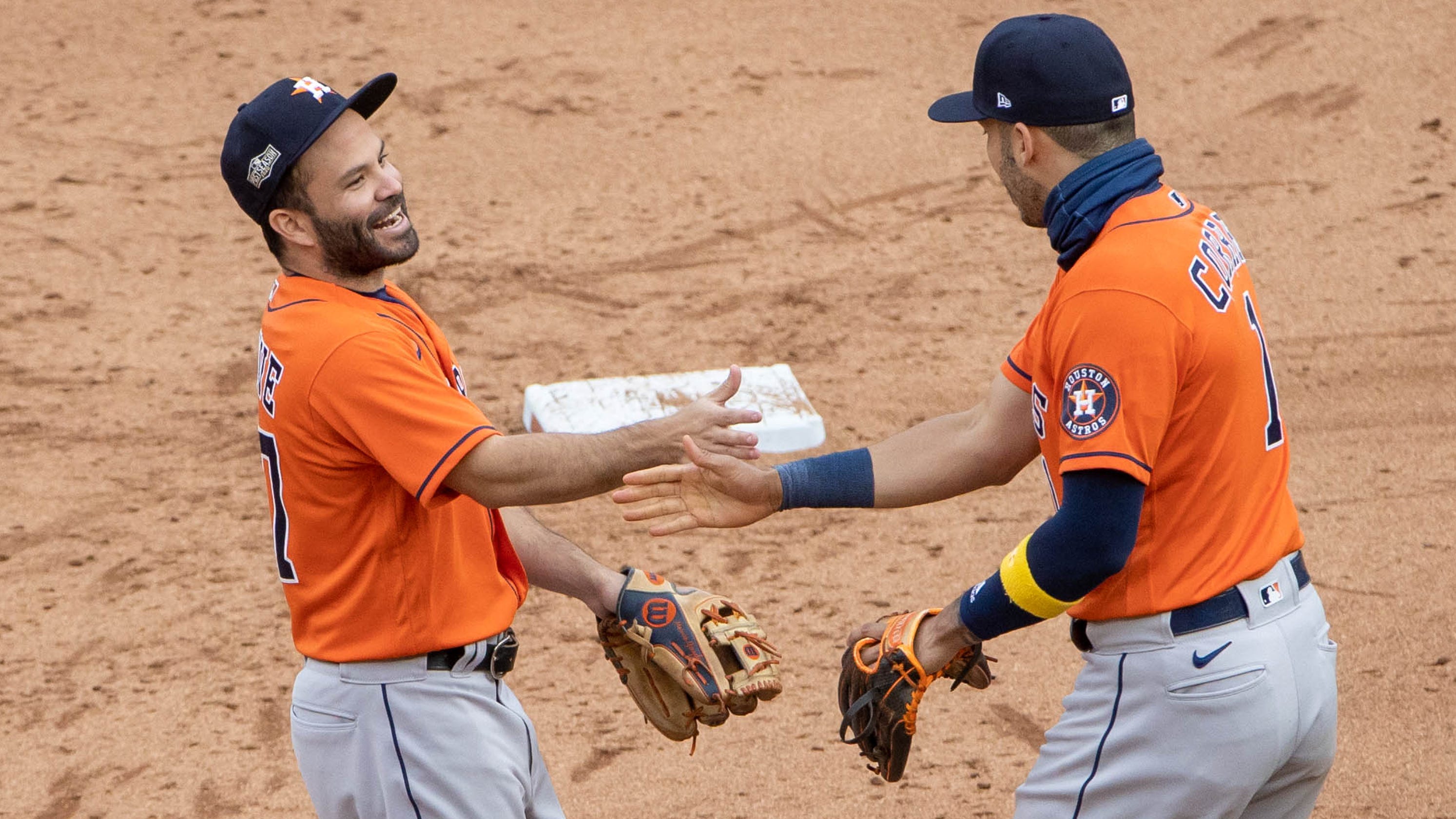 Nearly three years after their crimes against baseball, you can’t help but wonder if America’s Antiheroes will ever receive their comeuppance.

The Houston Astros stumbled into these expanded Major League Baseball playoffs as figurative losers – who doesn’t revile them for their sign-stealing antics on their way to the 2017 World Series title? – and literal ones as well, their 29-31 record feeling many years removed from three consecutive 100-win seasons.

They were shipped to Minneapolis on Tuesday only because 16 teams made this expanded postseason after a pandemic-shortened season that was a slog for everyone.

It was more of a death march for a club that earned the scorn of their peers after an electronic sign-stealing scandal marred their lone championship in their run of greatness and resulted in the firings of general manager Jeff Luhnow and manager A.J. Hinch.

MLB PLAYOFFS: Lack of off days will cause headaches for managers

Onward, though, went Alex Bregman and Carlos Correa and George Springer and Jose Altuve, the novel coronavirus barring fans from the stands but not sparing them the misery of a particularly cruel hangover season after they lost the 2019 World Series, apparently fair and square.

So pity the poor Minnesota Twins, who saw the never-punished and frequently-chided Astros find their footing in Game 1 of this American League wild-card series and turn Target Field into their playoff playpen.

Springer gave them hope, with a game-tying single in the seventh inning. Bregman, per usual, brought them swagger, making a pair of do-or-die barehand grabs of ground balls to quell potential Twins rallies.

And then there was Altuve, who began the year answering questions over whether an electronic buzzer was planted on his chest, where he insisted only a poorly-drawn tattoo resided. His season was shortened to 48 games by injury, the concept of hitting even a buzzer-aided pennant-winning home run – or so the conspiracy went – absurd in a year the three-time batting champ batted just .219.

On this afternoon, the only sign he needed was the take.

With the bases loaded in the top of the ninth, the score tied 1-1, he looked at a full-count pitch from Sergio Romo that was called a ball. Yuli Gurriel trotted home with the go-ahead run, and something resembling joy, maybe relief, filtered through the Astros dugout.

A few minutes later, after a Michael Brantley insurance hit and Bregman’s game-ending 5-3 double play, the Astros had a 4-1 victory that put the Twins one more loss from another quick trip to winter.

As for the Astros? Well, a 2020 season that has been largely written off may only get more fun from here.

While manager Dusty Baker regaled the long-distance media on a video call, clubhouse jams were audible on the feed.

“It is loud,” Baker reported to the Zooming masses. “It should be loud. It hasn’t been loud in a while. They should enjoy themselves, savor the victory, breathe in what it feels like and go on to tomorrow.”

Suddenly, the Astros could have a lot more tomorrows, a thought few have pondered until Tuesday afternoon.

After all, the Astros were terrible this year. Gerrit Cole is a Yankee, Justin Verlander is headed to the operating table and a once-vaunted pitching staff suffered the indignity of “piggybacking” starters in a playoff opener.

Yet, Zack Greinke was not visibly miffed when Baker yanked him after just four innings and handed the ball to second-year lefty Framber Valdez.

After walking his first two batters, Valdez was fabulous, pitching five scoreless innings, striking out five, walking no more after his initial hiccup.

“Framber was awesome,” said Baker. “Boy, that was a good game to manage, play, watch and everything else.”

The rest of the afternoon inspired the thought that maybe the holdover Astros and the new blood might get something cooking into October.

The Twins played no small part in that, gifting the Astros a second life in the ninth inning when Jorge Polanco threw wide of second on what should have been a routine force play.

“We got a break today,” said Brantley, whose two-run single eased the ninth-inning tension further.

A cynic might say the Astros deserve no more, not after the holdovers from the 2017 scandal skirted punishment from MLB, and then ducked the wrath of fans due to a pandemic.

The Astros would respond that they, too, endured the grind of pandemic baseball, all while losing their Cy Young Award winner and taking great pains to protect their new manager, the 71-year-old who has now piloted five franchises to the postseason.

While Baker had his 2021 contract option picked up, this represents something of a last dance for the gang, with Springer, Josh Reddick and Brantley headed to free agency and Verlander perhaps never to pitch for them again after Tommy John surgery.

They have two more chances to get one more win in the Twin Cities, and then it’d be onward to a likely Division Series matchup in California against the Chicago White Sox.

“I think this is going to be a great playoffs,” says Valdez, “for me and the team.”

Even if it makes everyone else miserable.