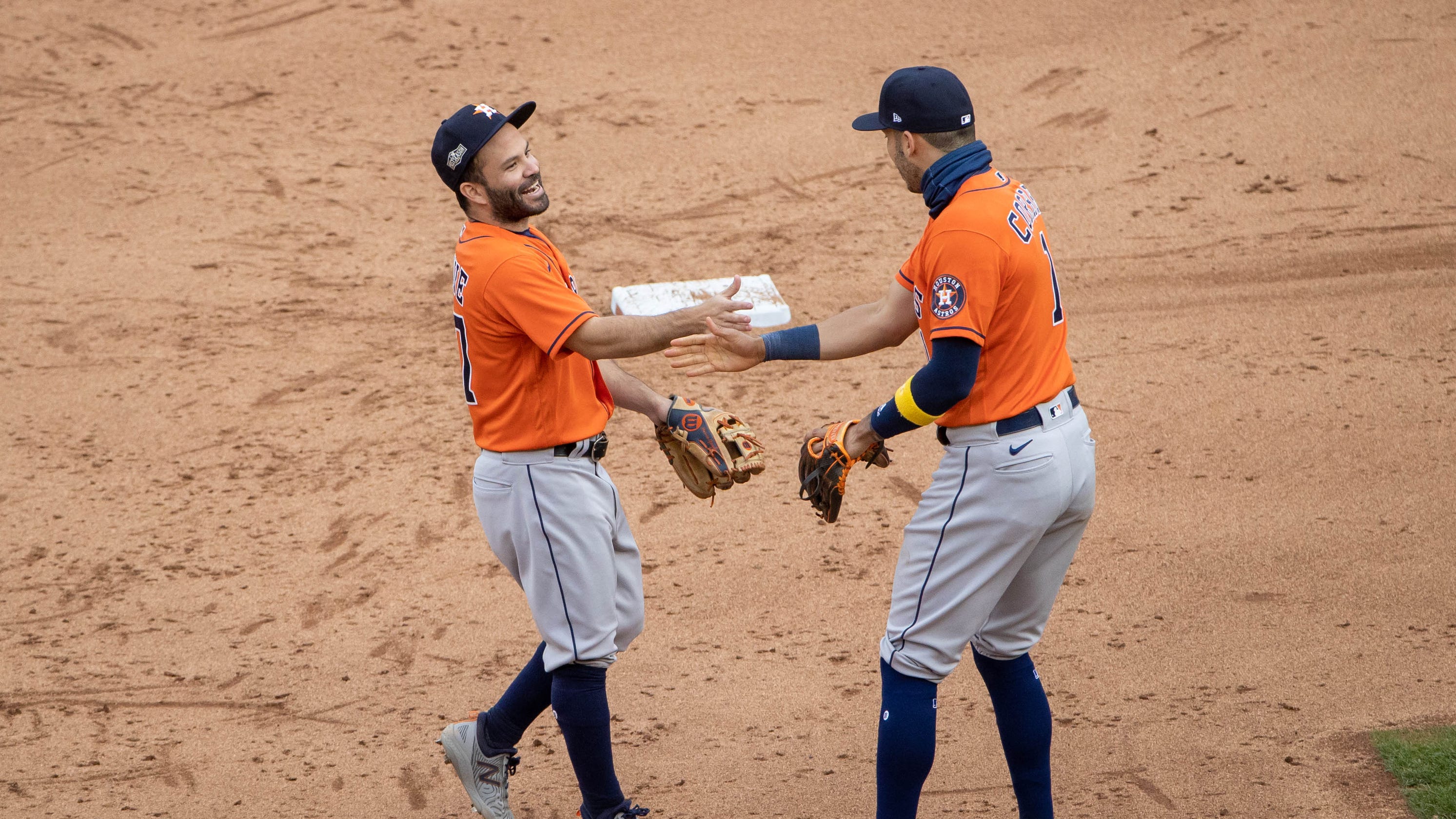 The best-of-three series are being played at the home ballparks of the higher-ranked teams with the winners advancing to the traditional best-of-five Division Series.

In the day’s first game, the Houston Astros beat the Minnesota Twins at Target Field on the back of reliever Framber Valdez’s seven shutout innings. The Chicago White Sox won 4-1 against the Oakland Athletics, with starter Lucas Giolito taking a perfect game into the seventh inning. The AL’s top-seeded Tampa Bay Rays held off the Toronto Blue Jays and the New York Yankees crushed presumed Cy Young winner Shane Bieber and the Cleveland Indians in the final game of the night.

Here’s how the day unfolded:

The Astros handed the Twins a loss in Game 1 of the ALWC. (Photo: Jesse Johnson, USA TODAY Sports)

Aaron Judge’s first-inning homer was followed by a steady stream of hits and runs, allowing Yankees ace Gerrit Cole to settle in and by the late innings, Game 1 of a treacherous best-of-three AL Wild Card Series had become a giddy romp for the visitors at Progressive Field.

Cole’s 13 strikeouts were the most by a Yankees pitcher in a postseason game since Roger Clemens’ 15 strikeouts in Game 4 of the 2000 AL Championship Series against the Seattle Mariners.

Presumptive Cy Young winner Shane Bieber, who hadn’t surrendered up more than three runs in a start this season, gave up seven runs in 4⅔ innings against the Yankees on Tuesday, putting the Indians into a serious hole to start the Wild Card Series.

Gleyber Torres’ two-run homer in the fifth gave the Yankees a 7-2 lead and ended Bieber’s night. New York had nine hits against the 25-year-old right-hander, who walked two with seven strikeouts.

And I was like baby, baby, baby oh. pic.twitter.com/QJY5jIHloY

Blake Snell took a no-hitter into the sixth inning and the top-seeded Tampa Bay Rays opened the playoffs Tuesday with a 3-1 victory over the Toronto Blue Jays.

Manuel Margot hit a two-run homer and Randy Arozarena tripled and scored on a wild pitch to give Snell and a dominant Rays bullpen all the offensive support needed to begin the best-of-three wild-card matchup.

The AL East champion Rays will try to advance Wednesday in Game 2 at Tropicana Field.

The Houston Astros stumbled into these expanded Major League Baseball playoffs as figurative losers – who doesn’t revile them for their sign-stealing antics on their way to the 2017 World Series title? – and literal ones as well, their 29-31 record feeling many years removed from three consecutive 100-win seasons.

So pity the poor Minnesota Twins, who saw the never-punished and frequently-chided Astros find their footing in Game 1 of this American League wild-card series and turn Target Field into their playoff playpen.

“It is loud,” manager Dusty Baker said after the game. “It should be loud. It hasn’t been loud in a while. They should enjoy themselves, savor the victory, breathe in what it feels like and go on to tomorrow.”

Snell, the 2018 AL Cy Young winner, was removed later in the inning and finished with nine strikeouts in 5 ⅔ scoreless innings.

Tampa Bay took the lead in the fourth inning when Randy Arozarena scored on Robbie Ray’s wild pitch after hitting a leadoff triple.

Chicago took the series opener against Oakland, a 4-1 win powered by home runs from Adam Engel, Jose Abreu and Yasmani Grandal. White Sox starter Lucas Giolito took a perfect game into the seventh inning and wound up with eight strikeouts in seven innings to pick up the win.

After Minnesota shortstop Jorge Polanco’s error extended the inning, Sergio Romo walked Jose Altuve to force in the go-ahead run, breaking a 1-1 deadlock in the top of the ninth. Michael Brantley followed with a two-run single against Caleb Theibar, and the Astros would hang on to win 4-1.

Framber Valdez relieved Zack Greinke after four innings with Houston trailing 1-0 and the left-hander wound up tossing five scoreless innings to pick up the victory. Ryan Pressly got the final two outs to earn the save for the Astros.

The Twins have lost their last 17 postseason games dating back to 2004.

Giolito, 26, threw a no-hitter on Aug. 25 against the Pittsburgh Pirates and is making the first postseason start of his career. The right-hander was an All-Star in 2019 and had a 3.43 ERA over the past two seasons.

White Sox starter Lucas Giolito set down the first 15 batters he faced Tuesday in Game 1 of Chicago’s series against the Athletics. He struck out three in the first five innings, throwing 41 of 60 pitches for strikes.

White Sox first baseman Jose Abreu hit a two-run homer off Athletics lefty Jesus Luzardo in the third inning in Oakland, extending Chicago’s lead to 3-0. Adam Engel had hit a solo home run in the second to open the scoring against the second-seeded Athletics.

Abreu led the AL with 76 hits, 60 RBI and a .617 slugging percentage and is among the favorites for the MVP award.

After the Twins opened the scoring in the third inning with an RBI double from Nelson Cruz), the Astros loaded the bases in the top of the fourth against Kenta Maeda. But with two outs, Maeda got Josh Reddick to strike out swinging to end the threat and escape unscathed.

Maeda, acquired from the Dodgers in an offseason trade, was 6-1 with a 2.70 ERA this year but was struggling with control early Tuesday, walking three batters in four innings. The right-hander had issued just 10 walks in 11 starts during the regular season.

Former AL MVP Josh Donaldson was left off the Twins’ 28-man roster for their Wild Card series against the Astros due to a calf injury. Minnesota signed Donaldson to a four-year, $92 million contract in the offseason but he was limited to 28 games, missing all of August with the injury and then sat out the final two games of the regular season.

Center fielder Byron Buxton, who suffered a head injury Friday, did manage to make it back and will bat second on Tuesday. Minnesota’s active roster also includes top prospect Alex Kirilloff, who could become just the third player in history to make his MLB debut in the postseason.