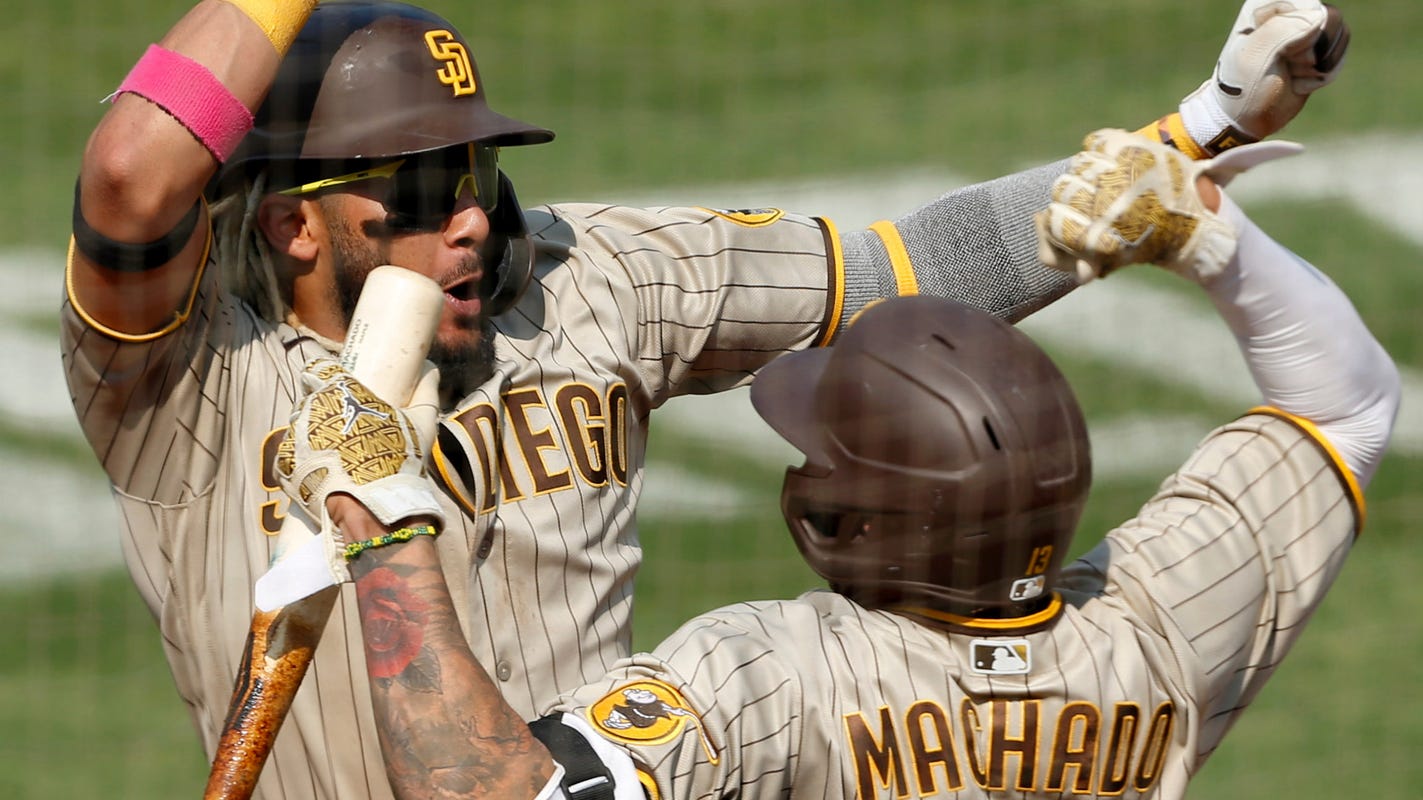 SAN DIEGO — The downtown streets are eerily quiet around Petco Park, but in those high-rise condos in the sky, the parking lots across the street, the bars and restaurants in the Gaslamp Quarter, the San Diego Padres’ fans are being heard.

They are limited to only cardboard cutouts and fake crowd noise inside the ballpark, but outside, they’ve got Padre fever, celebrating their first playoff appearance in 14 years, with dreams of winning the first World Series championship in franchise history.

They stand and cheer on the condo balconies surrounding the ballpark, just as if they were inside, with bullhorns, megaphones, drums, and waving the Padres’ flag, refusing to let this magical year pass without rejoicing.

“I’ve got a close friend who goes to every home game, who hangs over the balcony cheering,’’ Padres executive chairman Ron Fowler tells USA TODAY Sports, “and I’m concerned about the guy. I worry that he’s going to fall off that balcony.’’

Fowler, who has lived in San Diego since 1974, just five years after the franchise was born, starts laughing from his Del Mar, California, office.

“In this crazy year, and even crazier world,’’ Fowler said, “winning is so important here. It’s put smiles on a lot of faces in San Diego. I feel very good for what we’ve accomplished and for the psyche of San Diego.

“We have brought a little sunshine to an otherwise ugly year, and provided some positive relief to people.’’

The Padres, the only professional sports team in town with the San Diego Chargers fleeing to Los Angeles, will step on the national stage for the first time since 2006 Wednesday afternoon (5 p.m. ET, ESPN2). They’ll be playing Game 1 of the wild-card series against the St. Louis Cardinals, reminding the world there’s more than taco stands and beautiful beaches in this town.

“I think the whole city has been waiting for this moment,’’ said Tony Gwynn Jr., the son of the late Hall of Famer, the greatest player in Padre history. “It’s just been so fun around here. Even with no fans in the stands, the fan base is going crazy. The balconies are filled up around the stadium, the folks yelling from the apartment buildings, it’s been wild.”

This is a franchise that has reached the playoffs only five times in the previous 51 years. They had the second-most losses in baseball since their last winning season in 2010. The last time they won a playoff series Kevin Brown was their ace and Ken Caminiti was their slugger, dating back to 1998.

Why, they’ve had more uniform changes (18) than winning seasons (12) in franchise history, returning to brown and gold, where Fowler proclaimed: “This is going to be the uniform we win a championship in.’’

Well, who knows, there might be something magical about those uniforms. The Padres not only finished with the second-best record in the National League, 37-23, but became the most exciting team in baseball, dubbed SLAM DIEGO after hitting grand slams in four consecutive games, and in five of six, by five different players.

“I think that’s why everyone’s so excited here,’’ says Charley Osbon, a waitress at Bub’s At The Ballpark restaurant, just three blocks from Petco. “There’s so much energy downtown. I know it’s not the same as being inside the stadium, but people line up here just to watch the game on TV and cheer together.”

There weren’t enough margaritas in town to wash away the Padres’ frustration and futility over the years. Just a year ago at this time, Fowler was mad as hell last year and couldn’t take it anymore. He profusely apologized to the fan base for the team’s “embarrassing’’ performance at the season’s conclusion, finishing last again with a 70-92 record, and vowing that things better change in a hurry.

“Heads will roll,’’ Fowler said, “beginning with mine.’’

“I’m a fan first, I speak my mind,’’ Fowler said, “and I also speak in a way fans understand.”

The Padres finished the year losing 20 of their final 26 games, and Fowler’s reaction reminded folks in these parts of former Padres owner Ray Kroc grabbing the stadium mic during their 1974 home opener and screamed: “This is the most stupid baseball playing I’ve ever seen.’’

Well, just as the fans at Jack Murphy Stadium cheered Kroc that day after the announcement, the Padres’ fans loved Fowler’s candor, too.

“People here do appreciate his honesty,’’ Gwynn says. “Usually, an owner only speaks when something is big on the horizon. It’s not the case here. He speaks from a fan’s perspective. Ron goes on the radio and doesn’t sugarcoat anything.

“They appreciate it. They know where their owner stands on a lot of issues.’’

Well, Fowler’s decree may not go down in history with Knute Rockne’s pep talks, but something sure changed. Machado played his way into MVP contention with 16 homers, 44 runs, 47 RBI and a .950 OPS. Hosmer had his finest season since signing his eight-year, $144 million contract, with nine homers, 36 RBI and stellar defense. Myers, who they tried to trade all winter, had a bounce-back season with 15 homers and 40 RBI.

And, of course, there was Fernando Tatis Jr., the most exciting player in baseball, with 17 homers, 50 runs and 45 RBI. He may soon become a wealthy player, too, with the Padres trying to sign him to a long-term extension.

“We want to lock Tatis up,’’ Fowler said, “but there are so many questions what’s going on. We have a lot of money committed next year ($91.5 million).”

The Padres believe this is just the start of a championship-caliber run, and GM A.J. Preller’s moves at the trade deadline let everyone know the future is now, even while retaining one of the best farm systems in baseball. They sent 16 players packing while acquiring an ace (Mike Clevinger), a closer (Trevor Rosenthal), catchers (Austin Nola and Jason Castro) and a left-handed power hitter (Mitch Moreland).

“I think everybody sort of knew what our needs were, and A.J. pulled it off,’’ Fowler said. “It was check. Check. Check. And check. Oh, my God, it was unbelievable, and these guys fit in right away. It’s like they’ve been here all year.’’

The Padres have folks believing again. There may be no fans in the stands, but the players can hear them shouting from the rooftops, see them lined outside their parking garage, and even in the stadium parking lots where there are three big large video screens for fans to tailgate in their cars like a drive-in movie theater.

Fowler, who has respiratory problems and hasn’t seen a game in person all season, may even join in the fun. He has a doctor’s appointment Wednesday to determine whether it’s safe for him to be at Petco Park during this pandemic.

“I miss the fans, but I’ve got to tell you, I’m having the time of my life,’’ Fowler said. “I’m still feeling the energy in the city. We’re finally playing some good baseball and have this city excited.