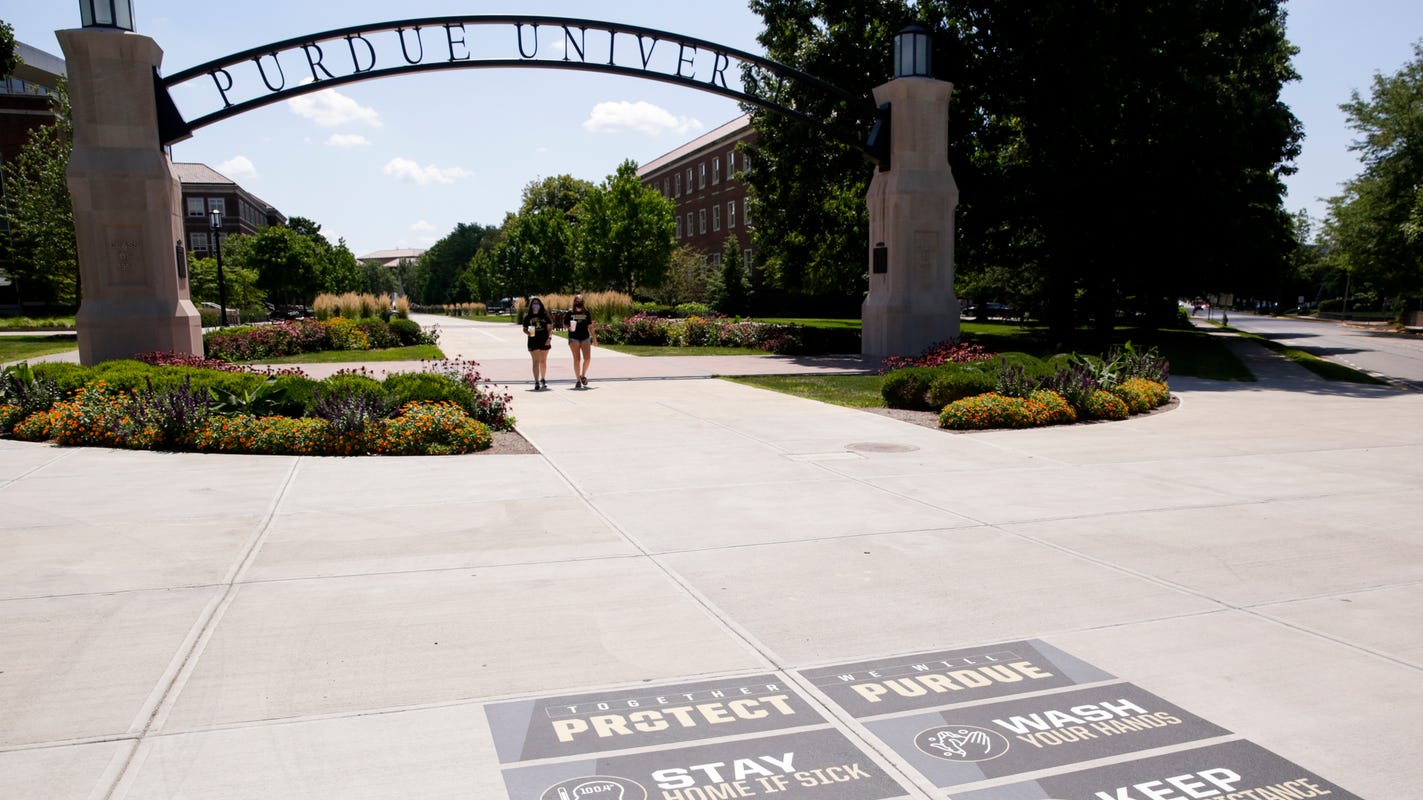 WEST LAFAYETTE, Ind. — Purdue gave 14 students, including 13 student-athletes, until Wednesday to clear out of their residence hall rooms after being suspended, accused of having a party that violated the university’s coronavirus-era Protect Purdue Pledge, the dean of students announced Monday.

Dean of Students Katie Sermersheim did not name the students, where they lived or which sports the student-athletes play. Purdue athletics issued a statement saying the 13 are “out-of-season student-athletes.” The university also did not say whether the students were among the 801 who had tested positive for COVID-19 on campus since Aug. 1.

In a release issued by Purdue, Sermersheim said University Residences staff found the group having a party in a campus dorm on Saturday. She said they were summarily suspended from the university. She said the students would have a chance to appeal.

The suspensions were the second round reported on the West Lafayette campus – and the first since before classes started Aug. 24 – after Purdue President Mitch Daniels installed the Protect Purdue Pledge into the university’s student code.

The pledge, a condition of admissions for the fall 2020 semester, calls on students to wear masks, observe social distance guildelines and other measures meant to curb the spread of COVID-19 and to keep the campus open during the pandemic.

The new rule, covering campus and off-campus activities, prohibits students from organizing or hosting parties “where the attendees are not required to, or willfully fail or refuse to, adhere to the requirements of the Protect Purdue Pledge or of state or local public health laws, regulations or orders, including but not limited to the requirements of maintaining appropriate social distancing … and wearing an appropriate face mask.”

Daniels imposed the party restrictions at a time when other college campuses across the country were struggling with coronavirus spikes during the first weeks of their semesters. Daniels said, at the time, that COVID-19 clusters generated by off-campus drinking would undo everything else – including some $50 million put into student testing, reconfigured classrooms, contact tracing teams, personal protective equipment and more – the university put together in its Protect Purdue reopening plan after closing campus midway through the spring 2020 semester.

“On one hand, we are glad to have had only two of this type of incident in six weeks,” Purdue President Mitch Daniels said in a statement released Monday by the university.

“But we will deal with any such violation with firmness,” Daniels said. “The fact that this episode involved student-athletes can make no difference. At Purdue, we have one set of rules for everyone.”

“Purdue Athletics is aware of the incident that took place over the weekend involving 13 out-of-season student-athletes. Our student-athletes, coaches and staff remain committed to following the guidelines of the Protect Purdue Pledge, and have been working with the university throughout this process. While this is an unfortunate occurrence, we hope it’s instructive for all Boilermaker students and reinforces the importance of protecting everyone on campus during this time.”

Asked by the Journal & Courier to clarify out of season, Kassidie Blackstock, Purdue associate athletic director for strategic communications, said the student-athletes participate in winter/spring sports.

In August, less than 24 hours after Daniels announced the new student conduct rule, Purdue suspended 36 people in connection with a party at the Circle Pines Cooperative, a house at 1000 David Ross Road. A Circle Pines adviser later said the students appealed and were able to stay in school.

Tim Doty, Purdue spokesman, couldn’t confirm that or whether the university imposed sanctions short of probation, saying the university wasn’t commenting on individual cases. Doty also didn’t have numbers of other cases, if any, referred to the dean of students office regarding Protect Purdue Pledge violations since the semester began.

Sermersheim said in a university release that the weekend party should be a reminder to students that the university was serious about the pledge.

“This virus continues to be the demise of many universities and academic pursuits,” Sermersheim said in a statement released by the university.  “The majority of our students are behaving admirably in following the pledge and helping protect the Purdue community. For that, we are grateful, but we cannot let our guard down and must hold those who violate our community standards accountable.”