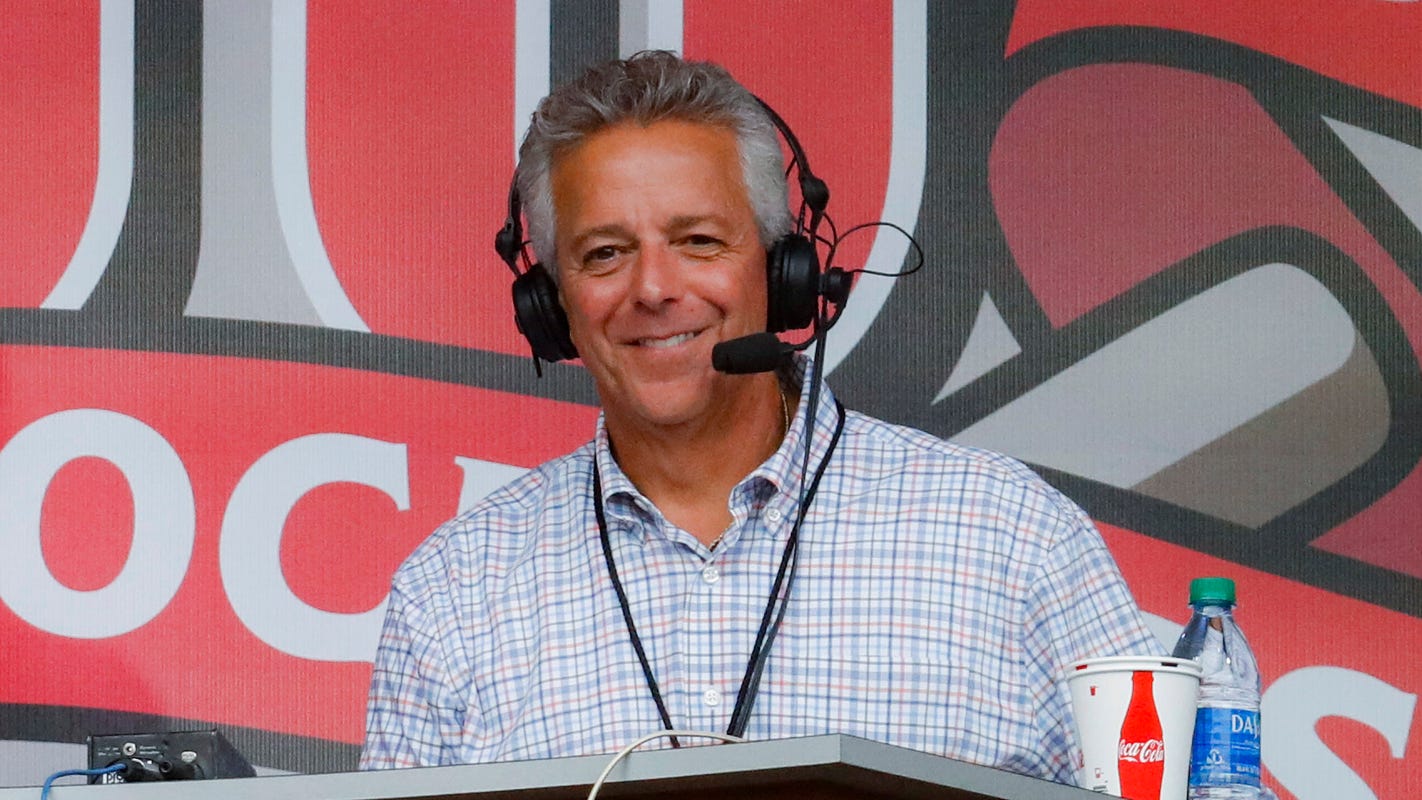 ‘I hurt a lot of people’

Thom Brennaman tried but the self-inflicted pain is too great, resurrecting the memories of Aug. 19: the night he uttered that word on television, changing his life forever.

He can’t bring himself to watch his Cincinnati Reds, who are back in the postseason for the first time since 2013.

“I’m very happy for them, I’m happy for their fans … but I can’t do it.’’ Brennaman told USA TODAY Sports in his first interview discussing the incident, “At this point, it would just cause anxiety, create tension, wondering ‘what if,’ and I don’t have time for those things.

“I don’t have the energy, and It wouldn’t do anybody any good.’’

“I hurt a lot of people,” Brennaman says. “I have to live with it for the rest of my life.’’

Now, for the first time since the days of the Big Red Machine, there is no Brennaman behind the microphone – and there may never be again.

Brennaman officially announced his resignation last week, but the Reds had already decided he wasn’t returning. FOX Sports, where he worked as an NFL announcer since 1994, has indefinitely suspended him.

He would love to work in broadcasting again, but  knows the homophobic slur he uttered during Game 1 of a doubleheader will resonate forever.

“I don’t even remember saying that, or what I was talking about,’’ Brennaman says. “To this day, I couldn’t tell you a single pitch, the score, I can barely remember who was playing in the game. Maybe it was the shock, I don’t know. I just remember getting a clip from the Reds in between games of the doubleheader. I’m in a state of shock, my phone is blowing up, the computers are blowing up, this was very, very, very serious.’’

The second game of the doubleheader started, and in the fifth inning, Brennaman was told he has to immediately leave the broadcast, openly wondering if he would ever put on the headset again.

“I asked them if I can at least apologize on air,’’ Brennaman said. “I’m watching my career and my world fall apart. I had 45 seconds. I’m going on live TV. I don’t even remember what I said in my apology, only that I stopped to call [Nick] Castellanos’ homer. And then I have people criticize my apology. I don’t even know what that means.”

“All of that stuff is irrelevant now. I said what I said. Thom Brennaman used the word. I never remember using that word in my adult life but I did that night. I’m the one who has to live with the consequences of it.”

Brennaman was recently invited to the home of Ryan Messer, vice president of the Cincinnati Board of Education and co-founder of Greater Cincinnati’s Human Rights Campaign, who is also the voice of the LGBTQ community in Cincinnati.

Messer, who had written an op-ed for the Cincinnati Enquirer about Brennaman’s use of the slur, invited about a dozen people from the LGBTQ community to speak. The meeting lasted 2 hours and 15 minutes, leaving Brennaman in tears.

Several members of the group made it clear this was not going to be an apology tour. They questioned his motivation. They openly chastised him, telling him the pain he caused, and wondered if he was simply meeting them to help save his job.

“Even though I had already met with numerous gay men and gay leaders since the incident,’’ Brennaman said, “there were a couple of people really challenging what I said, and challenging me in a cynical, skeptical way. ‘OK, what are you really doing here? What are your intentions? Or is this really (expletive)?’

“It was a roller coaster ride of emotions like I’ve never been a part of. I haven’t been put in a position where everybody thinks in some sort of fashion that you’re homophobic, you’re an imposter, this is all a game, and you’re a fraud.

“I was like, ‘Whoa!’ That when I realized that I really, really hurt some people far deeper than I had any idea.’’

Brennaman listened to the sickening stories. Messer told him how he was ready to walk into a gay bar out of college when a group of men approached him. The next thing he knew, he awoke in the hospital emergency room. He heard another man tell a story about how he was intentionally hit by a car, with the driver yelling the same slur. He wound up in the hospital for nine months, and taking two years to walk without a cane. Another man described being beaten by four men who broke his eye sockets and knocked out 12 teeth.

“I don’t think he understood the impact,’’ Messer said. “Most people who are not gay don’t understand the true impact of the world. It’s the magnitude of the word.

“Do I think he hate absolutely hates gay people? No. Do I think he made a stupid comment? Yes. Do I believe he can have a positive impact? Yes. He has a great deal of regret, but it wasn’t just him. It was being in an environment where he thought it was OK to use that word.’’

It’s a word, said former major-league outfielder Billy Bean – who came out as gay after his career – that was commonly used during his playing days. It was thrown around the clubhouse as frequently as a tin can of chewing tobacco. No one ever gave it a second thought.

Bean, MLB’s vice president and special assistant to commissioner Rob Manfred, who speaks to Brennaman several times a week, was proud to see the harsh backlash after the incident, particularly by the Reds’ players. Reds reliever Amir Garrett was among the first to tweet his support to the LGBTQ community, condemning Brennaman.

“I thought that was the best example of my work and the people that work in my office,’’ Bean said, “that players were unafraid to voice their opinion. No player would have done that five or six years ago. Even if they felt that way, they couldn’t say they did.

“I said Tom, ‘What you said felt like I was a player in the early 90s. When the manager, the clubhouse guys, players, even reporters could say that, and nobody would raise an eyebrow. People would giggle.’

“Those days, thankfully are gone.’’

But a former high school classmate remembers the then-teenaged Brennaman standing up for him against the slur some 40 years ago.

Brennaman was sitting in the stands at his high school football game his senior year at Anderson High School when a group of kids started bullying a gay classmate, Scott Seomin. They were calling him the same word. Brennaman turned around, and told them to cut it out. The taunting immediately stopped.

“I never forgot what he did for me that night,’’ said Seomin, now a psychotherapist in Los Angeles. “It’s very much imprinted in my brain. As a closeted gay high school kid in conservative Cincinnati, Ohio, in the early 80s, you just don’t come out of the closet. There was a certain amount of fear of being outed.’’

Yet, when you ask Brennaman, he didn’t have a single recollection of it until Seomin contacted him the night of the incident, asking to talk.

“When he said the he didn’t remember this,’’ Seomin said, “I said, ‘Of course you don’t. It wasn’t important to you. But it meant everything to me.’

Brennaman has spent the past six weeks seeking advice and counseling from Seomin, Bean and Messer. They gave him a list of books to read, films to watch, learning about the systemic prejudice against the LGBTQ community.

He began attending PFLAG meetings, a group representing parents and friends of the LGBTQ community. He listened to the heartbreaking stories from parents about how their children were ashamed to tell them they were gay. He visited a Northern Kentucky Children’s Home where kids were left homeless, kicked out of their house by their own parents for being gay or transgender.

Sure, he’ll tell you he’ll never fully understand the pain of the LGBTQ community, but he thinks he can help make a difference speaking out

“It was gut-wrenching to see what happened,’’ Marty Brennaman said, “but he’s going to prove to people he’s not the person who said what he said. It certainly doesn’t define who he is. He knows what he has to do, and the hurdles has to overcome, but there are a lot of people the gay community who are in his corner.

“But I worry about him. I talk to him every day to make sure he’s in the right frame of mind. I want to make sure, more than anything, mentally, he’s OK.’’