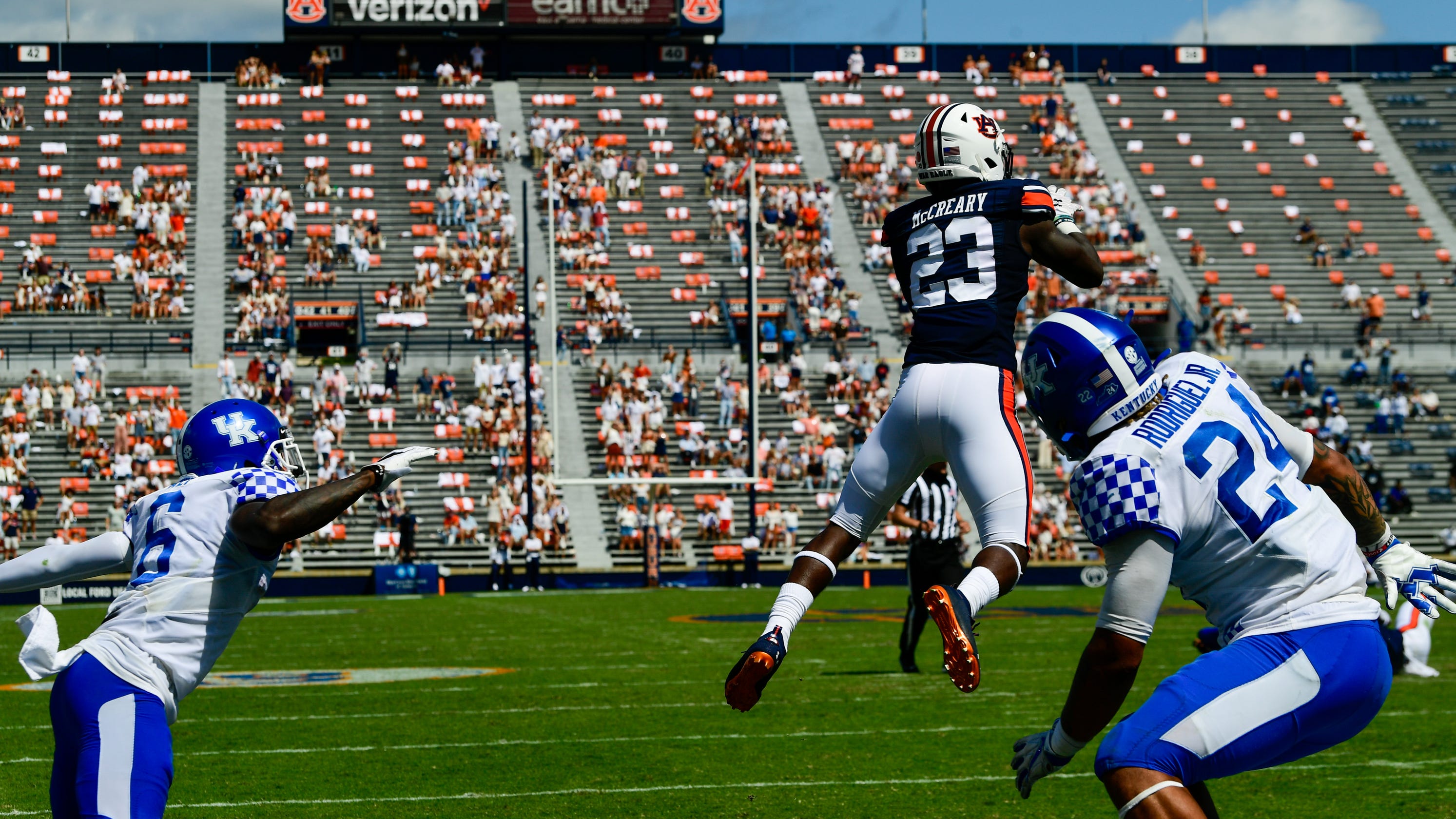 Under normal circumstances, a major-conference football program debuting a new head coach would welcome fans to its season opener.

That wasn’t the case Saturday for the Arkansas Razorbacks, who were playing their first game under Sam Pittman.

A message, posted around the stadium in Fayetteville, Arkansas, was this: “Thank you for NOT attending today’s game.”

That signage was directed at fans who showed symptoms of COVID-19 or were at risk, urging them to stay away this time. In Columbia, Missouri, similar signs mandated no gatherings.

The messages were a concession to the pandemic that shut down the nation and the sports world, delaying the start of the 2020 football season. The SEC marched forward with a cautious plan to start its season in late September while the Big Ten and Pac-12 canceled their seasons, then reconsidered.

That plan came to realization with the first week of play in a conference-only, 10-game regular season that saw stadiums limited to 25% of less capacity under safety protocols. Fans, for the most part, wore masks and remained distanced – although there were breaches. Bands played from the stands instead of marching on the field. Crowd noise was piped over loudspeakers to enhance the ambiance created by those spaced fans. Outside stadiums, tailgating was not on the menu.

HIGHS AND LOWS: College football’s winners and losers from Week 4

On the field, the sporting aspect was a mix of the familiar – Alabama throttling Missouri and Florida flexing muscle to spoil Lane Kiffin’s debut at Ole Miss – and the unexpected, with Mississippi State knocking off defending national champion LSU in Mike Leach’s first game as coach of the Bulldogs.

Here, as observed by reporters in the USA TODAY Sports Network, are snapshots from a strange start to SEC play:

Ole Miss: A game without a Grove

In a normal year, Ole Miss football takes a back seat on game day. The tailgating atmosphere at The Grove is often the bigger draw for fans.

That can’t be the case this year. Mississippi Gov. Tate Reeves banned on-campus tailgating through an executive order. So save for a few joggers who straggled through the empty, tent-less and chandelier-less ghost-town Grove, the most famed tailgating atmosphere in the SEC was a nonfactor for the first time in years.

The Grove stands empty just hours before the game between Ole Miss and Florida as The University of Mississippihas suspended tailgating on campus until further notice. (Photo: Thomas Wells)

The weirdest atmospheric aspect of the game? The public address announcer had to use pauses in the action to remind fans to wear their face coverings. Three times.

Arkansas: A fan who had to be there

Five buses carried the Arkansas football team to Donald W. Reynolds Razorbacks Stadium. Gregory Love was there with his hog-head hat, a foam finger and a Razorback mask to cheer the team as it drove past.

The pandemic couldn’t keep him and about 17,000 Razorback fans away in the season opener against No. 3 Georgia.

“I’m coming regardless,” Love, 42, from Benton, Ark. said. “I do love my Hogs, and football is part of my therapy for my disability.”

Love, who said he has neurological deficits and birth defects, was down when it looked like the season may not happen.

Something missing at Auburn

At Auburn, it was difficult to shake the feeling that something was missing, try as Jordan-Hare Stadium did to replicate a normal game day atmosphere. The crowd still did its traditional “Waaaaaaar Eagle” chant before kickoff, but to a video of the eagle flight from last year’s Iron Bowl rather than the real thing – SEC guidelines prohibit live animal mascots.

The 12,000 or so students still got plenty loud, but rather than being shoulder-to-shoulder in a party in the south end zone, they were spread out to all corners.

A man in the stands at Tiger Stadium in Baton Rouge had his mask pulled down below his mouth. An usher approached him: “Sir, please put your mask all the way on.”

By the end of LSU’s upset loss, the only noise in a tomb-like Death Valley was a smattering of Mississippi State fans in the south end zone whooping it up. The rest of the 21,124 were gone.

“The people that did come were loud and into the game for awhile,” LSU senior safety JaCoby Stevens said.

Ninety minutes before kickoff, it just didn’t look like a game day. The area near the stadium usually has bumper-to-bumper traffic. On this day, it was like taking the kids to see Mike the Tiger in his cage on a lazy Saturday in June.

After the final whistle, it was even quieter.

South Carolina: Fairgrounds with no fair

Williams-Brice Stadium in Columbia, South Carolina, is located in the middle of a large fairground. The acres of parking space were perhaps a quarter full two hours prior to kickoff of the Gamecocks’ game against Tennessee.

Nowhere to be seen were the festive, overflowing buffets and stocked coolers underneath large canopies with flat-screen televisions. Tents, TV’s and big spreads were banned in most lots.

“It was really an eerie feeling driving in,” said Marian Lindsey, who made the 140-mile trek from Beaufort with her husband, Rick.

At one parking lot entrance an attendant exclaimed to his co-worker, “Man, this is easy. We should be getting the heck out of here soon.” At a walk-in only entrance a block away, another masked attendant sat on a stool, snoozing.

Inside the stadium, “Sandstorm” played and white towels waved, albeit a lot fewer than usual. A socially distanced crowd of 15,009 watched Tennessee beat South Carolina 31-27.

“They were loud,” he said. “It might have looked empty, but it was loud, and they bring the energy for them.”

Texas A&M: A mix of normal and new normal

The atmosphere for Vanderbilt’s game at No. 11 Texas A&M looked like either 2019 or 2020, depending on which direction you faced.

About two-thirds of the stands at Kyle Field looked like a football game during a pandemic. Fans were spaced out, with several empty seats between small groupings.

But the so-called 12th Man – that is, the Texas A&M students and cadets – were packed together close enough to make someone forget that social distancing is the norm these days. They accounted for much of the volume during Texas A&M’s 17-12 win over Vanderbilt.

Texas A&M permitted 25% capacity, or about 27,000 spectators, to attend. The announced attendance was 24,073, including a few dozen Commodores fans.

And if anyone forgot about the unusual circumstances, they were reminded in bathrooms. Signs over sinks told patrons to wash their hands for 20 seconds – “about how long it takes to sing the beginning of the Aggie War Hymn!”