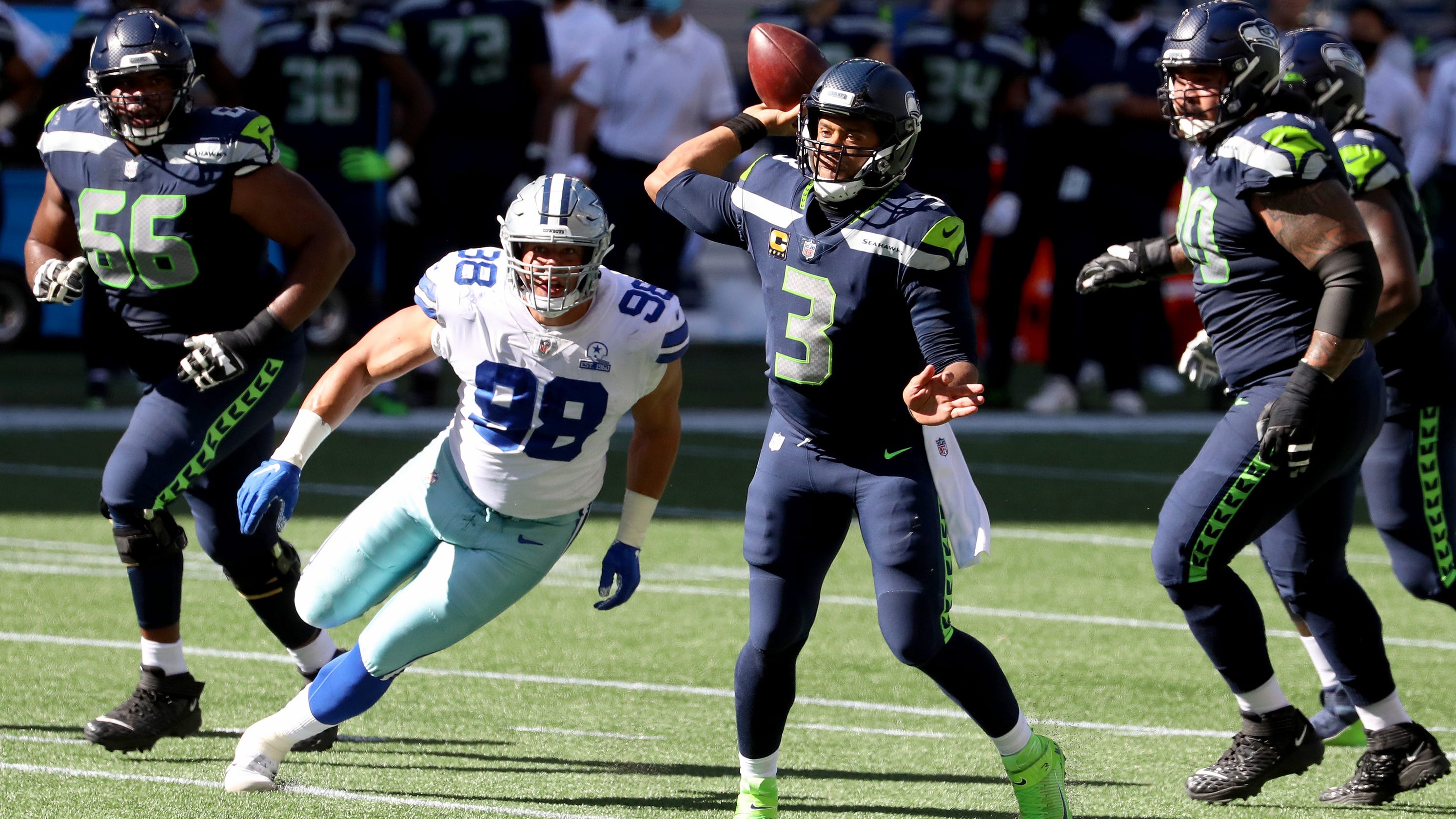 SEATTLE – If the polls were open now for MVP voting, Russell Wilson would win in a landslide.

The Seattle Seahawks star continued his sizzling start to the season by throwing for five touchdowns and 315 yards to fuel a 38-31 victory against the Dallas Cowboys and accomplish something that’s never happened before in NFL history.

Wilson raised his season total to 14 TD passes, most ever after three games as it surpasses the mark that the Kansas City Chiefs’ Patrick Mahomes established (13) in 2018.

Mahomes went on to win the league’s MVP award, while Wilson, in his ninth NFL season, has never received a single MVP vote despite brilliance throughout his career.

Still, Wilson is off to an MVP start, helping to keep the Seahawks undefeated (3-0) with clutch throws that included a 29-yard TD throw to DK Metcalf with 1:47 remaining that held up as the game-winner at an empty CenturyLink Field.

The Cowboys (1-2) tried to rally from a 15-point deficit for the second week in a row but fell short.

Russell Wilson #3 of the Seattle Seahawks looks to pass against the Dallas Cowboys during the second quarter in the game at CenturyLink Field on September 27, 2020 in Seattle, Washington. (Photo: Abbie Parr, Getty Images)

Three other things we learned from the Seahawks victory:

1. The spirit of Leon Lett lives on in the form of Metcalf — The Seahawks receiver gingerly coasted toward the end zone late in the first quarter, carelessly toting the football with one hand after burning Trevon Diggs for a would-be 63-yard touchdown. Shame on Metcalf for not finishing the play before he relaxed. Diggs, a rookie, recovered and punched the ball away from Metcalf and through the end zone for a touchback. Sound familiar? It sparked memories of Lett’s big blunder in Super Bowl XXVII, when Bills receiver Don Beebe slapped the football away as Lett, the Cowboys defensive tackle, cruised to the end zone. In the end, Lett’s gaffe didn’t prevent Dallas was winning a Lombardi Trophy as it blew out Buffalo. And Metcalf’s mishap didn’t burn the Seahawks’ chances either – especially after his 29-yard TD catch in the final two minutes saved the day. Perhaps the gaffe, though, provided a valuable lesson for the future.

2 The Cowboys have a new secret weapon — Cedrick Wilson had a breakout day, helping the Dallas cause with two long TD receptions of 40 and 42 yards on which his acceleration was on full display. The third-year pro finished with four receptions for 93 yards. How big of a deal was that? On a team with a deep bevy of receivers (Michael Gallup had six catches for 138 yards, with a 43-yard TD; Amari Cooper and rookie CeeDee Lamb had ample targets, too), Wilson was finally included in the mix. During the first two games, he played just four snaps on offense with zero catches … and zero targets.

3. Aldon Smith looks strong in his comeback — The Cowboys defensive end’s return to the NFL after more than four years in exile — a series of suspensions for violating the league’s substance abuse policy — is a stirring testimony for never giving up on a dream. Smith looks so much like the force who set an NFL mark with 33 ½ sacks during his first two NFL seasons with the 49ers, as he was a constant pain for Wilson. Smith finished with three sacks plus a deflected pass to notch a personal milestone in surpassing 50 career sacks.