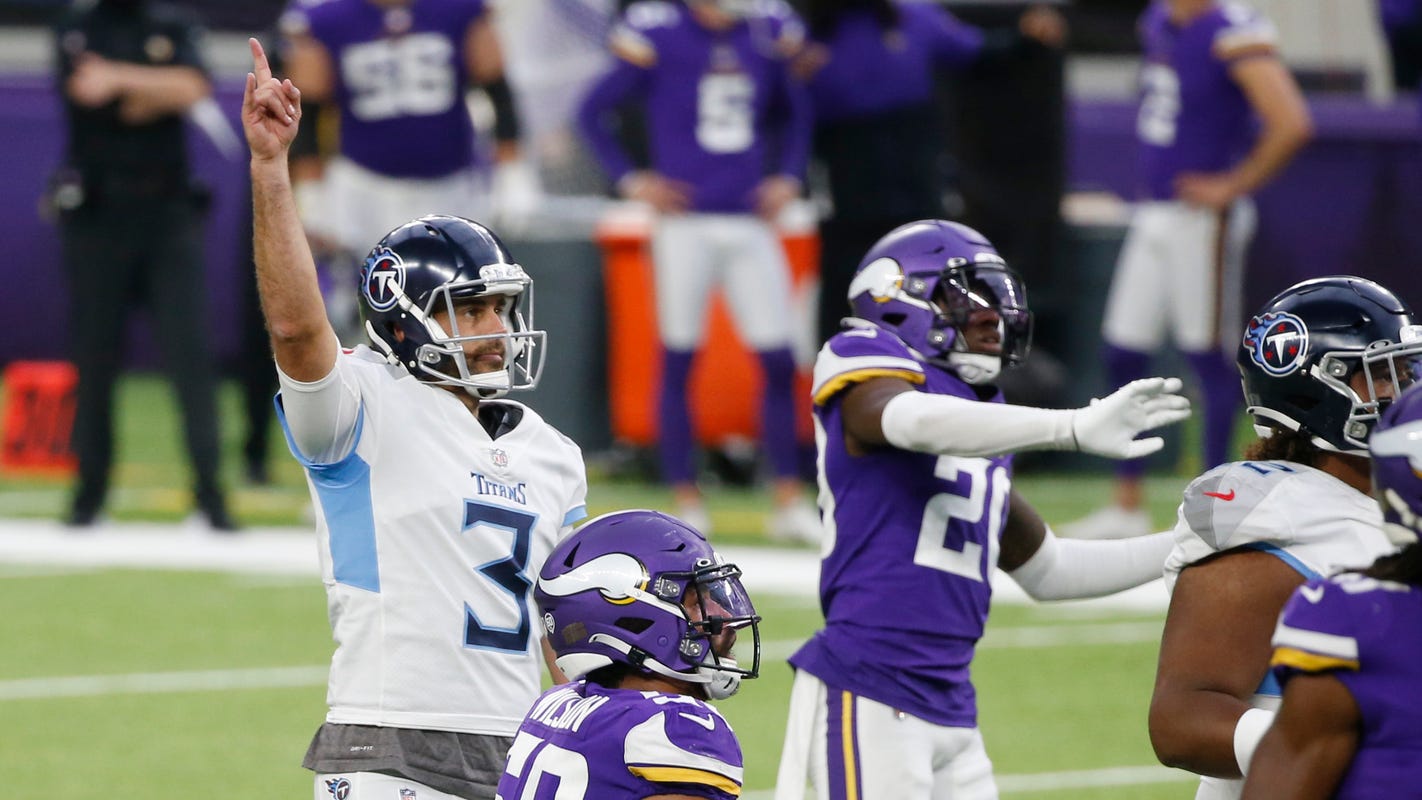 Because none of their three games to this point could be considered well-rounded – certainly not Sunday’s 31-30 win over the Vikings at U.S. Bank Stadium.

Again, it was the Titans offense – and kicker Stephen Gostkowski – bailing out a defense that still hasn’t figured things out, despite the addition of Jadeveon Clowney ahead of Week 1 and the debut on Sunday of offseason signee Vic Beasley.

Here are five observations as Gostkowski helped the Titans improve to 3-0 and the Vikings fell to 0-3:

Stephen Gostkowski is all the way back

The Titans kicking situation has resolved itself.

In fact, on Sunday, it saved them.

Gostkowski began his stint with the Titans by missing his first three field-goal attempts. But since those misses in Week 1, the veteran kicker is 9-for-9, including six makes in as many tries Sunday.

Gostkowski had three makes from beyond 50 yards, including a 54-yarder with 6:31 left that brought the Titans to within 30-28.

Then, with less than two minutes left, Gostkowski hit a 55-yarder that gave Tennessee a 31-30 lead.

It was Gostkowski’s third game-winner in as many games to start the season.

A week after Jaguars undrafted rookie James Robinson ran 16 times for 102 yards against the Titans in Week 2, Dalvin Cook had a field day Sunday, running 22 times for 181 yards.

The Vikings running back had two rushes of 39 yards, one of which went for a touchdown.

But it wasn’t only the run defense. Rookie wide receiver Justin Jefferson lit up the Titans’ secondary with seven catches for 175 yards and a touchdown.

A Vikings offense that looked abysmal and mustered just 11 points last week in a loss to the Colts posted 464 total yards of offense (to the Titans’ 444) in nearly toppling them.

The Titans defense’s credit, it got a couple of clutch, late stops again. The unit forced a punt with about four minutes left to set up the winning score, and Amani Hooker’s interception on the Vikings’ final possession sealed the win

Derrick Henry brings the Titans back

The Titans trailed 24-12 midway through the third quarter, but a couple of 1-yard scores by Derrick Henry changed the game in a hurry. With 3:53 left in the third, Henry’s punch-in capped an eight-play, 75-yard drive. The Titans defense then got a three-and-out, which Henry capitalized on by leaping high for another touchdown – less than three minutes of game time after his previous score.

They were Henry’s first two rushing touchdowns of the season. He finished with 26 carries for 119 yards. The Titans now are 10-0 (including the postseason) when he has at least 25 carries.

The Titans entered Sunday ranked first in the league in offensive red-zone percentage since Ryan Tannehill was named the team’s starting quarterback in Week 7 of last season.

So their early struggles near the goal line were uncharacteristic.

In the first half, they were 0-for-2 in the red zone — after entering the game 6-for-7 this season. And that didn’t include an interception that Minnesota had in the end zone, which was Tannehill’s first pick of the season. It came with the Titans lined up at the 29-yard line.

Tennessee also struggled mightily on third down, finishing 3-of-13.

One thing that was working well for the pass game: The big-play connection between Tannehill and Kalif Raymond. The duo hooked up on completions of 44 yards and 61 yards. Both of those plays eventually led to points.

Tannehill, who notched his third-game winning drive of the season, completed 23-of-37 passes for 321 yards and an interception.

For the third straight time to start the season, the Titans played in an empty venue that was pumped with artificial crowd noise.

At U.S. Bank Stadium, cardboard cutouts of fans filled the stands behind one of the end zones, and about 250 friends and family members of Vikings players were on hand.

Other than that, empty purple seats.

The streak will come to an end next week at Nissan Stadium after Nashville Mayor John Cooper announced earlier this month that fans would be welcomed back to the venue at 10% capacity (about 7,000 fans).