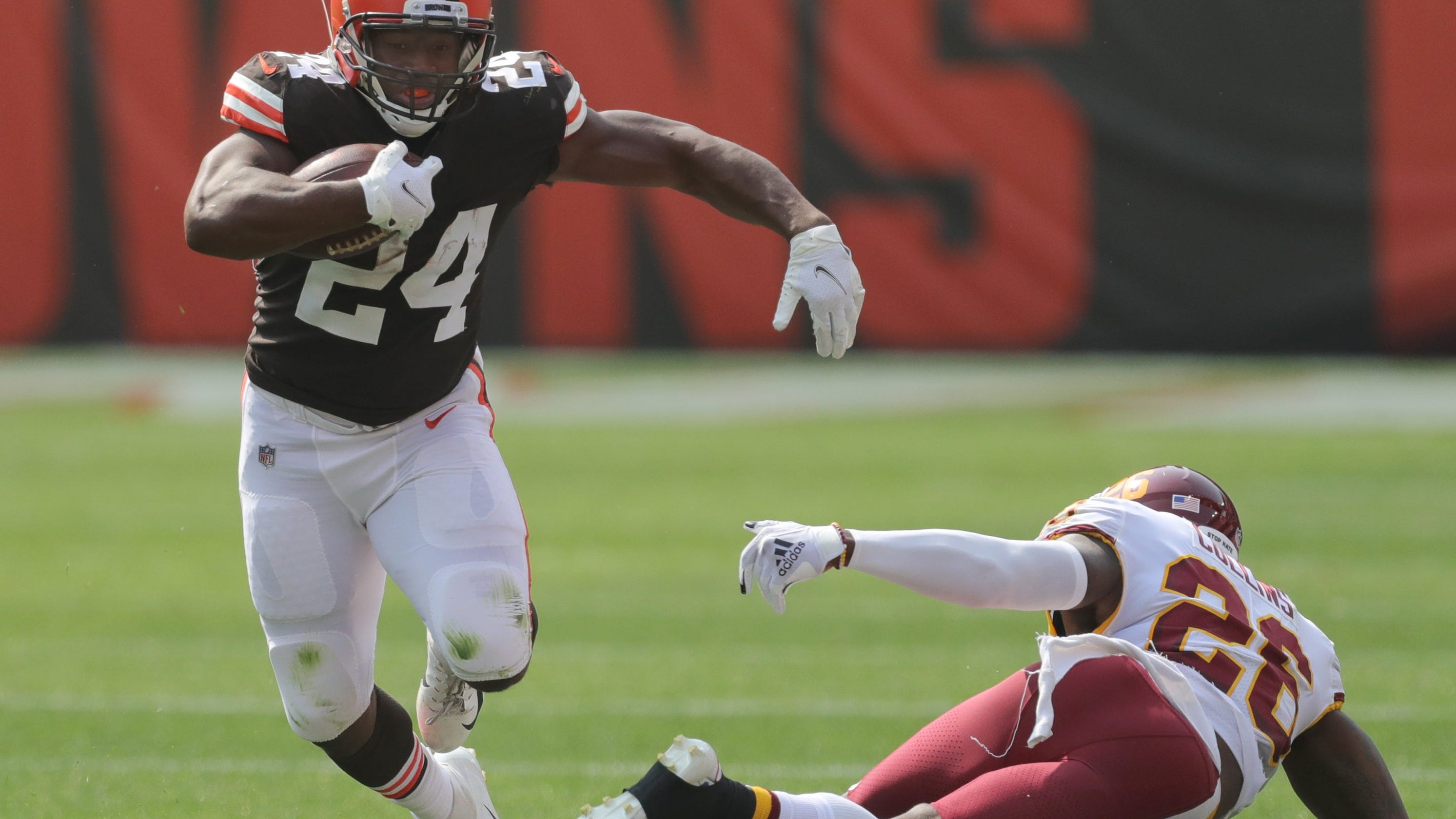 Cleveland Browns have winning record for first time since 2014


CLEVELAND – The Browns didn’t light up the Washington Football Team with an electric performance by quarterback Baker Mayfield and the rest of the offense.

But Mayfield and Co. were very opportunistic, scoring touchdowns off all three of the defense’s interceptions and a field goal off a fumble recovery, as the Browns rolled to a 34-20 victory on Sunday at FirstEnergy Stadium.

With the state of Ohio limiting attendance to 6,000 fans because of the COVID-19 pandemic, the Browns defeated Washington for the first time since Sept. 3, 2004. The Browns had lost their previous three games in the series.

The Browns have started a season with a record of 2-1 for the first time since 2011, when Pat Shurmur was their new head coach. They went on to finish 4-12.

Mayfield snapped his streak of eight consecutive games with an interception. It had been the NFL’s longest active streak, according to CBS Sports.

Washington quarterback Dwayne Haskins wasn’t as fortunate. He went 21 of 37 passing for 224 yards and two touchdowns with three interceptions for a rating of 58.8.

The Browns’ offense awoke from a slumber that lasted for nearly the entire third quarter and produced an 11-play, 75-yard scoring drive to regain the lead with 11:14 remaining in the fourth quarter.

The Browns went three-and-out during each of their first two possessions of the third quarter. They didn’t gain a first down in the second half until the final minute of the third quarter, when receiver Odell Beckham Jr. caught a 15-yard pass from Mayfield to convert on third-and-12 from the Cleveland 24.

Mayfield finished the same series by rolling to his right and delivering a 3-yard touchdown pass to rookie tight end Harrison Bryant on second-and-goal. Bryant’s first career touchdown allowed the Browns to go ahead 24-20 with 11:14 left to play.

On the ensuing possession, the Browns recorded their third interception of the game when middle linebacker B.J. Goodson made a sliding catch at the Washington 35 in front of receiver Dontrelle Inman with 10:03 remaining.

Three plays, later Chubb rushed for a 20-yard touchdown off the left side, and the Browns built a 31-20 cushion with 8:40 left.

Browns kicker Cody Parkey made a 30-yard field goal with 1:10 left a series after defensive end Myles Garrett registered a strip-sack against Haskins and recovered the fumble.

Washington trailed by 10 points at halftime, but it owned the third quarter.

Rookie running back Antonio Gibson capped a six-play, 49-yard drive with a 2-yard touchdown, and Washington trimmed its deficit to 17-13 with 9:05 left in the third quarter.

Then on its next possession, Washington earned a 20-17 lead when Haskins threw an 11-yard touchdown pass to Inman, who made the catch on third-and-goal between cornerback Terrance Mitchell and safety Karl Joseph with 2:20 remaining in the third quarter.

The Browns were revived on the next series and kept rolling the rest of the way.

They also rallied from a deficit in the first half and wound up leading 17-7 halftime lead.

Adding injury to insult, Washington lost rookie No. 2 overall draft pick Chase Young for the rest of the game early in the second quarter.

Not long after Washington ruled Young out with a groin injury early in the second quarter, Browns safety Karl Joseph intercepted Haskins’ pass intended for wide receiver Logan Thomas on second-and-25 from the Cleveland 41-yard line. Joseph returned 49 yards and fumbled, but Browns nickelback Tavierre Thomas recovered at the Washington 28 with 7:24 left in the second quarter.

Three plays later, the Browns capitalized on the takeaway when running back Nick Chubb rushed for a 16-yard touchdown, allowing them to go ahead 10-7 with 5:58 remaining in the second quarter.

Later, Browns linebacker Malcolm Smith intercepted Haskins’ pass intended for receiver Dontrelle Inman on third-and-7 from Washington’s 19 and returned 2 yards to the 24 with 1:55 left in the first half. Three plays later, Mayfield threw a 9-yard touchdown pass to running back Kareem Hunt, who bounced back from a drop on the game’s opening series, and the Browns went ahead 17-7 with 32 seconds left before halftime.

The Browns struggled on offense for much of the first half, but they took advantage of short fields created by turnovers. It also certainly didn’t hurt that Washington had lost Young, the defensive end from Ohio State who entered the weekend tied for the NFL lead with 2.5 sacks.

Mayfield and Co. didn’t produce a scoring drive until their third possession. Even then, they settled for a field goal. Cody Parkey capped the 13-play, 42-yard drive with a 42-yard field goal, cutting Washington’s lead to 7-3 with 10:46 left in the second quarter.

Washington drew first blood during its second possession. With Browns cornerback Denzel Ward covering him in the end zone, Inman caught a 17-yard touchdown pass from Haskins, allowing Washington to capture a 7-0 lead with 1:44 left in the opening quarter.

Earlier during the eight-play, 75-yard scoring drive, Ward nearly intercepted a pass from fellow Ohio State product Haskins, but Ward couldn’t hang onto the ball as receiver Isaiah Wright drilled him with 4:13 remaining in the first quarter. Ward entered the weekend listed as questionable to face Washington because of a groin injury, but he played through the injury.

Chubb led the Browns in the first half with 12 carries for 53 yards and a touchdown.

Through two quarters, Mayfield went 11 of 16 passing for 101 yards and a touchdown and posted a passer rating of 106.5. He nearly threw an interception, but Beckham broke up a deep pass with 13:35 left in the second quarter as safety Troy Apke tried to pick it off.