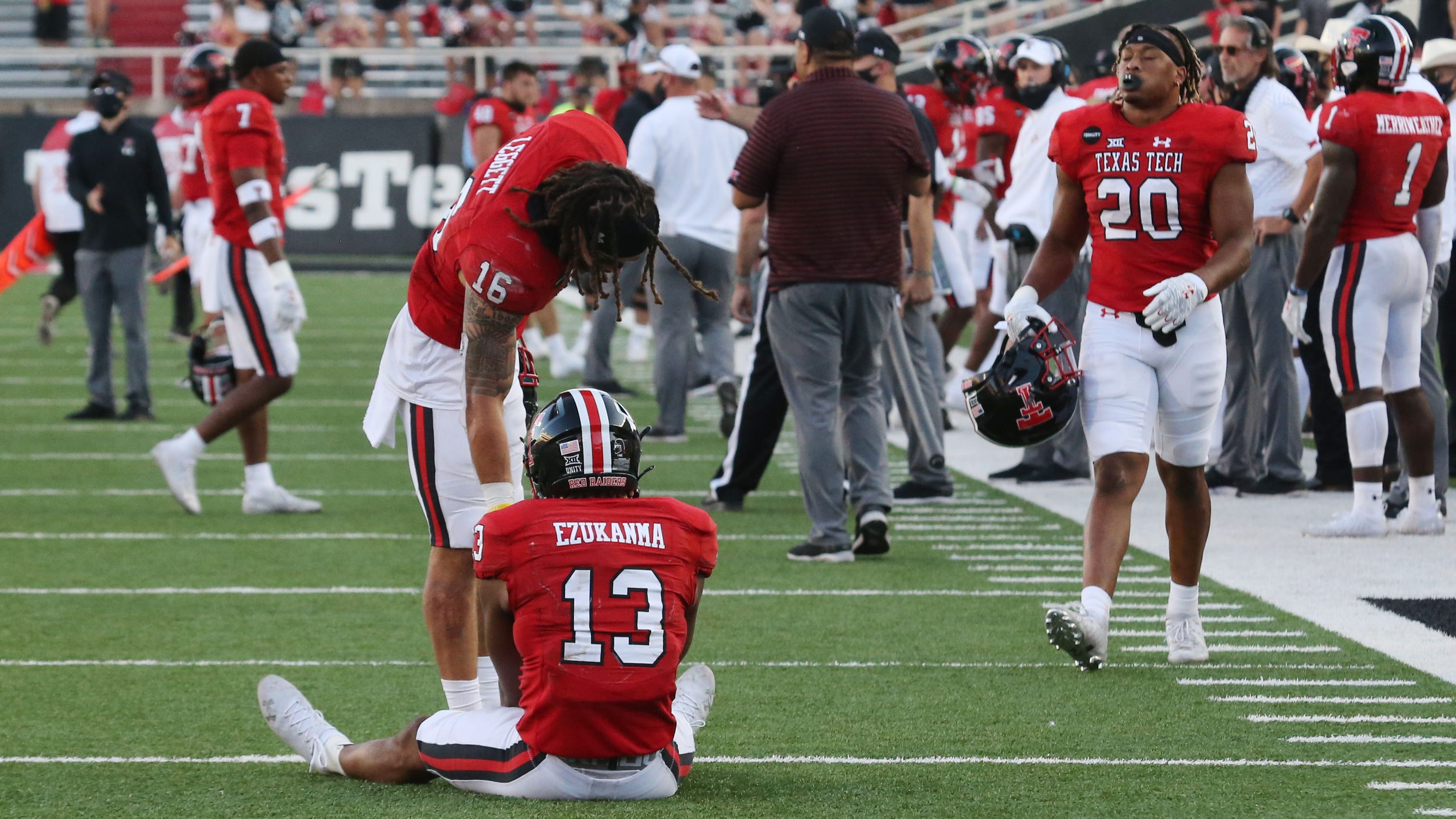 Texas Tech atop Misery Index after late-game implosion against Texas

If you’re a Texas Tech fan, you’ve seen some things over the last dozen years that would make less hearty souls lose all faith in the idea that watching college football is an emotionally sound decision.

From losing the most popular and successful coach in program history (Mike Leach) over an issue that had nothing to do with on-field performance to enduring a future U.S. Senate candidate who was practically mailing it in on the sidelines (Tommy Tuberville) to the Kliff Kingsbury era that was always better in theory than in practice, it’s been a pretty rough ride.

But has there been anything quite as disheartening in terms of single-game impact than Saturday’s ghastly implosion against Texas?

Though ESPN’s win probability tracker is far from a perfect scientific tool, the Red Raiders topped out at a 99.8 percent chance to win when they took a 56-41 lead with 3:13 remaining.

For any team, the confluence of mistakes it would take to lose the game from that position are almost too unrealistic to take seriously.

COLLEGE FOOTBALL TAKEAWAYS: The Big 12 is in big trouble

But somehow, Texas Tech found a way, which has to sting even more given that the Red Raiders have only beaten the Longhorns four times in the last 22 years. It was a rare opportunity for Texas Tech, and yet it slipped away in fairly straightforward fashion.

Down 15, Texas got the ball in good field position thanks to an ill-conceived pooch kick and scored on four plays with just 34 seconds coming off the clock.

Texas Tech failed to recover an onside kick that bounced high off the turf and hit one of their players in the hands.

Texas rather easily marched 42 yards down the field with 2:39 left on the clock and got a two-point conversion to tie.

Against a clearly exhausted defense, Texas scored first in overtime on three plays, then pushed Texas Tech backwards and ended it, 63-56, with an interception.

That’s a very bad way to lose, but what’s worse is that Texas Tech fans probably half-expected it somewhere in the back of their minds. At Texas Tech, it’s never over until it’s really over.

That’s the trauma they’ve built from watching so many teams that scored so many points and still lost, which was a fairly common occurrence under Kingsbury. In 2016 alone, Texas Tech lost a game 68-55 to Arizona State and another 66-59 to Oklahoma — both in regulation. Now that trauma continues under Matt Wells, which is why the Red Raiders are No. 1 in the Misery Index, a weekly measurement of knee-jerk reactions based on what each fan base just watched.

Oklahoma: It’s a good sign for your program when you’re consistently a three-touchdown favorite. As the gold standard of the Big 12, the Sooners are supposed to win most of the games they play — and usually by big margins. But the downside of that predicament is when you lose as a heavy favorite, which the Sooners did Saturday to Kansas State, 38-35, because it makes the analysis of what happened all the more intense. As ESPN’s Chris Fallica noted Saturday on Twitter, the Sooners have lost six times as a 20-point favorite or more since 2009, which may not sound like a lot until you consider that nobody else has lost more than three in that span. It’s got to get a little old for Oklahoma fans, who are in the conflicted position of enjoying three straight Big 12 titles and College Football Playoff berths under Lincoln Riley while also knowing the defensive product on the field is not good enough to win a title. That has been made clear in three straight semifinal losses, and it does not appear to be changing anytime soon. To be fair, the Sooners could have stemmed the tide by scoring just once in the fourth quarter — instead it was 17-0 Wildcats — but there are times when 35 points needs to be good enough to win for true championship programs.

Florida State: The Seminoles’ rivalry with Miami is one of the most even in college football. Generally, the trend has been one of the programs winning several in a row before it flips and then flips back again. But even when Miami has had the upper hand, as it did for a period in the late 1980s and early 1990s, then again from 2000-04, the games have been very close. With a couple exceptions, Miami just does not blow out Florida State. But Saturday’s 52-10 loss to the Hurricanes will go down in history as one of the Seminoles’ worst performances ever, and there have been a growing number of candidates for that dishonor over the last handful of years. From the first play of the game, it was a physical and mental mismatch, leaving only the jokes about how Florida State is now a basketball school. Hey, it’s kind of true. Though first-year coach Mike Norvell does not get all the blame for this — he wasn’t even with the team over the past week due to testing positive for COVID-19 — the Seminoles do not have the look of a team that bought into what they’ve been doing all offseason.

Texas A&M: Jimbo Fisher, the $75 million man, has won two-thirds of the games he’s coached since making the big move from Florida State. But even the most ardent Aggies fans would have to admit that the wins have largely been empty calories, with little on-field evidence that their program is positioned to compete for SEC titles. Those fans talked all summer about 2020 being the breakthrough behind one of the league’s most experienced quarterbacks in Kellen Mond, and opening the season with a commanding, complete performance against Vanderbilt would have given them the emotional fuel they needed. Instead, what they got was a 17-12 win that was in doubt until the final couple minutes, leaving the Aggies with a distinct sense of dread about what is to come next week when they travel to Alabama. The Aggies have some things they can clean up, like three fumbles and eight penalties. But not being able to sustain drives as a 31-point favorite is a big red flag about whether there’s really been the kind of progress A&M is paying for. They hired Fisher to become an elite program. So far, they are not.

LSU: If you’ve been paying close attention to Ed Orgeron over the last calendar year, his frustration with former defensive coordinator Dave Aranda has manifested in some oddly passive-aggressive comments. One of them came on Sept. 15, when Orgeron told the media, “We are so much better on defense right now than any part of the season last year,” and praised new coordinator Bo Pelini’s more aggressive 4-3 scheme as opposed to the 3-4 Aranda preferred. It’s only one game, but you might want to re-think that one, Ed? LSU’s defense last season may not have been elite all year long, but it was extremely good by the end and good enough to win a national title. The defense we saw in a 44-34 loss to Mississippi State? Not even close. LSU may have generated five sacks — the lack of which under Aranda was a constant point of concern for Orgeron, a former defensive line coach — but what good does that do when you’re giving up 623 passing yards to the Air Raid? LSU was primed for a step back this year because of how much talent they’ve lost, but even with a national title on his résumé, the grace period for Orgeron if this is actually a huge step back will not be that long.

Texas: Much like their Aggie brethren, the Longhorns make this week’s Misery Index despite a win because of the anxiety they induced with a fairly disgusting performance in Lubbock until the last three minutes of regulation. Sure, they made some things happen offensively and recovered an onside kick that gave them a chance. But how can anyone have much confidence in Texas after watching how sloppy they were on both sides of the ball, how poorly their offensive line played and how lucky they were to escape a Texas Tech team that beat Houston Baptist by two points in its opener?

TCU: After four false starts to their season due to COVID-19 issues, the Horned Frogs finally got on the field. And they looked every bit like the middling Big 12 program they’ve been recently in a 37-34 loss to Iowa State. TCU gave up touchdown plays of 75, 49 and 32 yards, which is not very characteristic of a Gary Patterson defense. Since the 2017 Alamo Bowl, however, Patterson is just 12-14 overall.

Louisville: It is not unusual for coaches whose teams over-perform in Year 1 to regress a bit in Year 2. Still, it’s not that fun while it’s happening — and it’s pretty clearly happening to Louisville. The Cardinals actually carried some expectations into this season after a surprise 8-5 record that earned Scott Satterfield ACC coach of the year honors. But a 23-20 loss to Pitt, following last week’s 47-34 loss to Miami, it’s clear Louisville is just a cut below the top tier of the ACC. Quarterback Malik Cunningham struggled, throwing three picks, and the Cardinals’ running game only generated 41 rushing yards on 29 carries outside of one 75-yard touchdown run.

NC State: The Wolfpack got blown out 45-24 by a Virginia Tech team that had multiple season openers postponed due to COVID-19 outbreaks, hasn’t had a full roster practicing in several weeks and announced prior to kickoff that 23 players (including starting quarterback Hendon Hooker) and two coaches were not able to participate in the game. That isn’t a great look for Dave Doeren.

“Is there any doubt we are cursed?” – RedRaiderSports.com

“Honeymoon over for Riley!” – OUinsider.com

“FSU should have hired Deion” – Warchant.com

“Most degrading win…maybe ever” – TexAgs.com

“That game was so bad that the CARDBOARD people left real early” – TigerRant.com (LSU)